The Colombian town of Mocoa sits in a picturesque part of the country where the Andes crumbles into the Amazon – it’s a mixture of jungle, monkeys and waterfalls. But last March, torrential rain to the Putumayo region turned Mocoa into a town of tragedy. A third of the region’s expected monthly rain fell in just one night, bringing an onslaught of mud, trees and rocks.

More than 250 people died, while hundreds were left without shelter as whole neighbourhoods were crushed by the landslides.

The UK-based charity ShelterBox was alerted to the crisis by Rotarian Gloria Cajavilca.

A plaintive message posted on the charity’s Facebook site from the Secretary of the Rotary Club of Bogota DC read: “I’d like to know how we can bring ShelterBox to Mocoa, which yesterday suffered a major collapse in which there are many victims.”

Within days, a team was in Colombia working with the Red Cross tackling one of the worst natural disasters in the country’s history.

CEO Chris Warham explained how they already had ShelterBoxes waiting in the Colombian capital, Bogota, with more aid on standby at a pre-positioning hub in Panama.

He said: “Together with the Red Cross, we met with the Colombian government who told us that their strategy for people displaced by the landslide is to get them into rented accommodation in the medium term.

“But that is clearly going to take between three and six months to happen, so there is a distinct short-term shelter need.”

Two ShelterBox team members flew out to Mocoa to help distribute ShelterBox aid to families who have lost everything. The standard contents of a ShelterBox include a family tent, water filters and mosquito nets to combat disease, solar lighting for when power is down, a groundsheet and blankets, kitchen sets, even activity packs for children to provide some sense of normality.

When buildings are partially damaged, ShelterKits are distributed. These contain crucial equipment such as tarpaulins, tools, saws, shovels and nails, helping families to repair their homes or to make basic shelters while rebuilding their lives.

Dave Ray, one of the ShelterBox operations co-ordinators, was met by Rotarians in Bogota when they arrived in the capital.

He said: “It really shows our organisations’ commitment to work together to bring the best assistance possible to the affected families in Mocoa.

“We were met at such short notice by high members of the Rotary Club of Colombia District 4281, which really attests to the level of commitment and support from our Rotary partners.”

Chris, a recently inducted Rotarian with the Rotary Club of Cober Valley Helston, admitted he had no idea how long their team will remain in Colombia. “How long we are there completely depends upon what need we see,” he explained.

In 90% of all deployments, the first call we make is to a Rotarian.”

Liz Odell is one of many Rotarians who volunteer for ShelterBox. She has served in Colombia, so knows all too well the issues her colleagues are facing in the country.

“If you are the first team to arrive on the ground after a disaster, it can be hard to find the information you need because there are so many conflicting reports,” she said. “I wouldn’t say it is chaotic, but it is getting numbers going out there and seeing things for yourself.”

A Past President with the Rotary Club of Nailsworth, the former stockbroker revealed that you have to set emotions aside to get on with the job.

In April 2015, 9,000 people were killed and 22,000 injured when two earthquakes ripped through Nepal in quick succession. Liz was in Nepal for three weeks, distributing 39 metric tons of tents and ShelterKits to the villages.

She added: “I got to Nepal four days after the earthquake and even then a lot of people hadn’t been able to get out into the mountains and the foothills of the Himalayas which were the worst affected because the roads had been blocked by landslides.

“When we got up there, entire communities were gone. Ninety-five per cent of the buildings in these towns were totally gone. I had never seen anything like it.

“But you have to set aside your emotions. You are there to get a job done.

I can get on a plane after three weeks and go home, but these families have just had the worst day of their life and they are going to be facing this for months and years to come.”

In Nepal, men shave their heads as a mark of mourning if they have lost a family member. When Liz and the ShelterBox team arrived, there were many shaved heads.

“We met one man who had put his tent up at the top of a mountain ridge in a very poor community,” recalled Liz. “He told us how his house had gone and he had nothing apart from what we were standing in. There were just piles of rubble.

“He said that when ShelterBox came along, it was like an angel from heaven arriving giving him a tent. That was really moving.”

ShelterBox has 250 trained volunteers who make themselves available to head off around the world at a moment’s notice.

The charity receives no government funding, and relies on private donations, around 30% from Rotarians and Rotary clubs. A small but fast-growing humanitarian agency, last year ShelterBox helped 29,652 families across the globe.

“Rotary is a hugely important partnership for us,” added Chris.

“Rotarians are always well connected. Rotarians always have the ‘service above self’ motto engrained in what they do, so you can almost be certain that if you speak to someone whose community is struggling, they will help you.” 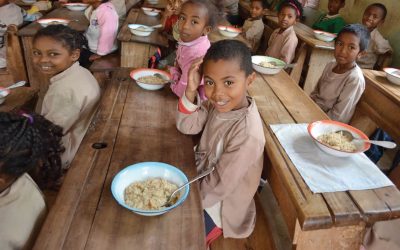 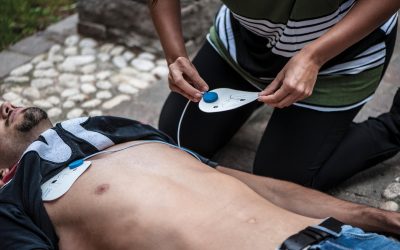 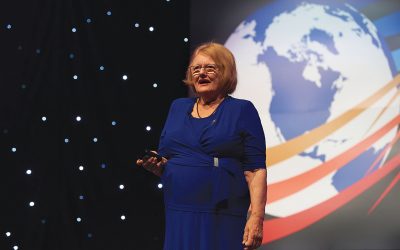 Making a meal out of polio