A selection of stories showing the lengths that Rotarians in Great Britain & Ireland have gone to help those dealing with the conflict in Ukraine.

Rotary has collected thousands of pounds to support the victims of the war in Ukraine. Karen Eveleigh, District Governor for Rotary in the Thames Valley (1090), reflects on the work of clubs in her district:

Clubs and Rotarians across our district have continued to work with local organisations and use their contacts with Rotary clubs in Ukraine and neighbouring countries to support those affected by the war.

Many clubs held successful collections in their town centres and shopping centres.

Rotarians from across the district gave over £3,000 at our district conference in Oxford, after hearing from Rotarians Allan Smith and John Philip about Rotary’s Ukraine Taskforce.

Clubs are doing their bit to tell their Facebook followers how Rotary is operating.

From a Marlow Thames Rotary Facebook post: “The Rotary clubs of Marlow and Marlow Thames joined forces to hold a street collection in aid of the Ukraine.

“During the day, 26 Rotarians and friends filled one-hour slots and collected over £4,000 from generous Marlovians and visitors to the town. 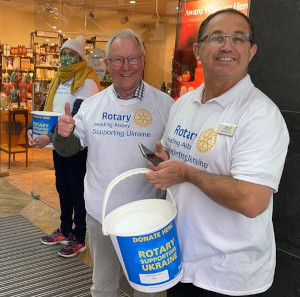 “After adding gift aid, the clubs will be donating over £5,000 to the International Rotary Fellowship of Healthcare Professionals.”

Reading Matins Rotary were also active on Facebook stating: “Like the rest of the world, members of Reading Matins have been horrified by the war in Ukraine and its devasting effects.

“In order to support in both financial and practical ways, our members immediately voted to donate £1k to The Red Cross, and joined forces with Woodley Netball Club to organise a collection of shoeboxes full of essentials.

“The huge numbers of shoeboxes pictured, contained essential items such as batteries, underwear, toiletries for Ukrainian refugees and have since been transported to those in need.”

Windsor St George Rotary is organising a sunflower growing competition, with all funds going to its Ukraine appeal.

Marlow Thames Rotary has worked with scout groups across Buckinghamshire to collect medical and other items. These will be delivered to Banbury Rotary since the club is working with a Polish community group who are delivering items to the Polish-Ukraine border.

Bourne End & Cookham Rotary lit up their peace garden with blue and yellow lighting and paper peace doves. They also donated £5,000 to the Fellowship of Healthcare Professionals.

Dublin-Fingal Rotary was at the forefront of many of Ireland’s 72 Rotary clubs by managing to raise over €3,000 for the Ukraine in two days. 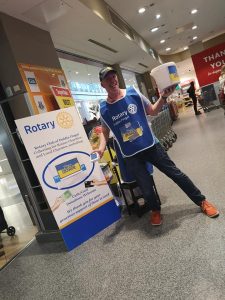 The club had already sent €10,000 directly to a Polish Rotary club situated close to the Ukraine border. They will use the money to support Ukrainian refugees who are fleeing the conflict.

The club received a staggering response from shoppers during a weekend collection in the Irish capital.

Club President David Normoyle said that he was humbled by the generosity of the people of North County Dublin: “We collected almost €3,000 over the two days. That’s an incredible amount considering that there are so many charities appealing for money for Ukraine.”

David Murray, the District Governor for Ireland, who is also a member of the Dublin-Fingal club, thanked members for their commitment to the project.

Bedfordshire Rotarians came together to support a Ukrainian family who have fled the conflict.

Members of Sandy, Biggleswade and Biggleswade Ivel Rotary clubs came together to clean, decorate and furnish an empty house for a Ukrainian mother and her two daughters, aged 17 and 8, fleeing the conflict in their homeland. 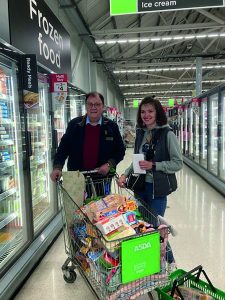 A local fencer repaired the garden fence and the combined Rotary clubs got the house ready using manpower, donations from Rotary fund-raising and generous local donations.

Rotarian Ron Parsons from Sandy Rotary went shopping with Biggleswade resident and Ukrainian national Nataliiya to get the essentials for the new home.

Problems happened at the border when two of the family were held back, with only the 17-year-old allowed passage to the UK.

By the time the paperwork had cleared, flights were £200 more expensive – so the Rotary clubs contributed funds to help make up the difference and allow the family to be reunited safely in their new home in Biggleswade.

Another four families have been settled in the local area with help from the Rotary clubs. The clubs received £1,000 from the District 1260 (Rotary in Bedfordshire, Buckinghamshire and Hertfordshire) Ukraine Disaster Relief Grant.

There has been no let-up in the work of Christchurch Rotary who, at an early stage in the Ukrainian conflict, donated £1,000 to the Red Cross appeal and gave a further £1,000 from its own funds to the International Rotary Fellowship of Healthcare Professionals.

The Dorset club also donated £2,000 from its own charitable funds to a sister Rotary club at Chelm in Poland, close to the Ukrainian border. 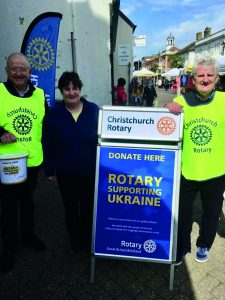 The members of Christchurch Rotary collecting for Ukraine.

This will help Polish Rotarians to provide immediate humanitarian assistance to Ukrainian refugees.

The money is being earmarked to buy shoes and medications for children.

Vincent Banks, President-Elect of Christchurch Rotary said “It was wonderful to meet Agnieszka Grzywaczewska, the President of Chelm Rotary Club by Zoom.

“We were most impressed by the help that her Rotary club has provided to Ukrainian refugees, in cooperation with other Rotary clubs from Poland, Germany, France and Israel.

“We will continue to look for more ways to help!”

Christchurch Rotary Club then went on to organise a street collection in the town in April which raised £678.99.

Glenrothes Rotary in Scotland has been working on a number of fronts to support the crisis in Ukraine.

The club has been supporting a Ukrainian family which has settled in the Fife town, as well as organising the collection and delivery of humanitarian aid to the country. 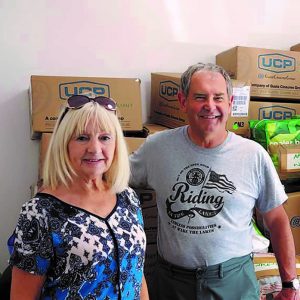 Rotary President, Brian Johnson, his wife Kay have been at the forefront of collecting goods destined for Ukraine stored at the Gilvenbank Hub. This included clothing which was cleaned and then sorted into categories, along with toiletries, nappies, medicines and non-perishable food.

So far three loads of goods have been transported, with the community in Glenrothes rallying round the appeal.

The club has also been supporting a Ukrainian family in the town who, after wading through plenty of red tape, managed to settle in Glenrothes with family, having fled the country.

The Rotary club managed to find bikes for the three children. The Ukrainian family returned the favour by taking part in a Rotary litter pick.

A number of Rotary clubs in Great Britain & Ireland have worked with charities and transportation companies to ship much-needed humanitarian aid to Ukraine.

Andrius Zubernis, a pastry chef based in Dungannon, Northern Ireland, headed to Lviv with a field kitchen, food, medical and toiletry supplies for the Ukrainian people. 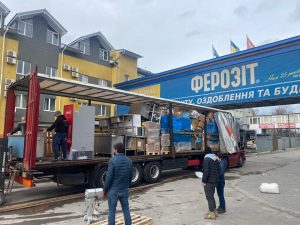 Funded in part by Rotary Ireland, the lorry and its driver, Krzysztof Czerwinski, were supplied by A1 Transport.

Enniskillen Rotary members turned out to assist with the packing and loading up.

Andrius is putting his skills to use from war zone location in Lviv distributing 500 to 1,500 meals a day to civilians in the country.

The East London-based Stratford Rotary and the Isles of Scilly Rotary partnered with Rotary clubs in Ukraine to send a lorry load of humanitarian assistance to help disabled people and wounded soldiers.

The clubs teamed up with Kyiv Synergy Ukraine, Lviv International and Kharkiv Multinational Rotary Clubs, with the aid being sent to Kharkiv.

Meanwhile Derby Rotary teamed up with the charity Teams4u to send two lorry loads of aid to Ukraine.

Rudolph gets a makeover!

Rotary on Merseyside struck on a clever way of fundraising for the Ukraine. They converted their Santa sleigh into an Easter float emblazoned with Ukrainian colours. 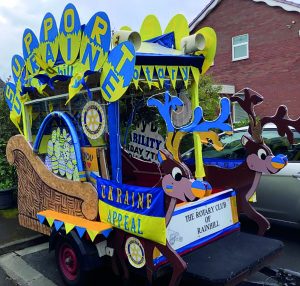 Rudolph with his new look!

Rotarian Mike Gaffney hatched the idea to change the float beyond recognition, apart from the reindeer, who would have Ukrainian blankets, with Rudolph sporting yellow and blue colours on his antlers and nose.

The club managed to receive permission from St Helens’ Tesco and Asda supermarkets, and over the Easter period collected £4,000 for Rotary’s Ukraine appeal.

The club even got sponsorship from Rocket Embroidery to wear special t-shirts for the occasion.

Devon Rotarians, Roger Byrom and Patrick Farrelly, have recently returned from Hungary after delivering aid to Ukraine close to the border.

“The experience is a fine example of the international family of Rotary working together for the better good,” said Patrick, a member of Braunton Caen Rotary. 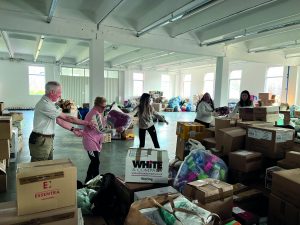 Braunton Caen Rotarian Patrick about to receive a package.

The Devon club worked closely with Frici Németh, a Rotary District Governor from László, who connected them with the Rotary Club of Kisvárda, a small town lying 12 miles from the border with Ukraine.

St Brannock’s Church in Braunton Caen offered use of a minibus, and two other vans were supplied by local people.

This club was already heavily involved in collecting aid and sending it across the border to the Rotary Club of Uzhhorod, but after setting up a ‘Ukraine Braunton Community Response’ Facebook page, and producing posters appealing for goods, the response was overwhelming.

“The local Tesco store was stripped of nappies, baby food and ladies’ hygiene items; members of the community bombarded us with donations, both physical and monetary,” said Patrick.

The pair made a 33-hour 1,500 mile trip to Kisvárda, where 20 Rotarians and helpers were on hand to unload the six tons of aid.

Rotary clubs have been involved with the delivery of fire engines to Ukraine to support the fire service in the country. 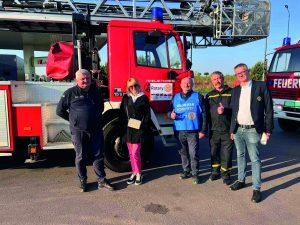 Rotary clubs have been involved with the delivery of fire engines to Ukraine.

Rotary in Somerset, along with parts of Wiltshire and Dorset (District 1200) joined Rotary districts from across the world to provide funding for the fire trucks, which were delivered on the Polish-Ukrainian border.

The Rotary clubs of Weston and Yeovil, along with Elgin Breakfast Rotary from Scotland, were prominent in their support.

The Somerset District has been active in its support, donating £10,000 to Rotary in Poland, Moldova and Hungary, as well as £5,000 to Rotary Lviv International in Ukraine via a Polish Rotary club, plus £5,000 to Water Survival Box.

More than £100,000 has beensent from the west country Rotary clubs to support people from Ukraine, including individual clubs sending support directly.

Wylde Green Rotary Club from Sutton Coldfield, West Midlands, has sent £1,200 to the Rotary-originated charity ShelterBox, to help the people being displaced due to war, in Ukraine.

ShelterBox is a UK-based international disaster relief charity which has had a team in eastern Europesince the end of February responding to the war in Ukraine. The charity has spent time in Poland, Moldova and Lviv in western Ukraine. 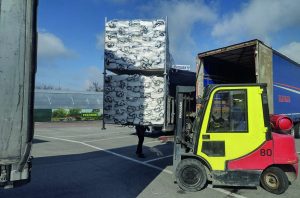 ShelterBox is providing mattresses to collective centres in Lviv, Ukraine.

ShelterBox is providing mattresses to collective centres in Lviv, Ukraine. Working with People in Need, distributions began in March and the delivery of mattresses is continuing throughout April.

They started distributing shelter kits and other essential items to help people in Ukraine survive in damaged buildings. Working with their partner Relief Aid, they are moving aid across Ukraine.

The charity will be supporting refugees in neighbouring countries with high priority items they can carry with them, like hygiene items and cash.

Their teams are working with government representatives, other humanitarian organisations and Rotary in Moldova to draw up our plans.

They have been visiting collective centres as well as conducting needs assessments at a reception centre in Moldova not far from the border with Ukraine, where many refugees have been arriving. 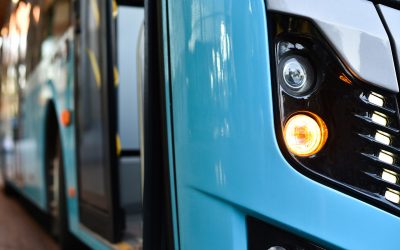 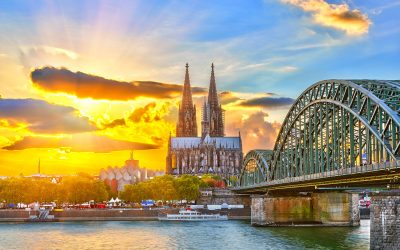 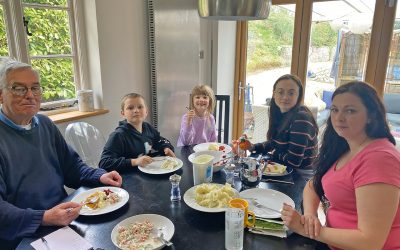