Under the gaze of Welsh heroes hewn from Sienna marble, the fifth Rotary Champions of Change Awards evening unveiled more of its heroes.

The setting was the Marble Hall in Cardiff City Hall — chosen to honour Rotary’s centenary in Wales and the annual awards night.

Hosted by HM Lord Lt for South Glamorgan Morfudd Meredith, the event saw 12 Rotary members from across Great Britain and Ireland and seven Community Champions receive their recognition under the gaze of Hywel Dda (King Howell the Good) and Saint David, patron Saint of Wales.

This year’s winners were again recognised in two categories, Home and International, with humanitarian service ranging from supporting the elderly in London and feeding the homeless in Crewe, to training doctors in Ethiopia and organising convoys of aid for displaces people in Europe.

Having been made an honorary Rotary member in Cardiff last year, Mrs Meredith, said she had always been aware of the great work of Rotary.

“Tonight is particularly special in taking pride that Rotary in Wales celebrates its centenary,” she said.

“Rotary has played an important part over the century and is helping build communities together. As Her Majesty the Queen’s representative I pay tribute to Rotary. Thank you for making a difference and thank you for choosing Cardiff this year.”

I encourage every one of us to be change makers. Making a difference is in the DNA of every Rotary member.”

In presenting his two Presidential Awards, Rotary in Great Britain and Ireland President Denis Spiller also paid tribute to the 100 years of Rotary in Wales, making a difference to the futures of children and families throughout Wales.

He said: “I encourage every one of us to be change makers. Making a difference is in the DNA of every Rotary member.”

“To make a difference to Rotary itself is not so easy, but so worthwhile” he said, but two members who had helped make that difference were Brendan O’Shea for attracting 13 new members to his club; and Andrew Errington MD of Shortland Group, for his tenacity in recognising the problems with his club and revitalising it to move forward with renewed energy.

He went on to introduce Chair of the National Council for Voluntary Organisations Peter Kellner who said that since taking over the Chair 18 months ago he had realised that everyone could have big dreams and big ideas but they came to nothing unless they affected lives of people nationally or internationally.

“I have also learned two secrets,” he said. “The first secret of volunteering is that people get something back, but it goes further at its best — and you here are its best — it changes lives and changes communities, and how rewarding that is.”

“The second secret is that if you add it all up volunteering is a very important part of Britain’s society and economy — if added together it is worth £45 billion.”

“Our world of volunteering has a massive part to play and we should be reaching out to politicians through civil servants, MPs ad local government and saying we would like to be your partners — doing the things that do best.”

“This role is simply enormous. We need to get out there and tell the stories — like the stories you all have to tell today.”

He went on to present the awardees with their Champions pin and certificate in collaboration with national President Denis Spiller.

You can read more about the amazing work this year’s winners got involved in here. 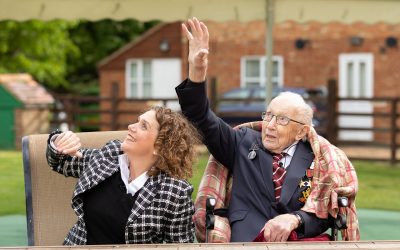 Captain Sir Tom Moore has been awarded a prestigious award by Rotary in Great Britain and Ireland. Plus, his daughter, Hannah Ingram-Moore, will be an upcoming guest on Rotary GB&I’s togetherTalks series. 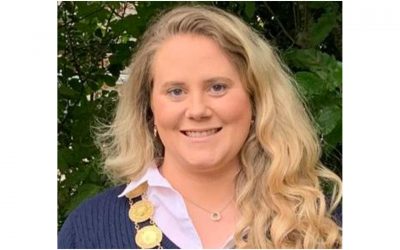 July 1st is traditionally the time when clubs herald the start of the Rotary New Year. Because of lockdown, many of the president handovers have been organised virtually, or with social-distancing.