I think the day it happens will be a worldwide celebration,” says Manoj Joshi as he contemplates the seemingly-approaching moment where it is confirmed polio has been eradicated from the world.

Joshi, a retired pharmacist from Bradford and former district governor of Yorkshire and North Lincolnshire for Rotary International – the humanitarian organisation that has been at the centre of the decades-long fight to end the killer disease, is speaking shortly after it was announced Africa has now been certified as free of wild polio four years on from Nigeria recording its final case.

It leaves just Pakistan and Afghanistan as the only two countries in the world continuing to see wild poliovirus transmission.

He says the end of the disease is now very much in sight despite the challenges of reaching the remote communities where immunisation has not yet taken place.

“I think that in the next two to three years we will see an end of it.

The current situation represents an extraordinary success in the long fight against polio, which usually affects children under five and can lead to paralysis and death.

In a challenging year for global health, the African region's wild-polio-free certifiction provides a clearer vision of a polio-free world. Learn more in this op-ed from Rotary member Charles Cogan: https://t.co/3ZjlBnpF4W #endpolio

While there hasn’t been a case of polio caught in the UK since the 1980s, progress has been slower around the world in eliminating the disease.

In 1979, Rotarians began a vaccination programme in the Philippines and the success of that programme led the organisation – which has over one million members across the world – to launch an ambitious effort to eradicate polio from the world in 1985.

It became a founding member of the Global Polio Eradication Initiative three years later and in the past 35 years, more than 2.5 billion children have received the oral polio vaccine.

The news is not unequivocally positive – just one week after the World Health Organization declared Africa free of wild polio it announced a new outbreak in Sudan was linked to the oral polio vaccine that uses a weakened form of the virus.

Across Africa, 172 such cases of what is called “vaccine-derived poliovirus” have been reported in 14 countries so far in 2020.

The @WHOAFRO region is officially certified free of the wild poliovirus! Learn how @Rotary and its partners made it possible to #endpolio in the region: https://t.co/HiBFfdcRMD pic.twitter.com/WC1eBth3la

But compared to what the situation was back in 1996, when 75,000 children were paralysed in Africa by polio, the situation has improved to an extraordinary degree.

“It has been a massive achievement. It will only be the second time in history where a debilitating disease like this has been eradicated from the world forever, with the first being smallpox. Now we hope the third one could be Covid.”

The mission is a very personal one for Joshi, whose car is decorated with End Polio Now insignia.

A Ugandan of Indian-Gujarati origin, he arrived in England as a refugee during the Idi Amin crisis in 1972 where the President of Uganda ordered the expulsion of the country’s Asian minority.

He says he remembers having the polio vaccination himself as a child in Uganda.

Joshi joined the Rotary’s teenage chapter when he was still living there.

After moving to the UK, he joined the Bradford Rotary Club in 1983; going on to serve twice as the branch’s chairman and being involved in many of the organisation’s fundraising efforts and promotional campaigns for its polio vaccination programme.

Earlier this year, Joshi led a delegation of British Rotarians to Amritsar at the start of this year to assist medical teams during a national immunisation day in India, which has been polio-free since 2014.

He says he personally administered the vaccine to around 80 children. 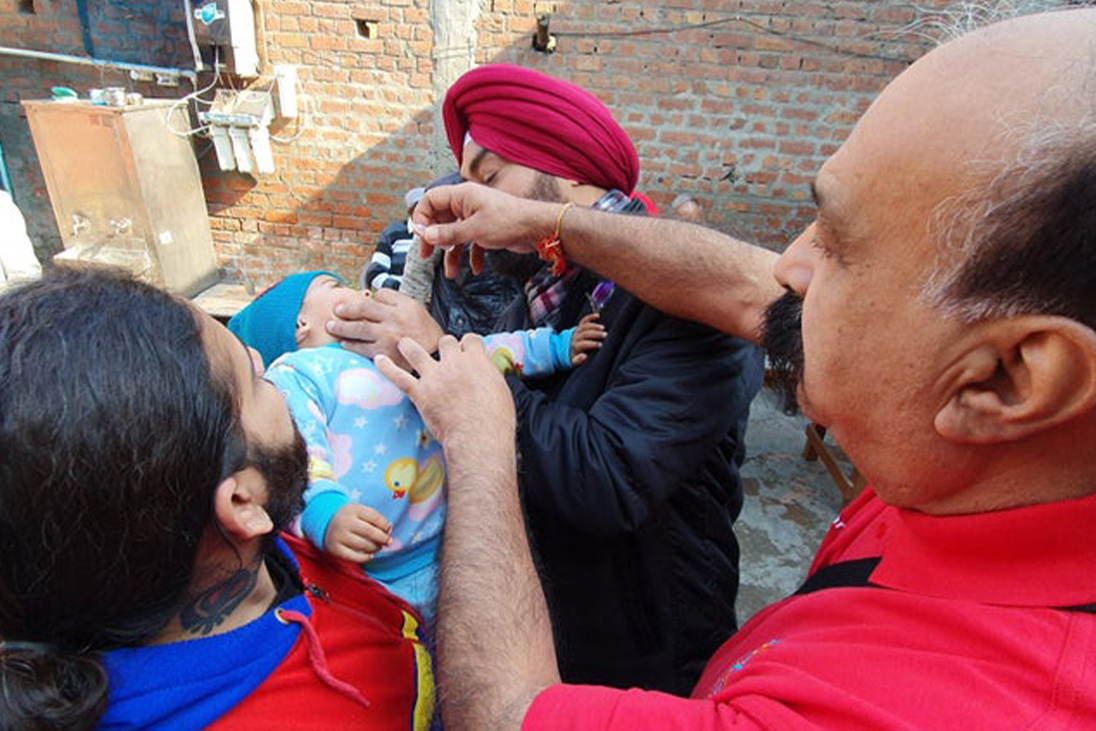 Earlier this year, Joshi led a delegation of British Rotarians to Amritsar at the start of this year to assist medical teams during a national immunisation day in India.

“The feeling I had was of humbleness and of gratitude that I was blessed enough to get the opportunity to help in immunising children and protecting them for life.

“To see the eyes of their parents light up was just amazing.

“Rotarians in the UK raise vast sums of money in the fight to eradicate polio. We went to see for ourselves how that hard-earned money was being used.

“Each one of us went to different places in Amritsar where we helped with the immunisations. They gave so many drops.

“It was amazing to see the difference it makes. It costs about 20p per person and it saves lives – two drops and you have protected a child for life.

“It was a big honour for me to lead the delegation.”

It costs about 20p per person and it saves lives – two drops and you have protected a child for life.”

As part of the efforts, Joshi and the Rotarians took part in a rally with more than 500 local schoolchildren, marching through the streets carrying placards and banners they had made to urge families to bring young children to immunisation stations.

Joshi also went to Pakistan with his wife and daughter to see how their immunisation efforts are going in that country, where the situation has been considerably more fraught.

Last year, a federal government campaign to vaccinate more than 40 million children under five had to be temporarily suspended following a series of fatal attacks on health workers and police officers.

Dozens of polio workers and police officers guarding them have been killed in the country since 2012 by militants, including the Pakistan Taliban, who oppose the vaccinations. 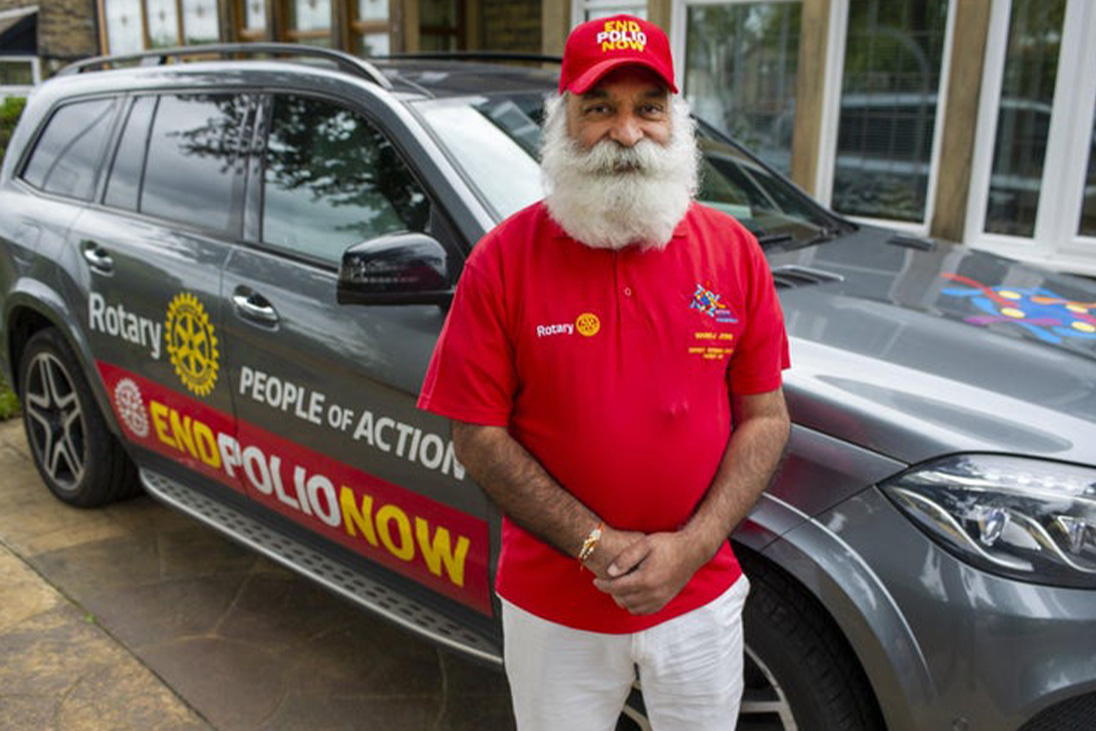 Joshi, a retired pharmacist from Bradford and former district governor of Yorkshire and North Lincolnshire for Rotary International

Joshi says that the situation is improving. “We were able to see with our own eyes the efforts being made to immunise children.

“The adverse publicity about vaccines and some deaths were in the remotest parts of Pakistan where there is very little rule of law and people are not as informed about the consequences of polio.

“There was misinformation about people giving drops to kill the children or make them disabled. The government of Pakistan is totally committed to eradicating polio and I think the battle is being won.”

Joshi, who spent 27 years working for the AstraZeneca pharmaceutical company which is working with the University of Oxford on a potential coronavirus vaccine, says the programme to eradicate polio offers hope that the same can be done with Covid-19 – and in a much shorter timeframe.

“I’m very confident because so many lessons have been learned from previous programmes, especially Ebola, SARS and polio. With Covid, we have learnt from all those things and governments are focused on preventing Covid.

“Pharmaceutical companies are nearing a vaccine and are going to distribute it to everybody who needs it. We obviously need the vaccine as fast as we can and we will soon be back to normal.”

Last year, a federal government campaign to vaccinate more than 40 million children under five had to be temporarily suspended following a series of fatal attacks on health workers and police officers.”

He says that in contrast with the polio situation, the issue of funding vaccination programmes should not be a problem given the determination of governments around the world to stop the virus.

“When we started with polio we didn’t have today’s technology. It is going to be very easy in the developed world to immunise people.

“There is also no issue about funding. Polio vaccination was not available to all – Rotarians raised about £2.6bn.

“With Covid, all the governments are squarely focused on it and pharmaceutical companies will be giving it out at cost.”

In something of a parallel with polio, there have been concerns from some quarters about how safe a future Covid vaccine will be. So what would Joshi say to people with those views?

“I would say that anything that helps prevent diseases is to be welcomed. The choice at the end of the day is on individuals.

“If they don’t want to take it and have the consequences of the disease, it is their choice. But the vast majority of people will choose prevention and will accept a minimal risk because nothing is guaranteed.

“No medicine or vaccine is 100 per cent guaranteed to be side-effect free. But even if you went to cross a road, you have a one in 100 million chance of being hit by a car or bicycle.”

On World Polio Day in October, buildings across Yorkshire are lit up in purple, while in the past purple crocuses have been planted in Manningham Park in Bradford.”

With children who have had the vaccine in countries like India getting their fingernails stained with a purple marker pen to record they have had the treatment, many of the fundraising and awareness efforts Joshi has been involved in centre around the colour purple.

On World Polio Day in October, buildings across Yorkshire are lit up in purple, while in the past purple crocuses have been planted in Manningham Park in Bradford.

Joshi says work has recently taken place with the Bradford-based Regal Foods Plc to create a purple madeira cake that will be sold to help raise money for the campaign.

Every donation to Rotary’s End Polio Now campaign is being trebled by the Bill and Melinda Gates Foundation, which also supports the efforts. 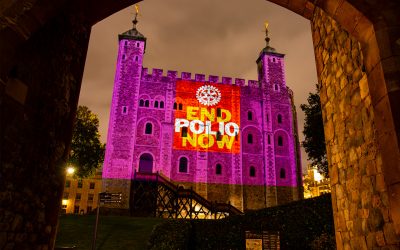