For decades now, Rotary has been on the frontline on a mission to eradicate polio and each year Rotary gets closer to achieving that goal.

Rotary has helped reduce cases of polio by 99.9% since it’s first project to vaccinate children in the Philippines in 1979 and as recently as 2020 Africa was declared polio free.

It’s crucial that everyone continues to play their part in the fight against polio and each year the People of Action Polio Awards is presented by Rotary Great Britain & Ireland to those individuals who have gone the extra mile in that fight towards a polio-free world.

This year’s winner of the award is Dr Peter Tasker, who has relentlessly supported End Polio Now campaign with consistent dedication over a period of eight years. 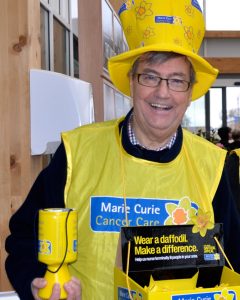 Peter, a retired General Practitioner, has been the main force behind the polio fundraising initiatives at his Rotary club (the Rotary Club of King’s Lynn Priory) and he has raised £3,970 with the assistance of his fellow local Rotarians.

Since 2011, Peter has been receiving treatment for life-threatening leukaemia and despite the draining nature of some of his treatment, he has continued on in his unrelenting support of The Polio Eradication Programme.

In the face of his illness, Peter has been the main driver behind several of his club’s polio fundraising events such as the Purple4Polio drive and manning the information and fundraising stall at The Royal Flower Show at Sandringham.

He also organised a large fundraising dinner which featured a variety of Rotarians actively involved in the fight against polio as well as presentations from polio survivors.

Peter has taken every opportunity to introduce polio-focussed guest speakers to the members of his Rotary club both before and after the pandemic, taking full advantage of the opportunities presented by Zoom.

As a direct result of the initiatives Peter consistently brings forward, ‘Stop Polio Now’ has become an integral part of the mindset of King’s Lynn Priory Rotarians as one of their most worthwhile areas of fundraising and advocacy.