Robotic cats are “life changing” for those living with dementia

Robotic cats are “life changing” for those living with dementia

Dementia can be hugely traumatic for individuals living with the disease, their families and their carers. Now a “life changing” care option is touching the lives of local people thanks to Wakefield Rotary.

Back in August 2018, Rotary member Sheila Wainwright shared the story of her husband John, who died eight years ago after living with early onset dementia.

During John’s seven years of living with the disease, he became increasingly violent, with Sheila receiving little support.

After John died, Sheila, a member of Wakefield Rotary, began to visit groups to share her story. And after discovering the robotic cats at a dementia conference in Yorkshire, she began to share those too.

Sheila, found that, with one of these battery-operated cats on their lap, that meows, purrs and rolls over, those living with dementia were transformed.

They provide calm and company at a time in people’s lives where they may have little of either, but need it most.

Sheila, an ambassador for the Rotarians Easing Problems of Dementia (REPoD) action group, has been campaigning and fundraising ever since, with her own Rotary club being particularly active in helping to support the close to 5,000 people living with dementia in the town.

Not only have you changed the life of these ladies, but you have given our staff a knowledge of the different kind of needs people living with Dementia.”

The impact these cats can make was summed recently up by a letter the club received from a local care home.

“I would like to say a massive thank you for the club’s donation of a robotic cat,” the letter began.

“We have a lady at our care home who is living with dementia. She has, over the past few months become so frustrated, calling out and screaming a lot of the time throughout the day.

We have tried all sorts to help with this as carers, using different activities, stimulation and reassurance. Nothing has worked. And then you brought the cat!

This lady has cuddled, named and loved him. She no longer shouts out and is happy and content. We were amazed at the change and the new life this lady now has.

A family member whose mother has Alzheimer’s witnessed this and bought a cat for her as she showed episodes of anxiety and depression. This has also stopped.

Not only have you changed the life of these ladies, but you have given our staff a knowledge of the different kind of needs people living with Dementia may have. For that we cannot thank you enough.”

There are over 850,000 people currently living with dementia, and scientists are aiming to bring about the first life-changing treatment by 2025.

Over the last year, Wakefield Rotary Club has donated over 60 robotic cats in their local area, providing calming relief from stress, anxiety and frustration to dozens of people living with the disease.

The club has an arrangement with manufacturers in the USA to obtain further supplies at reasonable cost. Rotary clubs interested in purchasing robotic cats, or finding out more about the project, can contact Wakefield Rotary Club via their website.

Make a difference in your community. 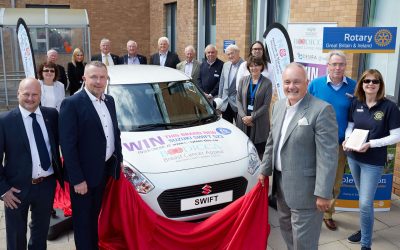 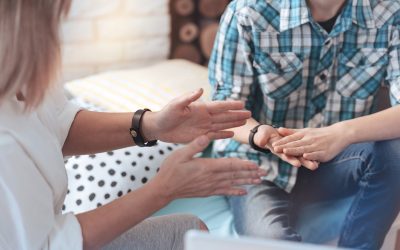 One in six adults experience at least one diagnosable mental health problem in their lifetime. Rotary has committed to promoting good mental health and wellbeing in our local communities through Public Health England. 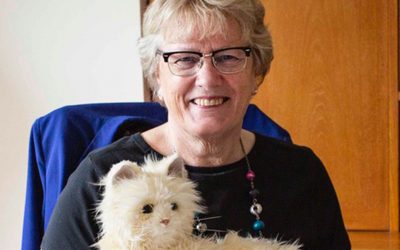 Sheila Wainwright from Wakefield Rotary Club has been at the forefront of a campaign to promote the gift of robotic cats to dementia sufferers. Now this initiative has received a major boost from Britain’s best-selling cat magazine.