October 24th marked one of the most important days in Rotary’s calendar; World Polio Day.

In aid of this event, Rotary clubs globally hosted a variety of events varying from lighting buildings, memorials and parks purple, to planting crocus corms and even hosting cupcake sales and cycle events.

Rotary has been at the forefront of the End Polio Now campaign for over 30 years.

In this time Rotary and its partners have protected almost 3 billion children with the vaccine, which has prevented 19 million children from being paralysed.

Cases of wild poliovirus have fallen by 99.9% with only two cases present in the world so far in 2021, one each in Afghanistan and Pakistan.

But what is Polio?

Poliomyelitis, also known as polio is a paralysing and potentially deadly infectious disease. The virus spreads from person to person, typically through contaminated water.

With no found cure, polio can only be prevented with a simple and effective vaccine which is given to children through drops in the mouth.

Once a child is vaccinated they typically have their pinkie finger painted in purple. This is why purple is associated with polio.

One of the activities taking place on World Polio Day was lighting up the Tower of London in purple.

Rotary in Great Britain and Ireland’s Purple4Polio Ambassador, Paralympian and polio, survivor Anne Wafula Strike MBE joined about 30 Rotarians to watch the illumination of the Tower.

Anne said: “I think it is very important that Rotary continues pushing this campaign to eradicate polio because we are almost there.

Below you can see some of the different ways that clubs and places have celebrated this special day.

The Tower of London could be seen from a distance away, shining in a purple hue with the ‘End Polio Now’ logo reminding the city of the Rotary campaign. 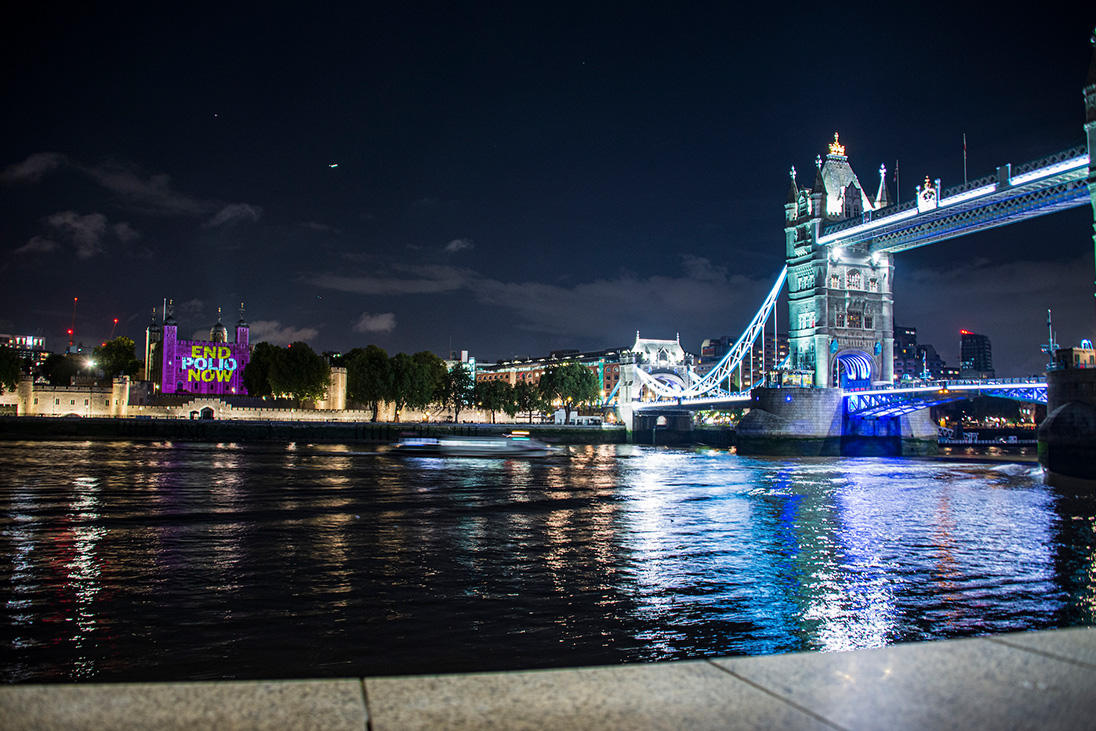 View over the River Thames of The Tower of London.

Many thanks @CllrRDaniels for painting #Chester purple for #WorldPolioDay – your effort is much appreciated. #DYK polio could be the 2nd human disease to ever be eradicated? Help @Rotary #endpolio forever. https://t.co/xQ0q9AZLb2 pic.twitter.com/2ahCPDwIS3

St Mary’s is PURPLE for World Polio Day
Please support ushttps://t.co/uEGtasE4mc
Your donation will really help and we are almost there. Want to know more see us in the Market Place on Sunday and back at the church Sunday evening pic.twitter.com/KeT7rsxtt0

Salisbury Rotary illuminated the Salisbury Arts Centre as well as arranging the theatre, Salisbury Playhouse to be lit. The club is also planting 4,000 crocus bulbs as part of the work for the campaign. 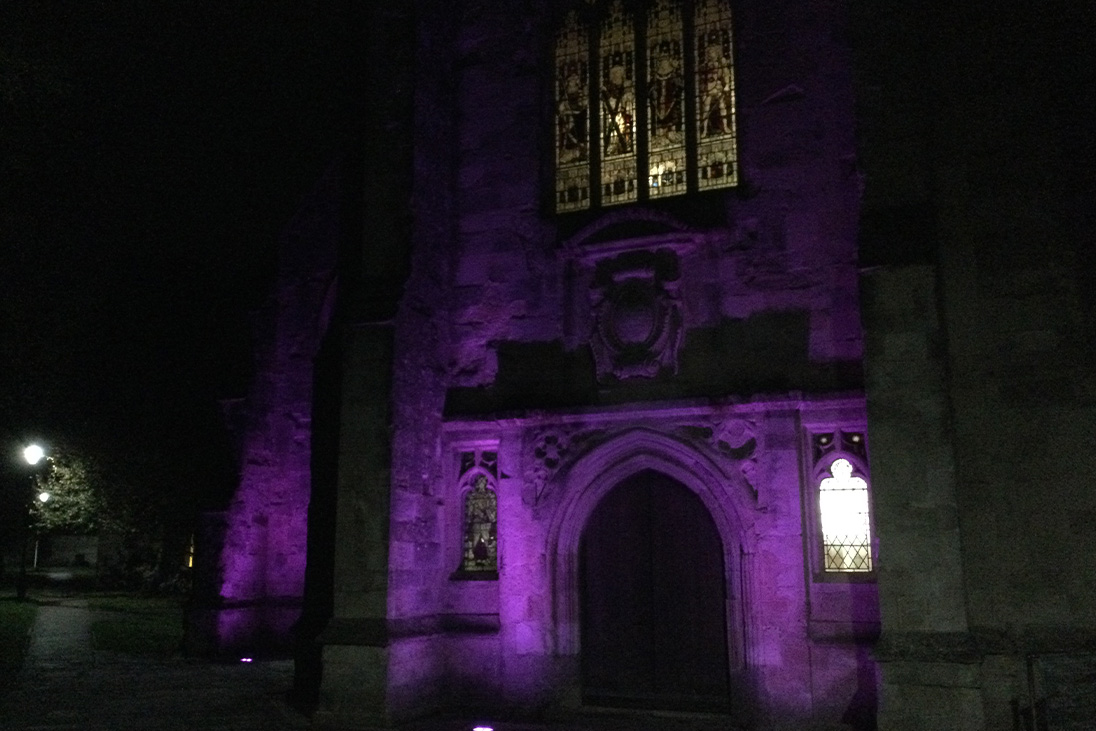 Peterborough Ortons Rotary have illuminated Peterborough Cathedral in purple. As well as 1500 Crocus bulbs have been planted on the Cathedrals grounds in hopes that this will bring more recognition and members joining Rotary. 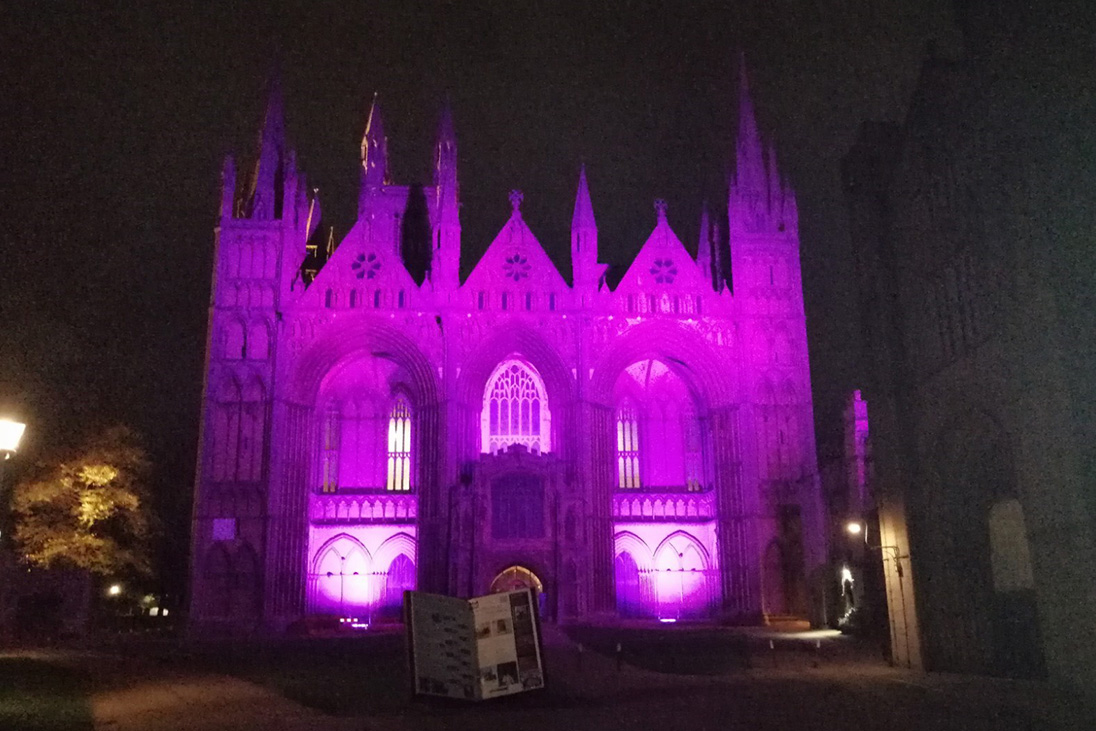 The Peterborough Cathedral lit up.

💜Proud to be supporting @Rotary1180 in their campaign to eradicate polio worldwide by lighting our main building in #purple4polio all week. #EndPolio #WorldPolioDay

Click the link to find out more about the campaign: https://t.co/ElwKN5voLO pic.twitter.com/wUx7LoUk3Y

Crocuses were chosen as the emblem as the purple colour matches the colour of the dye painted on children’s hands after they had been immunised.

Below are posts from some Rotary clubs that have decided to plant crocuses in their local areas in celebration of World Polio Day.

1/2 Today is World Polio Day, each year to mark the day I team up with Bilston’s @RotaryGBI Club & a local school. We spent Fri morning planting 2000 crocuses at a school. Rotary clubs worldwide help to plant millions of purple crocuses every year to raise awareness to end polio pic.twitter.com/PRMQnYsIlw

To celebrate #WorldPolioDay2021 a team of enthusiastic volunteers consisting of 10 #TonbridgeRotarians and 4 #FriendsofRotary turned up on Sunday morning to plant 4,000 crocus corms on a section of the verge opposite #TonbridgeSchool @TonbridgeUK. #EndPolioNow pic.twitter.com/2XC5zXRa8k

Some Rotary clubs have decided to take their own spin on the campaign. This included fundraisers, baking and even walking a mile to fund more vaccines and opportunities for polio eradication.

Below are some of the more creative takes of World Polio Day.

Happy #WorldPolioDay @RotaryGBI @Rotary1150 @Rotary and every Rotarian across the world. We were proud to share the efforts of #Rotary in eradicating #polio with those attending the #Knighton community market yesterday. Hope you all have a great day! pic.twitter.com/gQodvlUXgo

We said we had some exciting plans for #worldPolioDay2021! We already lit St Dunstan’s, now we launch our FREE purple themed e-recipe book! Later than planned – but it’s still WPD in some countries! Download: https://t.co/ONxFfyj2mf @RotaryGBI @RotarySE1120 @rotarycanterbu1 💜 pic.twitter.com/lbl9ecIQjY

If your club has taken part in World Polio Day no matter how big or small, we would love to hear it. Send the details of the event to pr@rotarygbi.org. 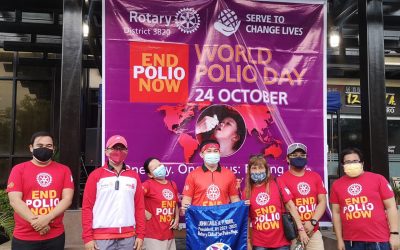 How Rotary around the globe celebrated World Polio Day 2021

As we reached World Polio Day on October the 24th, Rotary and their partners came together across the world to support the End Polio Now campaign.