The man who guided Nigeria to becoming polio-free – an achievement announced by the World Health Organisation a month ago – has been recognised as one of Time magazine’s 100 most influential people across the globe.

TIME announced its 2020 honourees during a September 22nd television broadcast on the American network ABC, recognizing Funsho for his instrumental leadership and work with Rotary members and partners to achieve the eradication of wild polio in the African region. 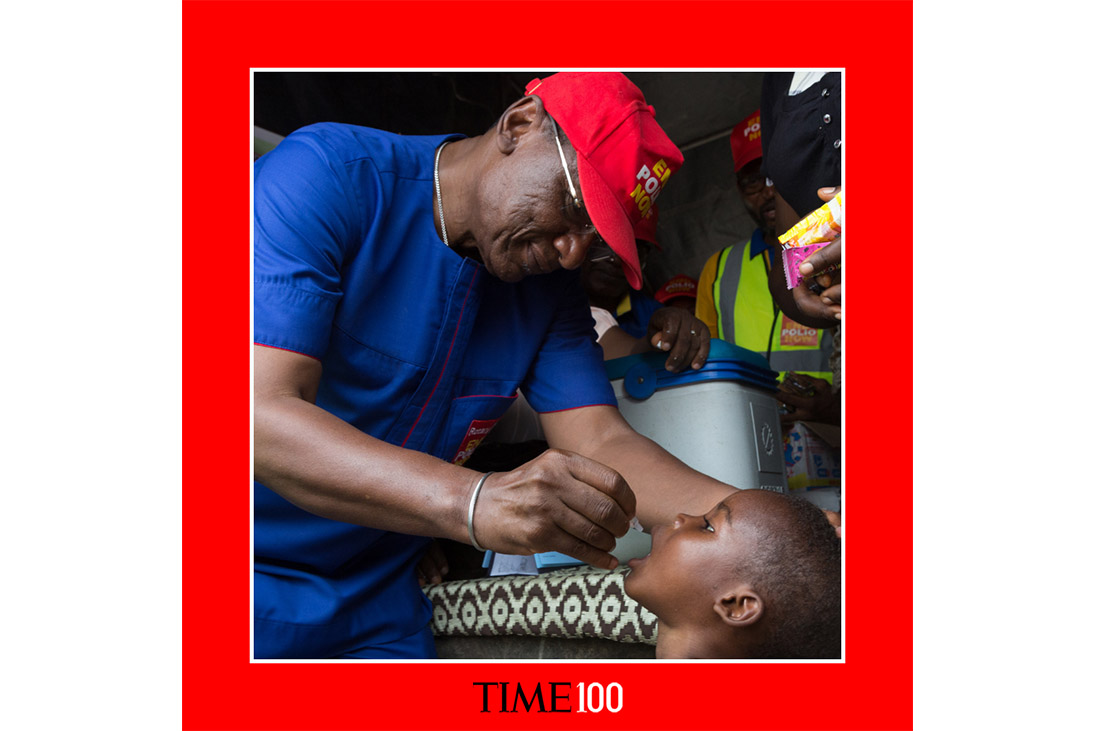 He is the first Rotary member to receive this honour for work toward eradicating polio.

A Rotarian for 35 years, Dr Funsho is a member of the Rotary Club of Lekki, Nigeria, past governor of District 9110, and serves on Rotary’s International PolioPlus Committee.

Dr Funsho is a cardiologist and a fellow of the Royal College of Physicians of London. He lives in Lagos, Nigeria with his wife Aisha. They have four children; Habeeb, Kike, Abdullahi and Fatima; and five grandchildren.

TIME 100 comprises individuals whose leadership, talent, discoveries, and philanthropy have made a difference in the world. Past honourees include Bono, the Dalai Lama, Bill Gates, Nelson Mandela, Angela Merkel, Oprah Winfrey, and Malala Yousafzai.

TIME 100 comprises individuals whose leadership, talent, discoveries, and philanthropy have made a difference in the world.”

“I’m honoured to be recognized by TIME for my part in ensuring that no child in Africa will ever again be paralyzed by wild polio, a disease that once disabled 75,000 African children every single year,” said Dr Funsho.

“Eradicating the wild poliovirus in Africa was a team effort that required cooperation and dedication of governments, partners, Rotary members, hundreds of thousands of health workers, and countless parents who chose to have their children vaccinated against polio.”

Rotary member Dr. Tunji Funsho named one of TIME’s 100 Most Influential People in the World. https://t.co/rjzzO6hC4q#TIME100

As the chair of Rotary’s Nigeria National PolioPlus Committee, since 2013 Funsho has led PolioPlus efforts in the country, building upon the work of his predecessors.

Dr Funsho has worked alongside Rotarians in Nigeria to raise awareness about the importance of polio immunization, encouraged governments and public figures to support polio eradication, and served as a vocal leader and advocate for Rotary and its fight to end polio.

He works closely with the Global Polio Eradication Initiative partner organizations: the World Health Organization (WHO), UNICEF, the U.S. Centers for Disease Control and Prevention, the Bill & Melinda Gates Foundation, and Gavi, the Vaccine Alliance.

As a member of Nigeria’s Presidential Task Force on Polio, he has co-ordinated immunizations and advocacy campaigns with the Minister of State for Health and the Inter-Agency Coordination Committee for Polio Eradication.

Dr Funho has also worked closely with the Sir Emeka Offor Foundation, the Dangote Foundation, the Traditional Leaders Council and the Federation of Muslim Women’s Association of Nigeria.

In August 2019, Nigeria reached three years without a case of wild poliovirus.

Nigeria’s progress, led by Rotary, its partners and local and national governments, was the result of decades of sustained efforts, including domestic and international financing, the commitment of hundreds of thousands of health workers, and innovative strategies to immunize children who previously couldn’t be reached due to insecurity in the country’s northern states.

As the chair of Rotary’s Nigeria National PolioPlus Committee, since 2013 Funsho has led PolioPlus efforts in the country, building upon the work of his predecessors.”

On August 25th, the African region was certified wild polio-free. This historic announcement means that five of the WHO’s six regions, representing more than 90 percent of the world’s population, are now free of the wild poliovirus. The virus is still endemic in Afghanistan and Pakistan.

With Africa’s milestone, Rotary and its partners took a major step forward toward their goal of global eradication.

Dr Funsho told TIME magazine of the achievement: “The polio eradication program in Nigeria has gone through some difficult times, but I never once doubted that this day would come.

“Any time that we’ve experienced a setback, Rotary and our partners have been able to find solutions and develop strategies for reaching vulnerable children.”

On Aug. 25, 2020, Nigeria was declared polio-free, clearing the virus from its last redoubt in all of Africa. "The person who did more than any other to drive polio to continent-wide extinction was Dr. Tunji Funsho," writes @jeffreykluger #TIME100 https://t.co/iasKGPGTjZ

He added: “One thing I know for certain, is if Nigeria could eliminate the wild poliovirus, any country can eliminate it.”

He said: “This achievement would not have been possible without the countless Rotarians in Africa and around the world who have worked tirelessly to eradicate polio, one country at a time.

“Nor would this achievement be possible without the Rotary International staff who have helped provide critical support to Rotary members as we work towards a polio-free world.”

Never has drinking gin been more fun and profitable to charity, as the Passionately Purple gin continues to raise funds for End Polio Now.