Government Minister Penny Mordaunt has saluted the work of Rotary’s immunisation programme in India over the past decade.

Over 16 million Indian children have been directly vaccinated as part of the Rotary-supported initiative which enabled India to be declared polio-free in 2014.

Hundreds of Rotarians from Great Britain & Ireland have participated annually in the polio immunisation teams, who have gone door-to-door in cities and remote villages with the life-saving vaccine.

All of the volunteers have funded their own airfares and rolled up their sleeves to help at the hundreds of vaccination booths set up by Indian Rotarians and health agencies.

And International Development Secretary, Penny Mordaunt MP, pictured above, praised Rotarians for their “selfless and dedicated” work during a House of Commons reception to mark a decade of the ground-breaking initiative.

Reflecting on how close the world was to becoming polio-free, with just 37 cases recorded in three countries in 2017, she said: “Rotary’s role in eradicating polio will deliver one of the greatest public health victories of all time.”

Rotary’s role in eradicating polio will deliver one of the greatest public health victories of all time.”

She added: “It’s really hard to overstate the importance of the achievement of India becoming polio-free. It was an historic milestone in the road to global eradication.

“India’s success was the result of a multi-dimensional eradication strategy, backed up by a huge amount of hard work by people on the ground.

“This has demonstrated to the world that even in the most challenging environments, polio can be defeated through a concerted and co-ordinated campaign.

“The dream of making India polio-free would not have been realised without massive social mobilisation and the remarkable, selfless work of volunteers from Rotary.

“Your contribution has been extraordinary. You have been diligent, determined and dedicated to achieving and maintaining eradication over the last 10 years.

“And you have been fantastic ambassadors for the UK, working hard to achieve a fantastic result.

“Your contribution and the contribution of over 1,500 volunteers has helped immunise over 16 million children in India, which has enabled every single last child to be reached and none left behind to face this cruel disease.

“We are immensely proud of all of you and we are committed to eradicating polio for good.”

The Westminster reception, which was attended by more than 200 Rotary volunteers, was hosted by William Wragg MP, who is a member of Hazel Grove Rotary Club of near Manchester.

He pointed out that 30 years ago there were 350,000 cases of polio in 125 countries. “There has been reduced to 99% with Afghanistan, Pakistan and Nigeria the last remaining outposts of polio.

“UNICEF, the World Health Organisation and even the Prime Minister of India have all stated that it would not have been possible for the country to be polio-free without the work of Rotary,” he said.

William Wragg took time to single out the leadership of his constituent, Mike Yates, from the Rotary Club of New Mills & Marple, who has spearheaded the volunteer visits and has made 20 trips to India himself with wife Bernice.

The British government has poured £1.3 billion to help wipe out polio since 1988. And with the end in sight, the Minister urged that the expertise and resources used in the battle against polio should eventually be deployed to tackle a wider range of diseases.

The man who guided Nigeria to becoming polio-free – an achievement announced by the World Health Organisation a month ago – has been recognised as one of Time magazine’s 100 most influential people across the globe. 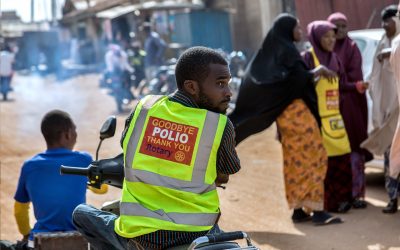 The man who guided Nigeria to becoming polio-free – an achievement announced...
Polio

The man who guided Nigeria to becoming polio-free – an achievement announced...
Polio