Mark Tredwin is the owner of the Team Treddie motor racing outfit. It may not have been the best of racing summers for the racer, who has been hurtling round tracks in a purple-liveried Caterham 7 car – but he has been raising the profile of Rotary’s Purple4Polio campaign.

It’s not been the best of seasons for the Dorset-based racer, who has become an ambassador for Rotary’s Purple4Polio campaign.

“I’m absolutely committed to the Purple4Polio campaign, as it has now become something of a passion of mine,” admitted Mark, a former Rotarian and whose parents were heavily involved with both Rotary and Inner Wheel.

“Everyone in the pit lane has got used to me going on about Purple4Polio and have fully embraced it.”

I have a passion to tell the story and I have received great support from the drivers and those attending the races. Everyone now knows about Purple4Polio.”

Mark admitted that since he got involved with the Rotary-inspired initiative a couple of years ago, motor racers across the country have become fully aware of the polio story.

“I think the Purple4Polio campaign has really struck a chord with the drivers,” added Mark.

“I have a passion to tell the story and I have received great support from the drivers and those attending the races. Everyone now knows about Purple4Polio.”

Besides raising awareness, the motor racers have also helped to raise some cash for the campaign. A couple of the drivers have pledged £1 per race point during the series.

Mark is looking forward towards the big finale of the season with a six-hour endurance race at Silverstone on the full Grand Prix circuit. 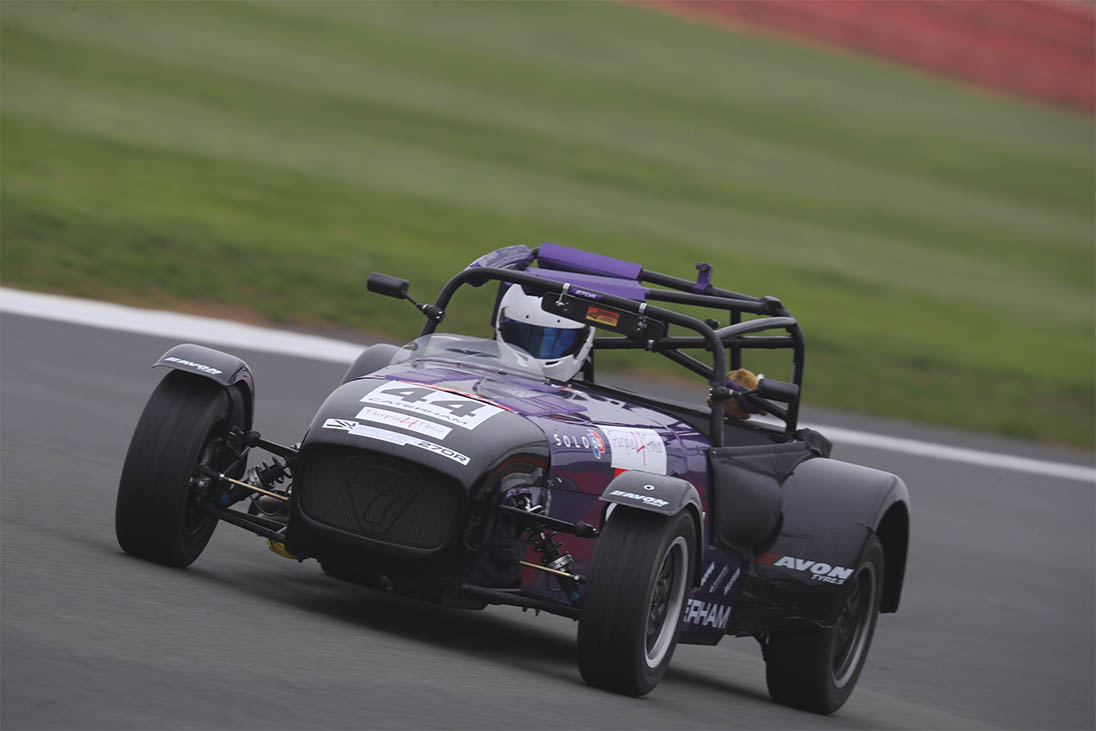 Last year, he was only able to watch from the pit lane while managing a team because his own vehicle was out of action. But on October 26th, he will have his Purple4Polio backed team vying with 70 other racers competing at this prestigious competition.

Up to five teams will be displaying their ‘Racing for Purple4Polio’ stickers on their vehicles and Mark is organising his own competition for Purple4Polio at the event by presenting Purple Rotary Polio bears to each driver in the winning team.

Known as the Birkett, this will be the 67th running of the endurance event with teams of four to six drivers battling it out for both outright and handicapped honours over the six-hour race.

Twelve months ago, more than 350 cars took part, and with big crowds expected, this will ensure great awareness for the Rotary-inspired polio campaign.

Each team has to lap the circuit as many times as they can within the six hours, with only one of their team cars running at any one time. As one comes into the pit lane, the next can be dispatched out onto the circuit.

Entry is restricted to sports and saloon cars. This means an eclectic mix of vehicles can be on track, everything from 1960’s MG Midgets to BMW M3s, hordes of Caterham derivatives and modern sports racing cars such as Radicals.

“I am really looking forward to the race,” added Mark. “It’s a great day, and a lot of fun too. I’m hoping to raise plenty of awareness for Purple4Polio.”

Since 1985, Rotary’s key humanitarian priority has been to rid the world of polio.