She is a 77-year-old Australian grandmother with the energy and dynamism of a woman a third of her age, and Susanne Rea shows no signs of stopping.

A survivor of polio as a child, Susanne is a restless soul with a drive to do just as it says on the tin – End Polio Now!

Susanne has flown over to London for the month to spend time with her family here, while husband Nauman is back home in Cairns. She plans to fly to Pakistan next month.

She was last there in December 2017, when Susanne and Nauman travelled to a small rural school close to the capital Islamabad as part of a polio immunisation visit.

“We were guests of Past President Nosherwan Khalil Khan and the Rotary Club of Rawalpindi, and we met at the corner of the GT Road at Rawat,” she recalled.

“The countryside is rural and peaceful with the occasional dwelling and mosque, until we came to a sprawling complex entered through a metal gate which revealed a school for 200 students.

“This was the former home of the head teacher, which now contains a collection of classrooms. It was mid-winter, and the children were sitting on the floor. Even some of the classes were held in the open air, with the children and teachers rugged up against the elements. One rather basic washroom services the complex.” 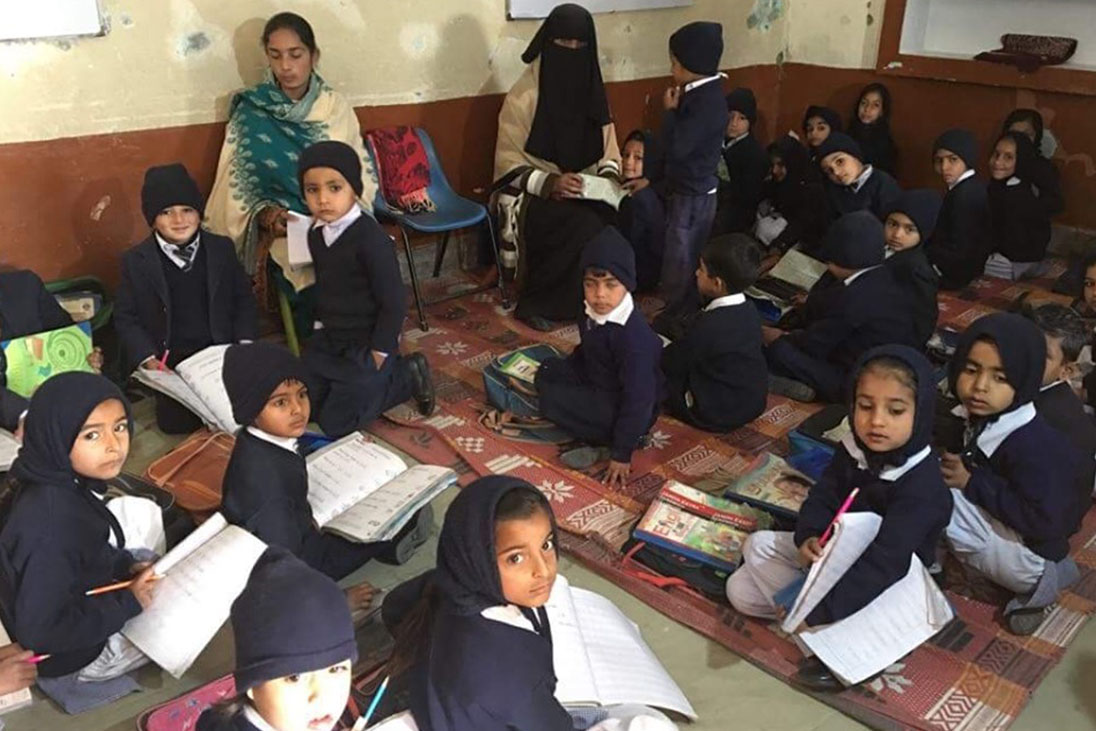 A survivor of polio as a child, Susanne is a restless soul with a drive to do just as it says on the tin – End Polio Now!

While giving polio drops at the school, along with Rawalpindi Rotarians and a World Health Organization Worker, Nauman and Susanne resolved to help the school.

With help from generous friends in Australia, they raised enough money to equip the rural school with furniture and books.

“Now we want to build a new school, or at least six extra classrooms and toilet blocks so the children are not exposed to the elements and their educational horizons are expanded,” she added.

While in the UK, Susanne is taking the opportunity to promote the ‘World’s Greatest Meal’ concept which was born six years ago while she was polio chair of Rotary District 9550 in Queensland, living a quiet retirement of reading books and gardening.

Joining forces with Mukesh Malhotra from Hounslow Rotary in London, Susanne’s motivation was to make an impact during her retirement.

That she has achieved by raising a total of $11 million for End Polio Now by simply inviting friends, groups and organisations, big and small, to hold a fund-raising meal.

It is a project which has changed her life completely.

She said: “It is my personal life challenge to assist with the funding of the end game of polio. To help achieve this, I have lived in the United Arab Emirates, Uganda and Pakistan, and have travelled to 47 countries for fund-raising.” 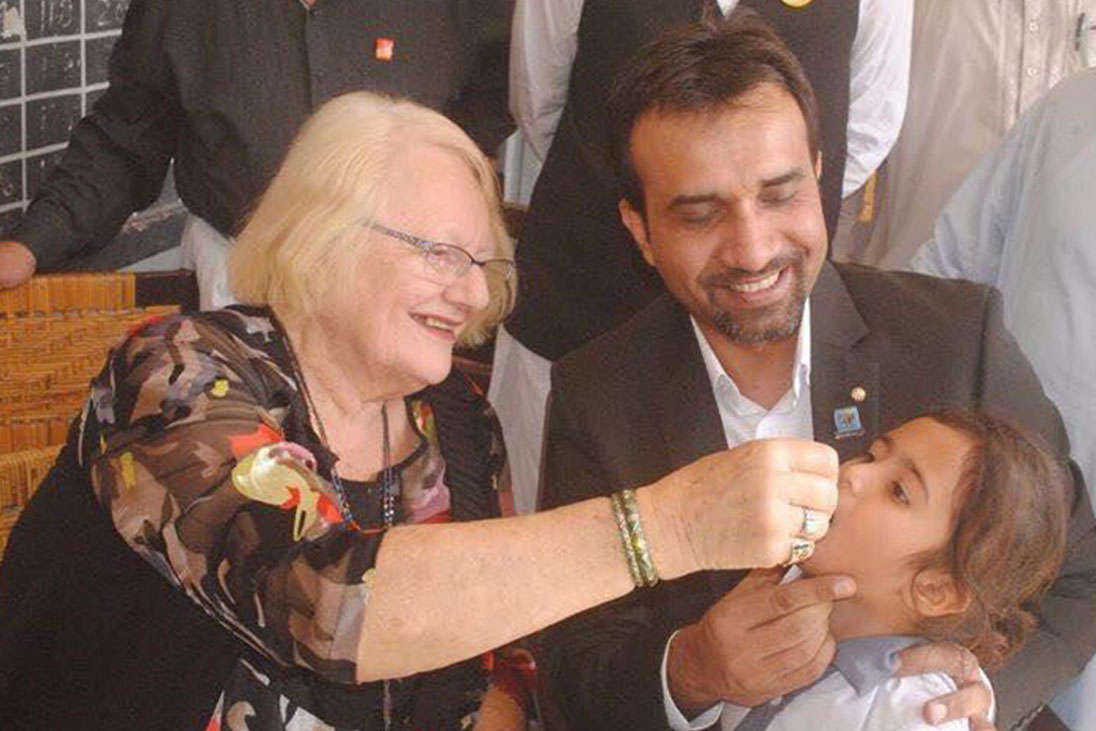 Susanne has raised a total of $11 million for End Polio Now by simply inviting friends, groups and organisations, big and small, to hold a fund-raising meal.

Susanne has gone to extreme lengths and put herself in danger to promote the polio message. In Pakistan, she travelled in disguise to speak to seven Rotary clubs in the basement of a boys’ school in Peshawar.

“I have been down back alleys and into market places and bus stations seeing the reality of life,” she reflected. “The poverty, the bad drainage, the malnutrition, the migration.

“I have seen the pure efforts of Rotarians on a personal basis, and those polio-affected people who travel to villages to beg parents to vaccinate their children, and not let them risk being paralysed.”

What cannot be denied is that after nearly 6,000 World Greatest Meal events in 82 countries, the $11 million raised – supported by the Bill & Melinda Gates Foundation – has enabled for 18 million polio vaccines to be bought.

Anyone can be a part of the fight to #EndPolio and have their donation to @Rotary matched 2-to-1 by the @gatesfoundation Donate today: https://t.co/VPqkNR7wVq

However, the big question Susanne is constantly asked is when will polio be finally eradicated. Just two countries remain affected by polio – Pakistan and Afghanistan – with Nigeria soon to be certified polio-free.

Susanne’s view is a pragmatic one. It’s not going to be solved as quickly as some might like to think – but it will one day.

She explained: “To eradicate polio was never going to be easy. For example, when I was in Uganda, I found that vaccines could not be delivered because fuel had been stolen from the vaccinator’s motorbike.

“In Zambia, they are faced with an influx of refugees which presents a problem with vaccine supply and a real shortage of injectable vaccine.

“I can choose where I go as a Rotarian. I am not a Rotary officer, so I have great freedom to go to the more challenging places around the world. 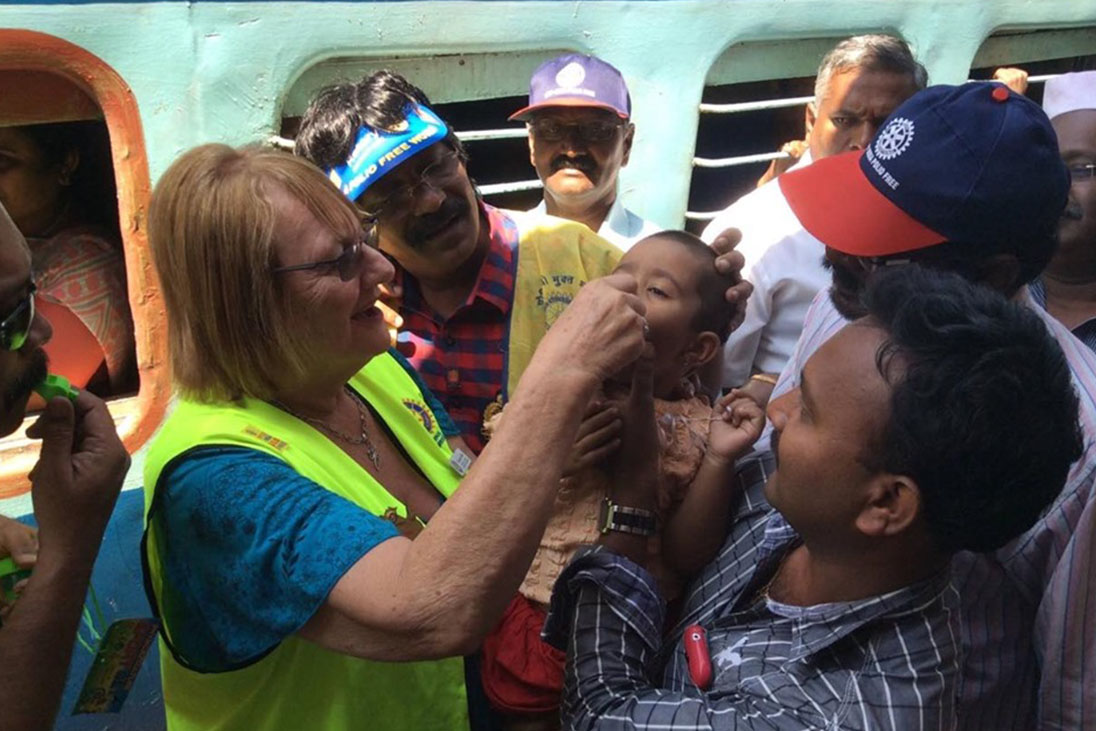 Susanne explained: “To eradicate polio was never going to be easy. For example, when I was in Uganda, I found that vaccines could not be delivered because fuel had been stolen from the vaccinator’s motorbike.

“When people say ‘we are this close to eradicating polio’, my question is are we ‘this close’? How can we know what is truly happening in Afghanistan.

“Regardless of the immense gains, the war is not won. We must persevere or it will mean thousands of paralysed children. Can we live with that as humans and Rotarians?

“I know that whilst I have breath, I will do what I can to help end polio, and that is why the World’s Greatest Meal to help End Polio Now has a place as a fund-raiser.

“It is simple because it is fun and because, as Rotarians, we owe it to the children of the world not to give up now when the hard yards have essentially be done over the past 30 years.

“I would urge Rotarians to continue to advocate, raise awareness, immunise, and fund-raise until we can truly say we are successful, and children everywhere do not have this polio virus waiting to strike the unsuspecting pool, malnourished, migrant, unvaccinated child to maim, or even kill.”

Susanne joined Rotary in 1994, then the only female in her club. She’s worked on projects to stop the trafficking of children as sex slaves and drug runners in Thailand, raised $130,000 to build homes close to a school to educate hill tribe children, and now the biggest project of all is to provide the funding and momentum towards finally getting rid of polio.

The Rotary-led Passionately Purple Gin project, with is raising money for polio has received endorsement from celebrity, Sian Lloyd.