Wolverhampton and Guildford Rotary clubs are celebrating their centenaries and joined forces to support the Rotary Jaipur Limb Project.

The year 1984 was a momentous one for the tens of thousands of disabled men women and children whose lives would be touched following a visit to Jaipur in India by a group of Rotarians.

They were visiting pioneering limb-making workshops in the capital of Rajasthan. The Rotarians saw how no disabled person was turned away. Many patients came from great distances by any method of transport, and all were treated free of charge.

So, the Rotary Jaipur Limb Project was born.

The limbs, together with the unique Jaipur foot, are extremely basic. They are simple to manufacture using a plastic tube that is heated in an oven to form the exact moulded shape of someone’s amputated limb.

The moulds are created by wrapping the end of their existing amputated limb in plaster of Paris, which is then used as the mould to form the new limb.

This remarkable project represents a move into future technology enabling many more amputees to be treated allowing them to regain employment, and we are proud to be marking our centenary in this unique way.”

The project has grown to have several permanent centres across India and Africa. Additionally, outreach mega limb camps are run when more than 500 people receive the limbs over the course of a week.

The limbs cost around £35 each, the funds being provided by donations from Rotarians across the world.

Now, in an exciting and innovative new project, the City of Wolverhampton Rotary club has decided to mark its centenary by taking part in a global grant application to instal a 3D printing machine in its Jaipur Limb Centre in Bangalore. These will produce limbs more rapidly and at a fraction of the cost.

The Midlands club has worked in partnership with Bangalore Sadashavanigar Rotary in India, and Guildford Rotary from Surrey, who took the lead as the international partner for the grant.

Both English Rotary clubs have made monetary donations towards the project, alongside an extremely generous contribution from the Jaipur Limb Trustees committee in the UK.

However, a major share of the cost has been provided by The Rotary Foundation, the international funding arm of Rotary.

With 3D printing, the material is joined or solidified under computer control to produce a three-dimensional object, with the material being added together layer by layer.

Very complex shapes can be produced, such as artificial limbs, by using a scanner over the amputee’s existing limb end to programme the computer.

President of the City of Wolverhampton Rotary, Richard Green, said: “This remarkable project represents a move into future technology enabling many more amputees to be treated allowing them to regain employment, and we are proud to be marking our centenary in this unique way.”

Guildford Rotary’s Foundation Officer, Andrew Jackson, added “Our member, Past District Governor, Clive Addis-Jones, was for many years a trustee of the Rotary Jaipur Limb Project and facilitated the Guildford Club contribution.

“We are very pleased to be able to support the City of Wolverhampton in their project by running the Global Grant as the international partner for this innovative piece of equipment and the limbs it will be able to provide.” 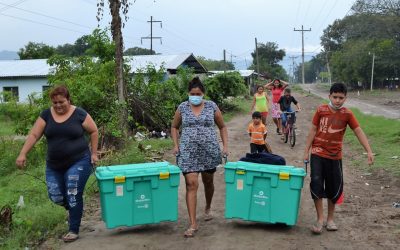 The head of Rotary’s official project partner in disaster relief, ShelterBox, has been sleeping in a tent overnight at the Border Union Show, to help shine a light on how changing climate is driving displacement around the world. 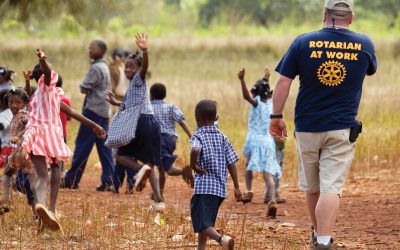 Rotary International’s recent member survey reveals where Rotary is today while suggesting where it needs to go tomorrow. 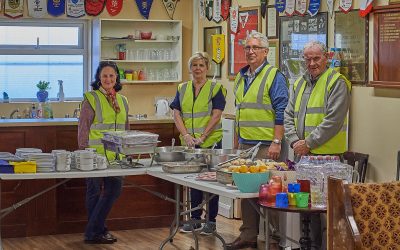 Rotary in Ireland offers a new start to Ukrainian refugees

An Irish Rotary Club has been helping and supporting Ukrainians fleeing their country in starting a new life in safety.