Rotary International President, Shekhar Mehta, sounded an optimistic note when he spoke at an End Polio Now event at the Palace of Westminster.

Shekhar has been in London this week to attend several Commonwealth Day events, including the annual celebration of Commonwealth Nations at Westminster Abbey.

He heads off to Venice later this week to host the first Presidential Conference of the Rotary year, with a focus on economy and the environment.

In order to achieve the path to zero with polio, we must have access to every single child and every single part of Afghanistan.”

In the Churchill Room overlooking the River Thames, the RI President pointed out that Rotary’s work to fight polio globally was saving 19 million lives.

And he explained that since Rotary forged a lead in the campaign 40 years ago, where once 350,000 children were affected with polio, now there had been five in the last year in just two countries.

“It has been a marathon,” he said. “A marathon is run over 42 kilometres, our marathon has been over 40 years. But as with most marathons, the last few miles are the most difficult. When you enter the stadium and everyone is cheering for you, those are still the tough times.

“So we still have a job to do. We have to collect funds, we have to ensure every child is immunised, and I believe we will be able to do that.” 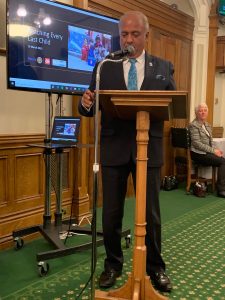 Shekhar also reflected on the deaths of eight vaccinators in Afghanistan last month, killed in four separate attacks in Takhar province in the far north of the country, and in neighbouring Kunduz province. All were engaged in house-to-house visits.

These are the latest deaths in a spate of killings which have dogged vaccinations efforts in recent years.

Polio teams were targeted by insurgent groups in Afghanistan until the Taliban’s takeover last summer, when they said they wanted to work with the United Nations and the World Health Organisation to stamp out the disease.

Shekhar Mehta described these latest deaths as “unthinkable”, adding: “What these deaths won’t do is deter us.”

Aidan O’Leary, the World Heath Organisation’s Polio Director, said that work with the Taliban on a polio eradication programme in Afghanistan had gone well.

“Last year, two-third of the country was inaccessible to vaccinators, but we have now started the first nationwide vaccination campaign in three-and-a-half years. Between November and January, 2.6 million children have been reached and this is a major step forward.”

However, Aidan acknowledged there were still some areas in Afghanistan which were inaccessible through what he described as ‘a mosque-to-mosque mentality’.

“In order to achieve the path to zero with polio, we must have access to every single child and every single part of Afghanistan.” 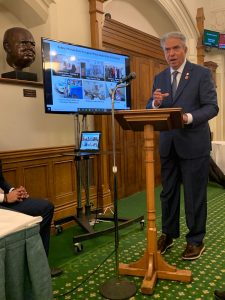 Rotary Foundation Trustee Aziz Memon, chair of Pakistan’s National Polio Committee,  spoke of his pride that there has not been a single case of wild polio virus for 14 months. He praised the support of Prime Minister, Imran Khan, who had been part of the polio task force meetings.

And although Pakistan and Afghanistan have been working together to synchronise efforts, there still remained challenges for vaccinators in some of the border regions. There was some community resistance, and even boycotts.

Aidan O’Leary spoke about the return of polio to Africa with an outbreak last month in Malawi. A case was detected in a young child in the capital Lilongwe, and this is the first case of wild polio virus in Africa in more than five years.

Africa was declared free of indigenous wild polio in August 2020. The WHO chief explained that the strain detected in Malawi was linked to one that had been circulating in Sindh Province in Pakistan.

As an imported case from Pakistan, this detection does not affect the African region’s wild polio virus-free certification status. However urgent measures were being taken with vaccination programmes in Malawi, as well as the neighbouring countries of Mozambique, Tanzania and Zimbabwe.