The Get Moving to End Polio 1240 Challenge is a fresh initiative aimed at raising funds towards the global bid to eradicate polio. Two motoring Rotarians took on the challenge with an inspiring task.

A pair of Cumbrian Rotarians took part in a unique motoring challenge in aid of the Get Moving to End Polio 1240 Challenge with a 1240km drive from northern England to Essex.

Get Moving to End Polio is a new fundraising activity to support Rotary’s Purple4Polio campaign to end polio now and forever.

The border between the last two polio-endemic countries, Pakistan and Afghanistan, is ‘more than 1,240 miles’, so organisers are challenging Rotarians to incorporate the number 1240 while raising funds to eradicate polio.

Seeking to support this initiative two Eden Valley Rotarians Roger Frank of the Upper Eden Club and John Taylor of the Appleby Club challenged themselves to a 1240km road run to arrive at 12:40 at the Grays Thurrock Club in District 1240, donating £1240 to the Rotary Get Moving to End Polio 1240 Challenge.

When the Get Moving to End Polio 1240 Challenge was first announced, it was too good an opportunity to miss.”

Driving a beautiful Bugatti, the dynamic duo left Appleby on a bleak day to head south across the Pennines.

Along the way on the three-day trip, Roger and John stopped off at Scunthorpe Pentagon Rotary, where they received a donation towards their fundraiser, and they also attended Saffron Walden Rotary’s Trafalgar Night in Essex.

The pair finally arrived at Grays Thurrock at 12.40pm on World Polio Day where they were met by Rotary club President, Elaine Stevens. After giving a presentation on their initiative to the Rotarians, they were presented with another donation towards End Polio Now. 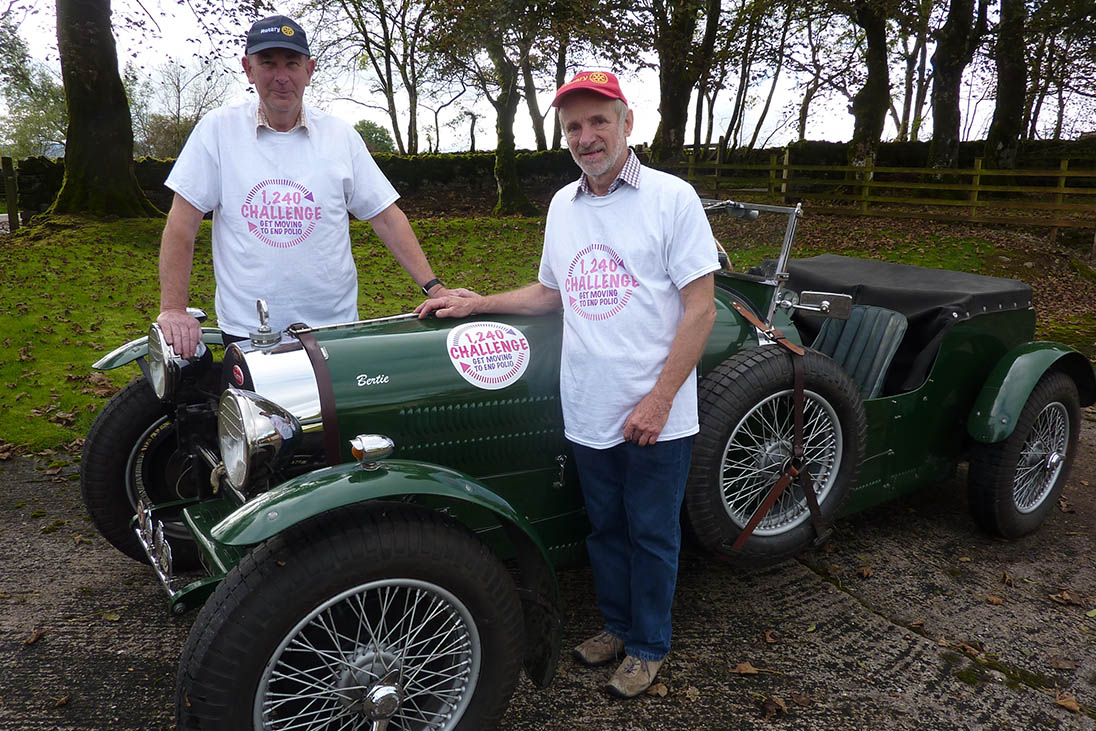 John and Roger’s 1240km journey took them from the north of England to Essex and back again.

Now 398 miles down, or 640 kilometres, Roger and John headed back home to Cumbria. Driving straight back home the following day, they were met by torrential rain on the journey from Essex to the north-west.

“We ran into torrential rain around Newark and it never let up until we arrived back into the Eden Valley some five hours later,” added Roger. “By which time everything was soaking wet including the contents of our suitcases.

Get Moving to End Polio! Our new #Purple4Polio fundraising activity is inspired by the length of the border between the remaining two polio-endemic countries.

Roger is an avid supporter of Rotary’s End Polio campaign. “I like to annually have a project for this good cause,” he added. “This started way back in 2005 with the Rotary Centennial Car Run.

“When the Get Moving to End Polio 1240 Challenge was first announced, it was too good an opportunity to miss when it could be tied in with World Polio Day.”

Find out how you can get involved with the Get Moving to End Polio 1240 Challenge by visiting our project page.