There has recently been plenty of reasons to celebrate for Rotary clubs across the isles, from momentous anniversaries to deserved award recognition for club members.

The Rotary Club of Cork recently celebrated it’s 95th anniversary and wanted to mark the occasion in a unique and interesting way.

With the club having nearly a century of incredible service to commemorate, President Willie O’Brien wanted to draw attention to as much of that service as possible and his lightbulb moment came when he saw the empty windows of a closed Debenhams of Patrick Street.

A few phone calls, emails and a heap of goodwill later, the club were able to proudly display a unique mural across the shopfront that chronicled some of the club’s most important activities over the past 95 years. 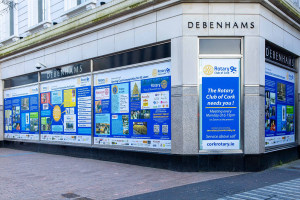 Residents of Cork could stop and see Cork Rotary’s 95 year history on the unique display.

The display also acts as a thank you to the people of Cork who, over the years, have provided hundreds of thousands to support those less fortunate than themselves, most recently displayed by the Rotary Remembrance Tree.

2021’s Rotary Remembrance Tree was launched alongside an app in order to adapt to the constraints of the COVID-19 pandemic. As well as using the app to donate to local charities, residents of Cork could send in messages of remembrance that Cork Rotarians would write it down on yellow ribbon and place it on the physical Christmas tree in the city centre.

A member of Doncaster Rotary has been granted the British Citizen Award at the recent ceremony that took place at the House of Lords.

Stuart Smith joined the club to help after flooding in Doncaster had made national news in 2019 as he had previous experience in organising volunteers for rescue and renewal work after the Somerset floods of 2014.

Along with Doncaster’s daughter clubs, St Leger and St George’s, the club set up a company to reinstate the uninsurable gardens of affected homes both in the rural village of Fishlake and the urban district of Bentley.

From the start, Stuart had a clear idea of what needed to be done, where and how to get volunteers and how to obtain grants and donations of materials from firms both local and far afield. 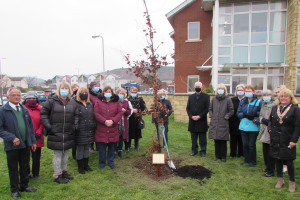 Members of Llandudno Rotary and friends of Dr. Raafat Lotfy Nagib were there for the ceremony.

Doncaster Rotary’s President, Adrian Hattrell, accompanied Stuart to the ceremony and after being given the award Stuart is now entitled to display BCAc after his name.

Finally, the Rotary Club of Llandudno recently donated a purple beech tree that was planted outside Llandudno Hospital in commemoration of Dr Raafat Lotfy Nagib.

Dr Nagib was was based at Llandudno Hospital between 1989 and 2018 and who is remembered with great affection by so many patients and staff from over those 30 years.

The poignant ceremony was arranged by Rotarian Mike Perry on behalf of the club and was attended by Dr Nagib’s widow Mrs. Deborah Nagib and her father, as well as senior members of the hospital, Llandudno Rotary President Rosalind Hopewell and six other Rotarians and friends.