As the world watches the destruction of Ukraine following Russia’s invasion in February, we reflect on Rotary in Ukraine with a series of articles which were written just before the recent conflict. 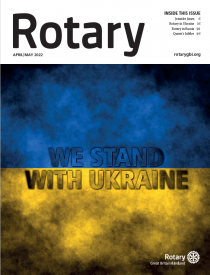 The first Rotary clubs within the current borders of Ukraine were chartered in the 1930s in the cities of Uzhgorod, Chernivtsi, and Lviv.

During World War Two, Rotary clubs disbanded in territories under conflict, and clubs were forcibly dissolved during the Cold War in countries under Communist rule.

After the collapse of the USSR, several clubs in Europe and North America sought to re-establish Rotary’s presence in the former Soviet countries.

Listen to the audio version of Rotary Magazine

Lu’s family fled Ukraine during World War II, and years later, as president of the Rotary Club of Clarkston, Michigan, he organised several Rotary projects: delivering medical equipment to Ukrainian hospitals, assisting the victims of the Chernobyl nuclear disaster, and recruiting doctors to perform eye surgeries for the needy.

After Ukraine declared its independence in 1991, Lu helped to charter the first Rotary club in the capital, Kyiv. John Hewko is a charter member.

In the early 1990s, Ukraine was part of District 1420, along with all the clubs in the former USSR, as well as some in Finland.

Other district affiliations followed, until finally, in November 1999, Rotary International decided to integrate Ukraine and Belarus with Poland in District 2230. This came to fruition on July 1st, 2000.

Our 10-year Rotaract past has become a classic example of young leadership development that creates the conditions for a natural transition into the ranks of Rotarians.”

With the steady growth of Rotary in these three countries, the district was split into Districts 2231 (Poland) and 2232 (Ukraine, Belarus) in July 2016.

Russia’s annexation of Crimea in 2014 and the armed conflict in the Donetsk and Luhansk regions (collectively known as the Donbas) have hindered Rotary’s development in Ukraine.

In 2013, there were seven Rotary clubs in Crimea and the now-occupied areas of the Donbas, with a combined total of about 110 members.

In the rest of Ukraine, however, Rotary is undergoing robust growth on the strength of an influx of members who have joined since the beginning of that conflict. The national impulse to engage in humanitarian work and disaster assistance remains strong in Ukraine.

Since 2014, Rotary has grown from 49 to 62 clubs, with an additional six satellite clubs.

Membership has increased from 800 to 1,100 – and, prior to this latest conflict, members of Rotary in Ukraine were very optimistic about the organisation’s continued growth.

Many clubs in Ukraine have initiated their own projects to bring peace to the country.

During that same time, more than 1.6 million people from Crimea and the Donbas fled their homes and became displaced within Ukraine, while three million remained in the territories controlled by armed militia forces.

Over the past eight years, Rotary clubs in Ukraine have provided medical and psychological assistance to victims of the conflict and have supported the largely displaced population, while also delivering relief supplies to those who lived in frontline territories.

Rotary International had called for peaceful dialogue within divided communities and between the governments of Russia and Ukraine.

Members had been sponsoring efforts to locate and remove land mines in combat areas, while also educating the public about minefield demarcation and identification.

For the victims of land-mine injuries, Rotary clubs had set up rehabilitation centres in frontline areas.

As part of their efforts to help restore the Donbas region, Rotary members were planning and creating business opportunities that can promote the restoration of communities for reintegration into the national economy.

However, the Russian invasion of the country in February has put paid to those plans – for now…

Rotaract began our passion for service

Mykola and Olga Stebljanko, the Rotary E-Club of Ukraine

Our Rotary life began in 1996, when we joined what would become the first Rotaract club in Crimea: the Rotaract Club of Simferopol. Since then, Rotary has been an integral part of our lives.

Our 10-year Rotaract past has become a classic example of young leadership development that creates the conditions for a natural transition into the ranks of Rotarians. 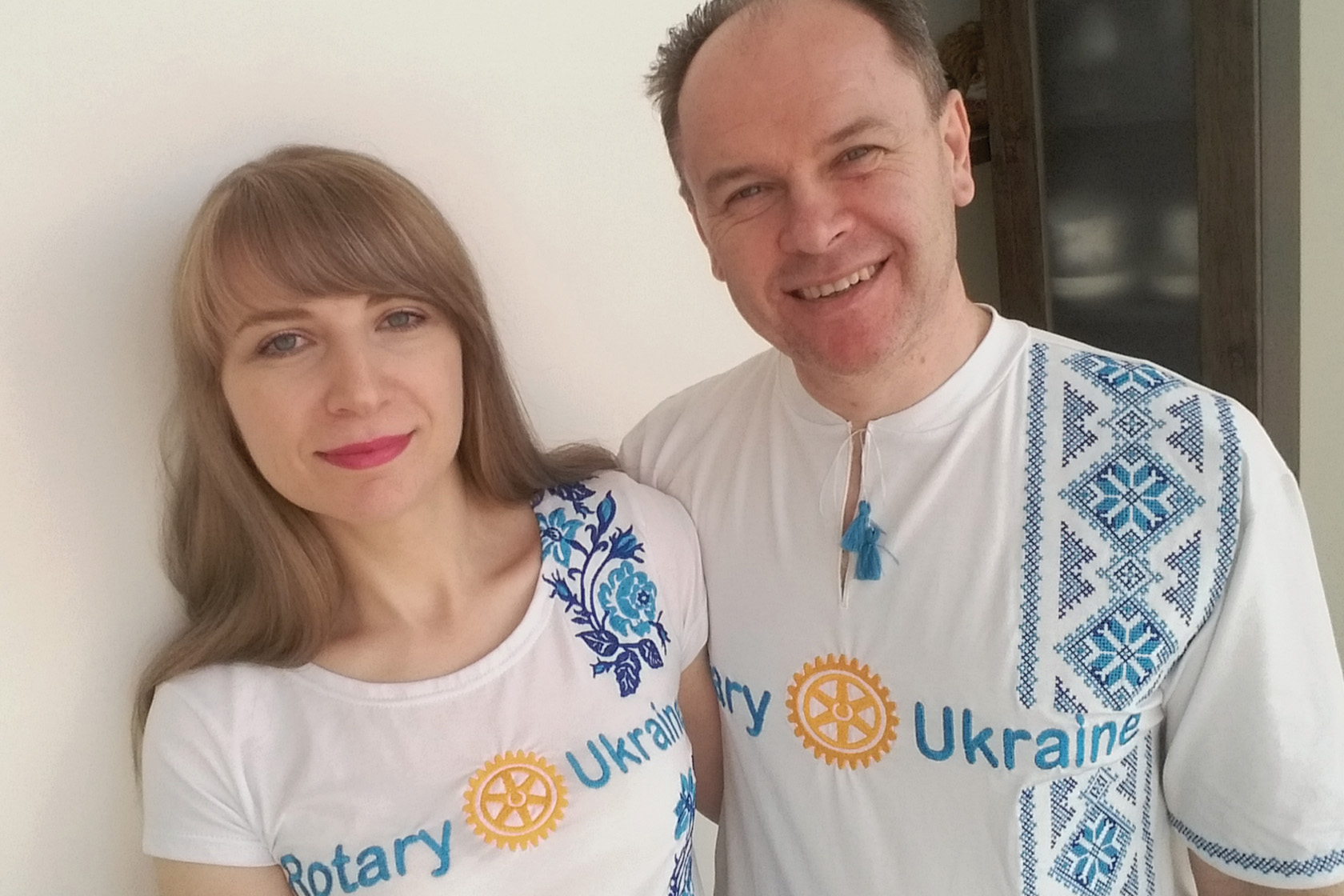 I was president of my club in 2013-14, but when the Crimean Peninsula was annexed during my term, we had to move to Odesa.

To continue our Rotary activities, we established the Rotary E-Club of Ukraine. This type of club, which was fairly new then, helped us and other Rotarians from Crimea and the Donbas keep our Rotary ties and sustain our community.

Our club brings together people scattered across thousands of miles. I was elected District 2232 governor for 2019-20 and now serve as a Rotary public image coordinator at the zone level.

Olga chaired the District Scholarship Subcommittee for two years, and the District Rotary Youth Exchange Committee since 2018. Together, we continue publishing Rotariets and providing virtual Rotary events in District 2232 and Zone 21.

In the spirit of peace

Yulia Zharikova, Secretary of the Rotary Club of Kyiv Advance

We were united by the idea of community service and our passion for art and music. The club supported young talents and devoted its energies to the development of educational programmes in the city.

In 2014, after the outbreak of military conflict in eastern Ukraine, many members of our club fled to different parts of the country and even abroad.

In 2014, after the outbreak of military conflict in eastern Ukraine, many members of our club fled to different parts of the country and even abroad.”

Subsequently, four club members who had moved to Kyiv decided to resume our club activities under the name Rotary Club of Donetsk Advance. Four other members who had ended up abroad or remained in Donetsk subsequently decided to keep their membership as well. So, we retained eight members.

In 2020, our club officially changed its name to Rotary Club of Kyiv Advance in accordance with the policies of Rotary International. Since relocating to Kyiv, our club has attracted many new members and even received an award from the District 2232 governor for adding the most new members in the 2019-20 Rotary year.

Given our experience from the conflict in eastern Ukraine, we have made peacebuilding and conflict prevention a main focus of our community projects. 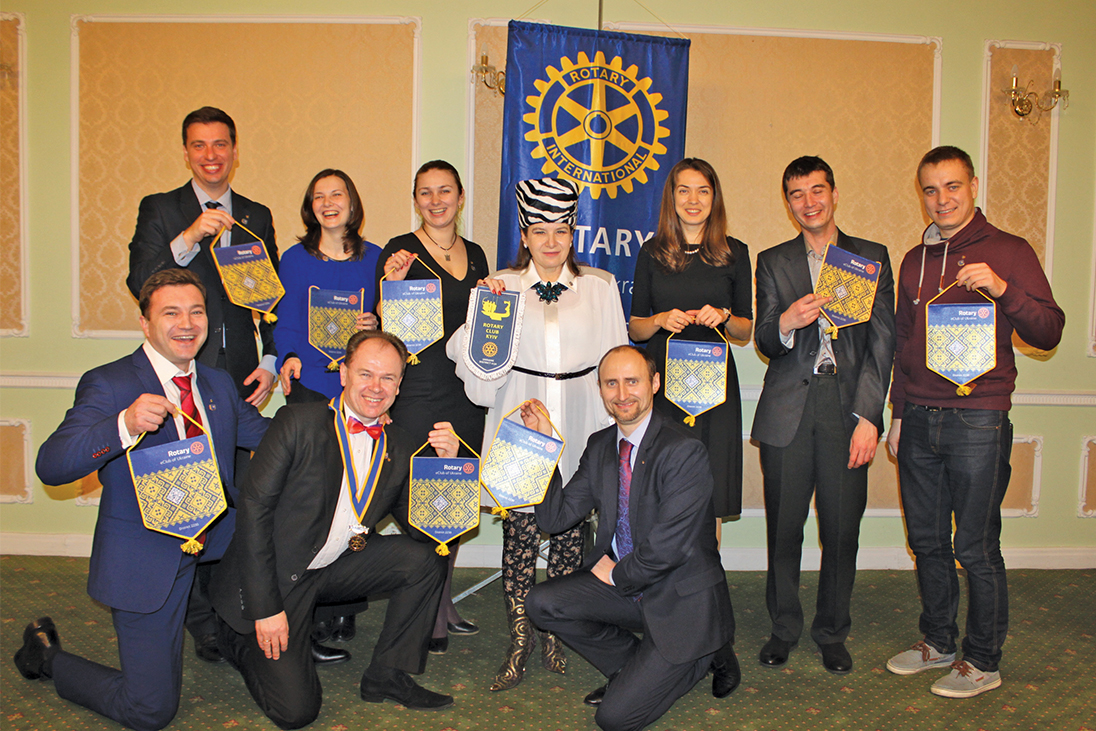 Members of Rotary e-club of Ukraine and Rotary Club of Kyiv.

One such project, running since 2017, offers training to various groups to promote dialogue toward reconciliation at multiple levels of Ukrainian society.

In addition, for the past five years, club members have been involved in a large international project for the psychological rehabilitation of children affected by war and military conflict in the east.

Nobody is left alone

The year 2014 became a time of testing for us, a test of endurance and humanity. On the positive side, Rotary brought us new strength, uniting a large number of people of different nationalities, faiths, and levels of prosperity with a common idea: to serve society.

In Ukraine, Rotarians from Lviv, Kharkiv, Dnipro, Poltava, Kyiv, Ivano-Frankivsk, Chernivtsi, and the conflict areas of Donetsk — they were still holding on at that time — helped people who had fled the war, as did Rotarians from Moscow and Krasnodar in Russia.

We reached out to those Ukrainians who had lost their livelihood and were left alone in misery. Some helpful Rotarians had sent groceries, baby food, and clothing; others sent personal care products and medicine. 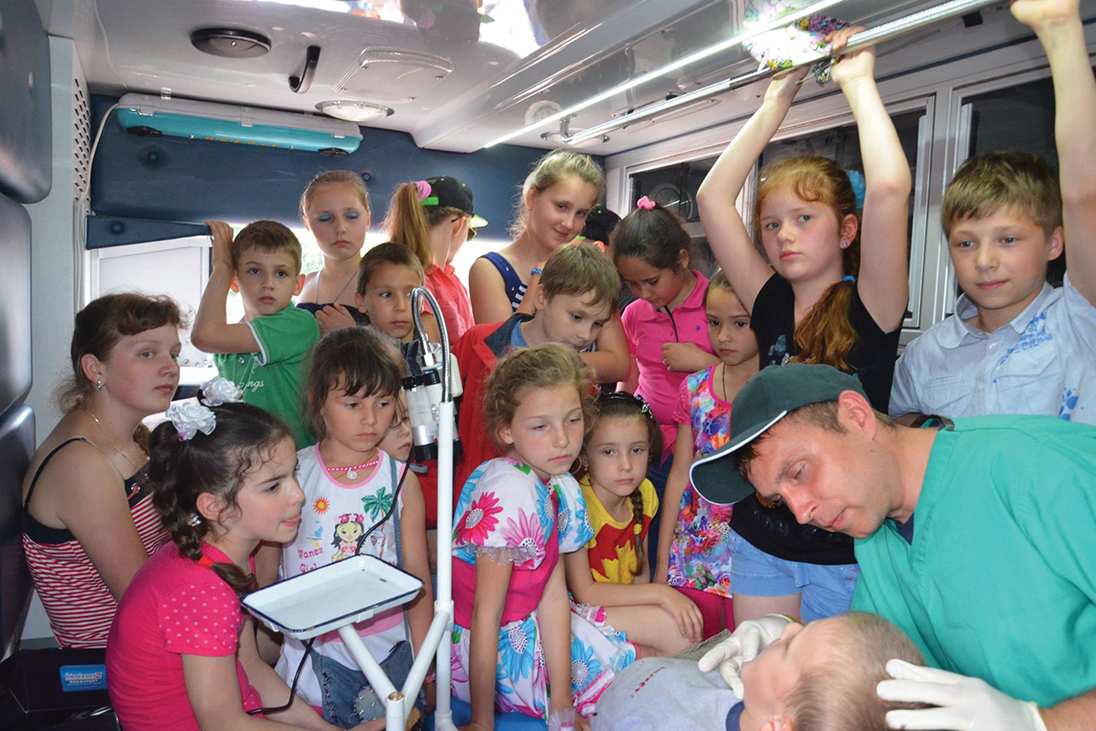 We organised logistics to help refugee resettlement. We served meals, distributed gifts, books, and clothes to people in the disputed territories, and, in the evening, delivered grocery packages to large families.

Together with the Rotary Club of Lviv, we also organised a mobile dental practice.

In 2015, with the help of other Rotary clubs in Ukraine, we established a multi-media class at an art school in the city of Sloviansk, and, in 2016, the Rotary Club of Sloviansk endowed a choreography class for children.

Other club projects include replenishing libraries with modern literature, sponsoring sports teams, and supporting the ‘Believe in Yourself ’ project headed by world-champion Paralympic swimmer, Viktor Smyrnov.

We also provided funding for kindergarten classes for children living with visual, mental, and musculoskeletal disorders. 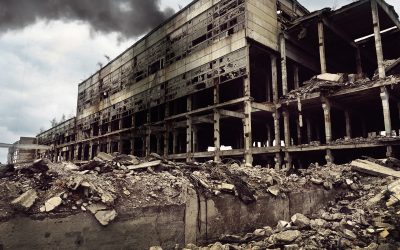 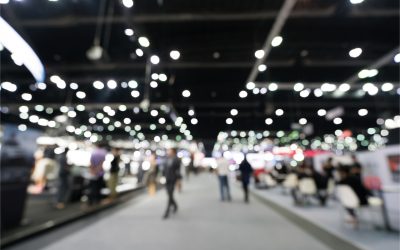