K.R. Ravindran on how polio was still a concern in his country within the 1990’s and the obstacles that have been overcome.

In the early 1990s, polio was still a concern in my country.

As the Sri Lanka PolioPlus Committee chair, I was part of a task force of Rotarians, government officials, and UNICEF representatives that drove all polio eradication efforts, including National Immunisation Days (NIDs).

But those were difficult days; civil war was raging in Sri Lanka. The government said NIDs could happen only outside conflict zones. This meant one-third of the country’s children would not be vaccinated — an unacceptable proposition.

Rotary stepped in with UNICEF to engineer a cease-fire. Establishing contact with one of the world’s most feared and elusive rebel leaders was not easy, and we were careful to maintain Rotary’s good name during negotiations.

A few weeks later, my secretary delivered a letter to my office, her hands shaking. Signed by the rebel leader himself, it read: “Dear Mr. Ravindran: If you can persuade your government to stop the war for two days, then we are willing to lay down our guns for two days too, for our war is not with children.”

Establishing contact with one of the world’s most feared and elusive rebel leaders was not easy, and we were careful to maintain Rotary’s good name during negotiations.”

Soon the NID was on, and vehicles bearing the Rotary emblem travelled to the vaccination booths in the areas occupied by insurgents, receiving the same respect and courtesy as the Red Cross.

Obstacles can seem insurmountable until we overcome them.

In March 2020, the polio programme made the tough decision to temporarily suspend polio immunisations while the polio infrastructure that Rotary members had helped build was used for COVID-19 response.

But with the wild poliovirus now banished from the African region and circulating in just two remaining countries, we continue to move forward. Our history shows that we can overcome even the most difficult situations. But we can’t do it without your help.

But with the wild poliovirus now banished from the African region and circulating in just two remaining countries, we continue to move forward.”

World Polio Day is on October 24th, and it’s the greatest opportunity we have to raise funds and awareness for Rotary’s polio eradication efforts. Visit End Polio Now to get tools for planning virtual events and fundraisers, and to register your club’s event.

Please consider making a donation to End Polio Now, to be matched two-to-one by the Bill & Melinda Gates Foundation.

In the face of a pandemic, there is a serious risk of further spread of polio.

Your support is more important than ever, and it will ensure that together we can tackle the remaining obstacles and achieve a polio-free world.

We have promises to keep 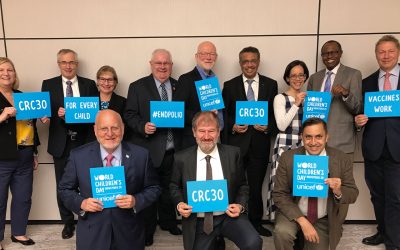 The Big Interview: Michel Zaffran – Director of Polio at WHO