Just before lockdown, in January 2020, Manoj Joshi led a group of Rotarians to Amritsar in Northern India to assist medical teams during polio immunisations. The retired pharmacist from Bradford reflects on why polio must remain a key goal for all Rotarians.

End Polio Now is a cause I have supported throughout my life, firstly as an Interact member in Uganda, and then as a Rotarian for almost 40 years in Yorkshire.

I even remember having the polio vaccination on a sugar cube as a child in Jinja. To rid the world of a life-threatening and crippling disease within our lifetime is a monumental accomplishment for humanity. 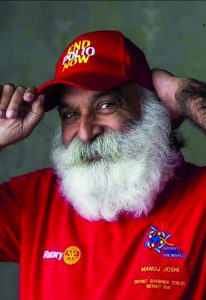 This is the whole point of Rotary, and I take personal pride in the accomplishments of our organisation as whole.

It was a huge honour to serve as District Governor of Yorkshire and North Lincolnshire for Rotary International 2019-2020.  I was resolute about raising the status and profile of the amazing work of Rotarians in the community at large, and made a point of saying ‘yes’ to every invitation and opportunity to participate in anything Rotary related with my family.

I kicked off the year by unveiling my Mercedes branded with Rotary and #EndPolioNow signage at the handover dinner which was attended by 350 guests.

I also commissioned 300 blue custom shawls with the theme of the year ‘Rotary Connects the World’ to honour all of the clubs’ presidents in the district, as well as other long serving and visiting Rotarians in a meaningful way.

To commemorate World Polio Day on October 24th, 2017, I organised for the city centre of Bradford to be draped in purple lights and it since has become an annual activity.

In 1972, my family and many others had to flee Uganda as a result of the dictator Idi Amin’s expulsion of the Asian minorities. That’s how we arrived in England, as refugees.”

In 2020, landmarks all over the district; in Bradford, Halifax, Knaresborough, Wetherby, Louth and Brigg were lit up purple, as well as other parts of the UK and even Table Mountain in South Africa.  My wish is for purple lights to adorn monuments all over the world as beacons of hope for humanity.

In order to engage the South Asian community in the campaign, I approached my good friend, Younis Choudhry, the founder of Regal Foods PLC, one of the UK’s top-10, food and confectionery bakery businesses, based in Bradford.

My vision was to create a uniquely branded #Purple4Polio Madeira cake which was sold in shops nationwide for the month of October.

In January 2020, just before the global lockdown to curb the Covid-19 pandemic, I had the honour of leading a delegation of British Rotarians to India, along with my wife Bhavna and daughter Megha, to assist immunisation teams and Rotarians for the National Immunisation Day in Amritsar. 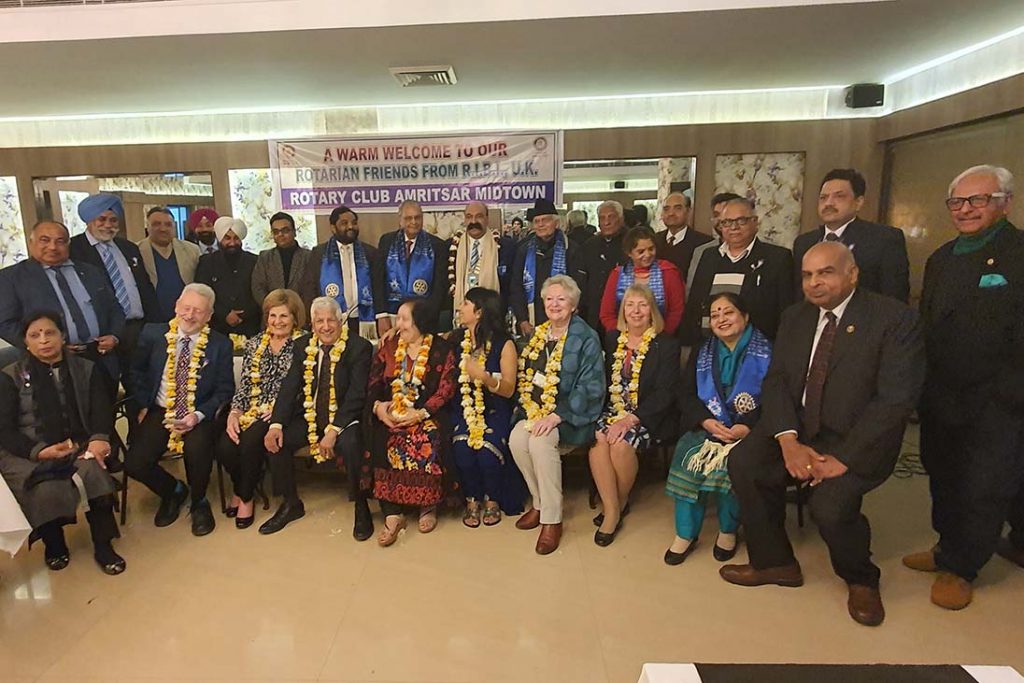 Manoj and the visiting British Rotarians receiving a warm welcome in Amritsar.

Amritsar lies close to Pakistan where the virus still remains – even though India has been polio-free since 2014.

Rotarians from the Rotary Club of Amritsar oversaw our activities and proudly showed us all of their brilliant initiatives to alleviate poverty.  We will never forget their friendship.  All it takes is one determined individual to create a huge impact.

Rotarians in the UK raise vast sums of money in the fight to eradicate polio, and we were able to see for ourselves how that hard-earned money was being used.

In fact, when I joined the Rotary Club of Bradford in 1983, our club raised the most funds in the district. 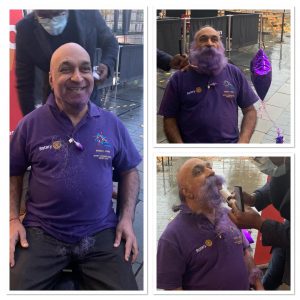 Manoj shaving off his hair which he had dyed purple in support of ‘End Polio Now’, raising over £21,000 in the process.

I felt blessed to have the opportunity to immunise children protecting them for life, and personally administered the vaccine to around 80 children.

To commemorate World Polio Day last year, and raise maximum awareness and funds for the cause, whilst having fun, my daughter Megha suggested dying my giant overgrown lockdown beard and trademark moustache of 52 years bright purple, and then shaving everything off – including my ponytail.

We did the shedding in the open air, in front of City Hall, in Bradford.  It was even streamed Live on Facebook.  To my delight, over £21,000 was raised!

For the first time ever, my wife and children, and everyone saw me without my trademark ‘tash!

I felt so exposed, even on Zoom!  However, it felt amazing to do something so personal for the benefit of others and now over 105,000 children will be immunised from this crippling disease for life.

In 1972, my family and many others had to flee Uganda as a result of the dictator Idi Amin’s expulsion of the Asian minorities. That’s how we arrived in England, as refugees.

Rotarians from the Rotary Club of Amritsar oversaw our activities and proudly showed us all of their brilliant initiatives to alleviate poverty.  We will never forget their friendship. All it takes is one determined individual to create a huge impact.”

Seeing the current humanitarian crisis of the Afghani people trying to escape Taliban rule, brings back those memories of despair and desperation.

As a refugee, I know what it is like not to have, but the act of service and giving has enriched me with abundance in so many ways.

Therefore, it is imperative that, as Rotarians, we do not forget our supreme principle of ‘Service Above Self’ which has been universally accepted for 116 years.

No other organisation in the history of humanity has given aid regardless of politics, ethnicity or religion.

We must not leave anyone behind, especially minorities, women and children.

As we approach World Polio Day on October 24th, I urge non-Rotarians to engage with us, so we can continue to alleviate suffering in critical areas and eradicate polio, all while imparting hope for humanity. 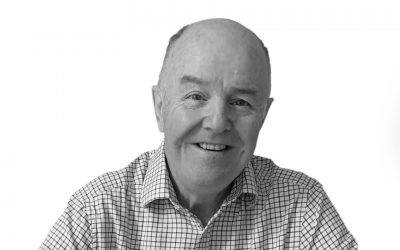