Baroness Tanni Grey-Thompson, one of Britain’s greatest Paralympians, was on hand to support a Rotary sports event in north-east England.

Here’s a shout of triumph from a young man in the sports centre darts area. Quiet concentration emanates from the participants in the carpet bowls contest. Excited cries echo from the sit-down volleyball court.

Outside, the battle of the mixed five-a-side footballers rages, the club throwing is in full swing and a girl throws her arms up in triumph as her flight hits the marks in the archery competition.

It’s noisy, compelling and exhilarating – but most of all it’s huge fun.

This is the Rotary North East All Ability Games. Its Patron is Baroness Tanni Grey-Thompson of Eaglescliffe, who arrives at Middlesbrough Sports Village for the opening ceremony, stays for the entire day and presents the awards.

Nearly 300 differently-abled people took part in this, the 28th annual games – with the inevitable Covid-caused gap – and the joy at being there is evident on the competitors’ faces. 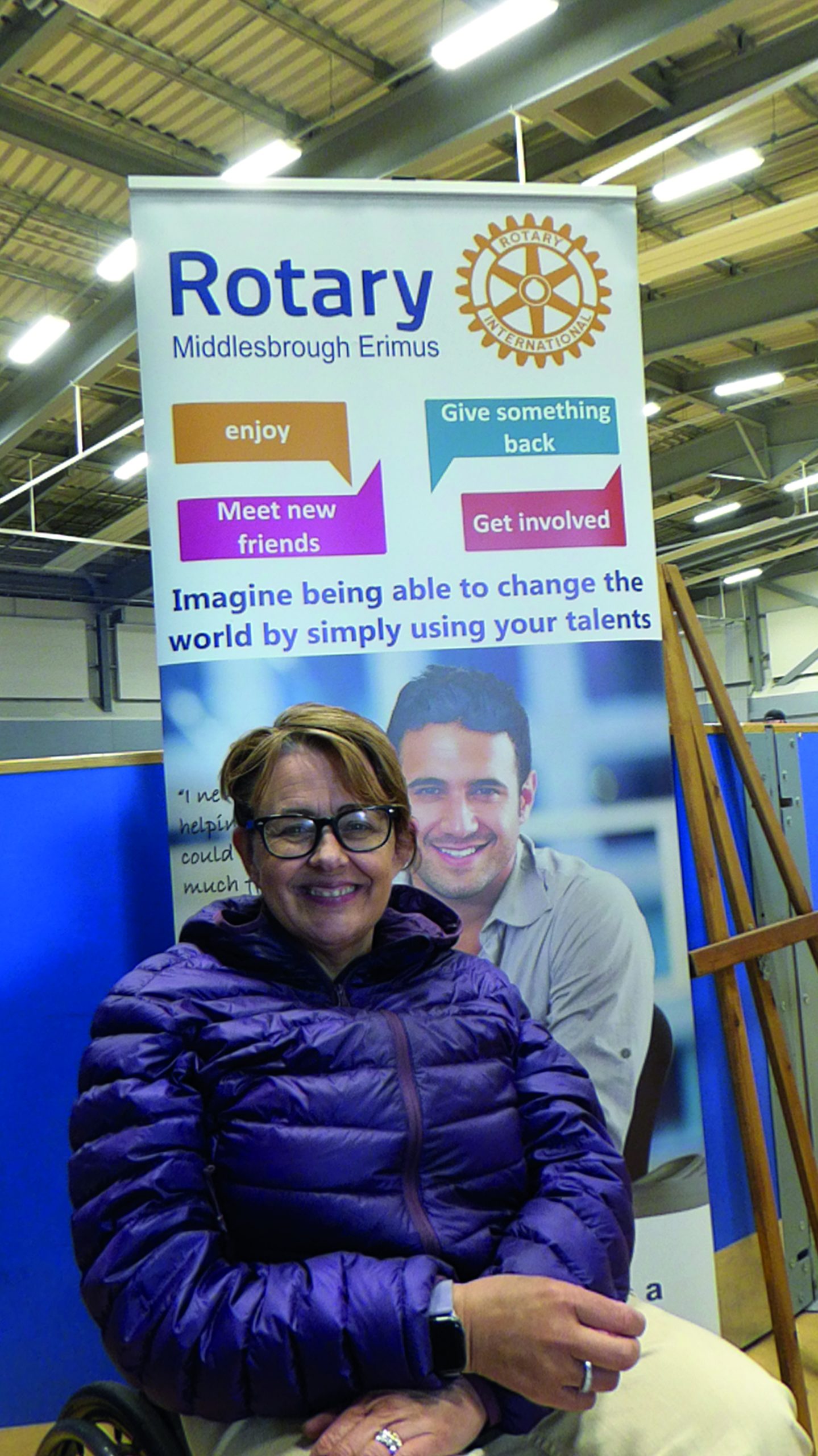 Baroness Grey-Thompson isn’t new to Rotary competitions of this kind – she took part in similar games when she was very young – but this is the first time she’s put her name to an event.

“I was very pleased to be asked – it’s a wonderful event,” she said.

She talks about her own start in sport: “I was very lucky to have been encouraged to try everything in the sport when I started out. I was rubbish at most things, then, when I found my forte – wheelchair racing – I just tried to be the best I could be.

She of course went on to win 16 Paralympic medals, including 11 golds. But, she said, it’s not all about being a Paralympian.

“It’s okay not to be good at sport – not everyone can excel. But it is important to be active, and everyone needs the opportunity to be just that, in events like these games.”

Baroness Grey-Thompson recognises that local authorities have tough choices to make when it comes to funding events of this kind. Volunteer organisations like Rotary can make a huge difference, she says.

“As well as the joy of it, sport and activities of all kinds get people out and together and can mean that instead of people living with frailty for 40 years, they can be more active and fitter in later life.”

It’s wonderful how all the competitors get to know each other and, despite the differences in their abilities, they make friends and laugh and joke with each other.”

Baroness Grey-Thompson visits the various indoor and outdoor sites at the games – with activities such as shot-putting, frisbee, kurling, table tennis, and javelin – and is stopped about every five yards by a participant, parent or carer. She talks to them all.

Over at the bowls, Hartlepool Rotary is marshalling the competitors.

Member Jane Tilly says: “It’s wonderful how all the competitors get to know each other and, despite the differences in their abilities, they make friends and laugh and joke with each other.”

Richard Dyke is a member at Teesside West Rotary, which organises the darts.

They constructed specially made boards for the event. “It’s great fun and they can all have a go. We had one young man in a wheelchair who was determined to take part, so we managed to get him at an angle to throw. And he hit the board. Think it made his day – and his dad’s.”

We adopted the idea and it just really grew from there. It’s wonderful to be back after all this time and to see how much people are enjoying themselves.”

Mike Hall is a member at Darlington Rotary, which brought sit-down volleyball to the games about four years ago. “It’s noisy and uneven and competitive, but the participants love it and keep coming back for more.”

All around, participants are moving from one event to another. Tony is a veteran competitor. As well as having a go at many events, he does card tricks, amazing the registration team at the kurling with a series of magical sleights of hand.

Two young sisters, Tanya and Anne-Marie, throw themselves into everything. Anne-Marie rushes up to her sister at the archery area and declares with evident elation: “I hit something!” 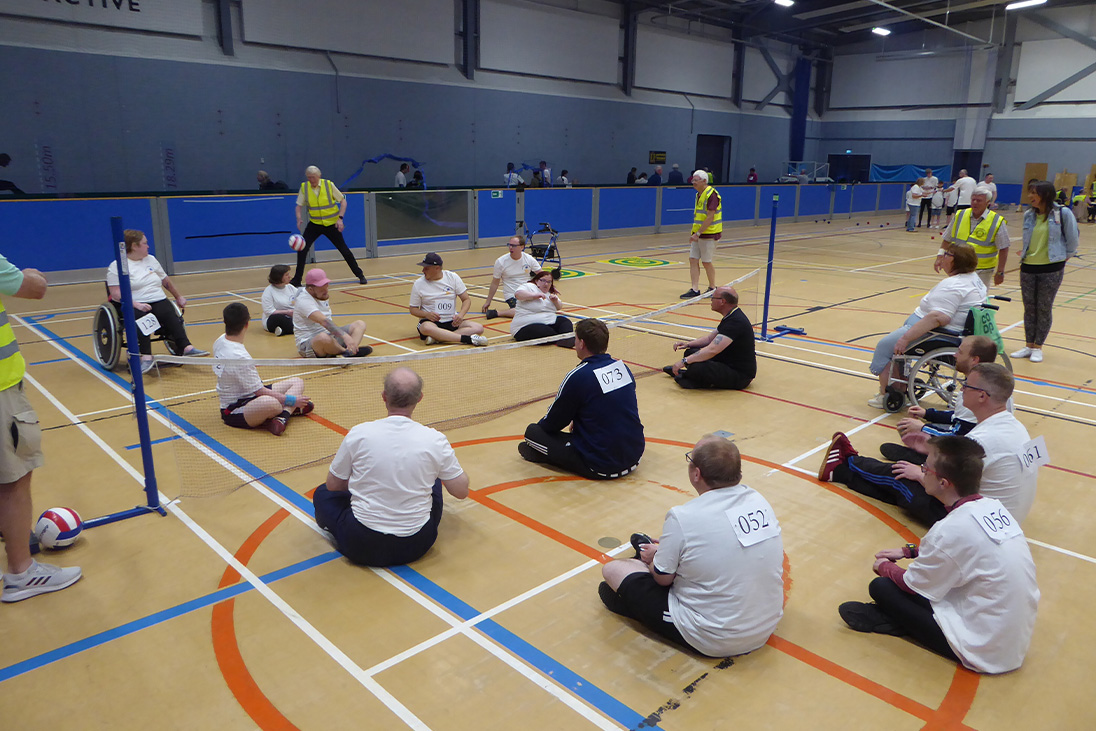 The teams are preparing for the All Ability volleyball tournament.

Simon throws his fist into the air and laughs with delight as he rolls over backwards, after getting the ball over the net in the volleyball.

The All Ability Games were set up by Middlesbrough Erimus Rotary, but others joined as the games expanded, in particular Teesside West Rotary.

Chairing the multi-club organising group is Mike Overy from Middlesbrough Erimus. He said the idea came to them from Coventry in 1994, where they ran something similar.

‘We adopted the idea and it just really grew from there. It’s wonderful to be back after all this time and to see how much people are enjoying themselves.’

The then North East District Governor, Alan Cartwright, said: “These games are an excellent example of Rotary clubs working together, providing opportunities to members of our local community, often overlooked.”

The awards ceremony is a noisy affair, watched by carers, families, friends and 70 Rotary volunteers from a number of North East clubs, everyone applauding the triumph of each competitor.

Baroness Grey-Thompson hands each one a medal to hang around their necks. But really, everyone is a winner at these games. 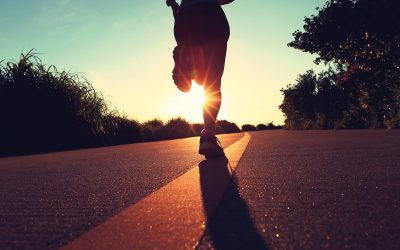 Rotarians on the run 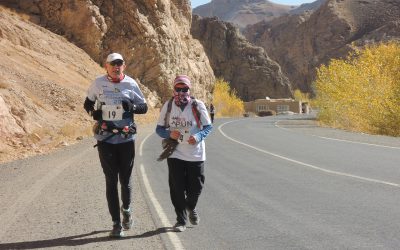 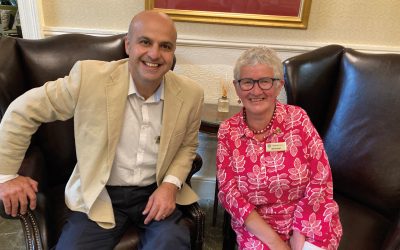