In Lancashire, Rotarian Terry Harrison from Blackpool Palatine Rotary was involved in a litter pick in Layton with dancers from AVR Dance. All of the equipment was supplied by Diane Farley from ENVECO.

In similar fashion, members of the satellite club at Langley Park Rotary in Kent were also out litter picking this weekend. And in Berwickshire, Scotland, Eyemouth Rotary collected more than 50kg of rubbish along a stretch of road in a single day.

Rotarians from Church & Oswaldtwistle in Lancashire were out in force at the Ossy & Church railway station removing old flowers wooden boxes and making room for a new one. They also did litter picking.

Sale Rotary in Greater Manchester made the most of the good weather to work on the Hope Road flower bed. 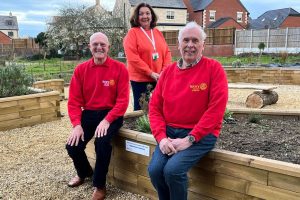 Members of the Rotary Club of Stamford St Martin’s with the newly transformed well-being garden.

In Lincolnshire, Rotarians from Stamford St Martin’s worked with Mindspace volunteers to transform an overgrown and derelict allotment into a safe place and well-being garden for the people of Stamford.

Nine residents from Whittington near Oswestry in Shropshire has have been fully trained to use CPR and a defibrillator thanks to Oswestry Rotary. In the eight years the club has been running the community project, they have trained nearly 1,000 people.

In North Yorkshire, Scarborough Rotarians took on the ‘Get Caked’ challenge in muddy conditions at Sledmere Hall. This involved negotiating a five-mile course including climbing over logs, crawling through muddy trenches, jumping through tyres and taking on the infamous ‘Sledmere Slide’. They were raising money for the Rotary club’s Rotary 100 project.

In Devon, the Rotary Club of Exmoor Challenge attracted a number of walkers over the weekend, enjoying fine weather. Torquay Rotary’s team of 14 was part of a District 1175 contingent who won the challenge for the first time in 11 years. Money raised will go to the Children’s Hospice South West. 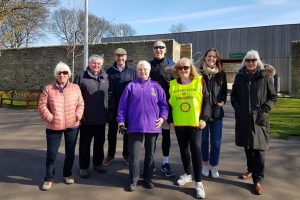 Edinburgh Rotarians did a charity walk to raise money for End Polio Now.

Mark Edwards, a multi-Ironman and a member of the Haverfordwest Rotary Club in Wales has qualified for the Ironman World Championship in Utah, USA next month.

In Scotland, Rotarians from Oldmeldrum and District and Ellon Rotary clubs in Aberdeenshire planted fruit trees in the Queen’s Jubilee Fruit orchard at Haddo.

Thanks to the generosity of sponsors and fans at Burton Albion Football Club, Burton-on-Trent Rotary Club raised over £8,700 for charities and other local causes at their annual Poster Parade. This included a bucket collection on the day that raised more than £1160 going directly to supporting Ukrainian refugees. The remainder was provided by 150 companies who paid to have a poster carried around the ground during half-time. 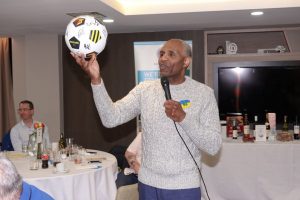 A partnership between the Seaford Rotary in East Sussex and Rotary Bali Ubud Sunset has resulted in the installation of six water tanks for families in the remote Seraya Barat community in Bali, Indonesia. Water and Sanitation is one of Rotary’s seven areas of focus. Rotarian Julia Parini developed a relationship with these Rotarians whilst holidaying in Bali.

The sun shone for Northampton and Northampton West Rotary’s classic car show. The event featured some amazing classic cars with Rotarians from both clubs helping with the organisation of the day. Donations received will be distributed to Rotary-supported charities.

Tom Harper, President of Chelmsford Mildmay Rotary from Essex, handed over cheque to Michelle Johnson from Chelmsford Community Transport, as part of the proceeds from the club’s Santa Sleigh last December.

Their funds will be applied towards the creation of an educational unit where volunteers will pass on key skills to help people cook economically and nutritionally. In addition to this enormous warehouse, they have eight outlets within Cardiff, 190 volunteers and handled 157 tonnes of donated food last year. 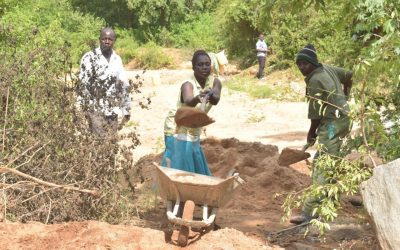 From dam’s in Kenya to dogs in Darlington

This roundup covers a set of recent extraordinary achievements in the Rotary world, from a Rotarian getting his long-awaited MBE to raising money for guide dogs.