As images of the tragedy in Ukraine continue to reach the UK and Ireland, Rotary clubs across the isles remained determined not to let down those who need their support.

Staggering amounts of money and supplies continue to be collected, such as at the Inner Wheel Club of Otley Chevin, Leeds. Over the past few weeks, the club had been collecting in a joint effort with their district to raise more than £62,ooo with more money still coming.

These funds are set to be donated to Rotary clubs in Ukraine and the bordering companies who will be able to use it to help those leaving the country.

A collection was also made at their District meeting with 25 other Inner Wheel clubs of medical supplies, nappies, baby food and hygiene products that were sent to the Jacob’s Well charity who will transport them to Ukraine.

Providing these vital funds can, literally, mean the difference between life and death and we’re committed to supporting those affected by the crisis however we can.”

Meanwhile, The Rotary Club of Guernsey have turned their attention to supporting aid efforts in Ukraine by donating £8,900 to the Wessex Rotary CIO appeal, which is set up to help charities in areas affected by the conflict.

The club is focussed on helping frontline medical professionals in Ukraine and it’s neighbouring countries by giving financial aid to the International Rotary Fellowship of Healthcare Professionals who are providing vital medical services over in Ukraine.

Speaking to the Guernsey edition of the Bailiwick Express, Guernsey Rotary member Simon Wood said: “The main challenge facing those on the frontline is treating the many civilians injured by the conflict, many of whom are sadly children.

“The direct contact that the Fellowship has with those on the frontline paints a truly harrowing picture with the situation worsening day-by-day.

“Hospitals are at capacity, medical infrastructure has been destroyed and many patients are at risk of being left without access to medicine or care.

“Providing these vital funds can, literally, mean the difference between life and death and we’re committed to supporting those affected by the crisis however we can.” 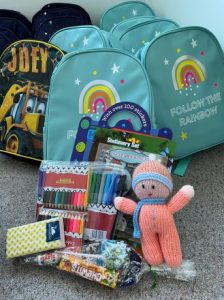 An example of the backpacks and items donated by Canvey Coast Rotary Satellite Club.

Rotary club’s everywhere have been blown away by the support from their local community’s in the bid to raise as much as possible for Ukraine. Up in Scotland at Kirkcudbright’s first farmers and producers market of the year, Kirkcudbright Rotary Club got invited along to the proceedings and were given a stand that they used to raise money for orphans in Ukraine.

The club raised a wonderful £700 which can now be sent to The Dnipro Kids Appeal – a charity set up by supporters of Hibernian FC that has helped 46 orphans to safety since the conflict in Ukraine started.

Helping the youngest affected by the conflict in Ukraine has been a big focus for some Rotary clubs, as shown by the recent collection done by the Canvey Coast Rotary Satellite Club.

When club member Vivien Tugwood saw that there was a need for children’s backpacks and items as part of Rotary’s Ukraine appeal, she set about getting the backpacks and filling them with both purcashed and donated items such as stationary and cuddly toys.

It’s also evident that the scenes in Ukraine has affected every generation of Rotarian. An example of this is the work of the Interact group at The Bishop’s Stortford High School as supported by the Rotary Club of Bishop’s Stortford, Hertfordshire.

The group organised  a non-uniform day at their school which generated over £2,300 for the Disasters Emergency Committee Ukraine appeal fund and their plea for supplies ended up filling a whole minibus with donations destined for UK-AID – a charity taking supplies to Ukrainian refugees. 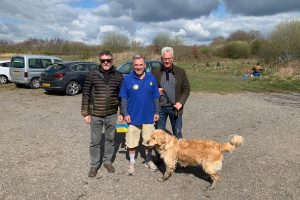 (From left to right) Rotarians Alan Robinson, Len Rainford and Geoffrey Shaw at the 24 hour walk.

Finally up in Merseyside, the Rotary Club of Newton-le-Willows raised thousands of pounds for Ukraine along with their local community by taking part in a 24-hour walking challenge.

Organised in collaboration with the Newton-le-Willows community group Business For Youth and the Friends of Lyme and Wood community group, the club joined participants from across St Helens to walk a two-and-a-half mile circuit around Lyme and Wood park for an entire day.

On an amazing day of refreshments, live music performances and general support from the public, both in-person and online donations reached more than £2,500 which will be going to the British Red Cross. 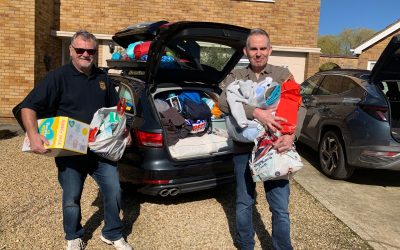 We take a look at a few Rotarians and Rotary clubs who are driving their way towards Ukraine in an effort to deliver vital aid and supplies. 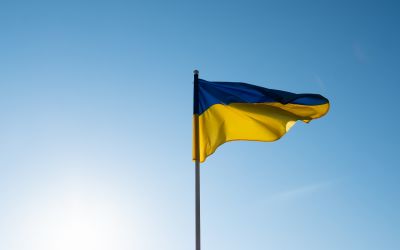 Guernsey Rotary will be celebrating its centenary in 2023 and is leading a project to restore the iconic Japanese Fishing Pavilion at Saumarez Park.