It was a football frenzy in Glasgow as a Rotary club in the city organised a successful tournament for primary school children.

Glasgow has a long tradition of producing legendary footballers such as Kenny Dalglish, Alex Ferguson and Danny McGrain.

And the Rotary Club of Charing Cross (Glasgow) continues to search for the next Scottish sporting gem with its annual primary schools’ football tournament.

The club has sponsored this competition for many years.  This year there were a record 20 teams featuring year 6 and 7 pupils from schools in the city.

The seven-a-side competition was played at the Firhill Complex in Glasgow, with three rolling substitutes in each team. It was run in conjunction with Glasgow City Council’s Active Schools initiative.

The enthusiasm of all 200 boys and girls was remarkable, rising to a crescendo of excitement when first one of the semi-finals, and then the final, were decided by penalty shoot-outs!

The cup and medals were presented by club President, Trevor Graham.

The Rotary club will next be supporting the Active Schools campaign with other Rotary clubs in the city through the roll-out of an experimental programme of sports coaching in primary schools across the Glasgow City Council area.

The Charing Cross club has recently returned from a Rotary exchange visit to Austria where they were hosted by the Saalfelden Rotary Club.

This follows a visit to Scotland by the Saalfelden Rotarians a year ago. In Austria, the Charing Cross Rotarians visited the famous Grossglockner High Alpine Road, the city of Salzburg, and enjoyed a cruise around the scenic Lake Zell.

Rotary scholars are an important part of the organisation. Since accepting a Rotary scholarship 13 years ago, Danielle Treharne has maintained close links with her sponsoring club in South Wales. 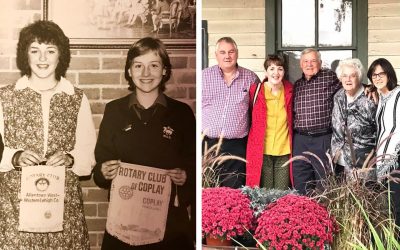 Julie West recently retraced her steps back to America from 41 years ago when she was part of the Rotary Youth Exchange.

Ade Adepitan is a familiar face on television screens, and a leading polio campaigner. But now he has turned his hand to writing children’s books, and the Londoner is donating proceeds from his latest novel to BBC Children in Need.

Rotary scholars are an important part of the organisation. Since accepting a...
Young people

Rotary scholars are an important part of the organisation. Since accepting a...
Young people