Wylde Green Rotary raised a tidy amount for Birmingham Dogs’ Home thanks to a sponsored event.

The walk covered a two-mile route and raised over £1,300 for Birmingham Dogs’ Home.

The event was so named given its close proximity to the American Independence Day. Red, white and blue were the order of the day.

Walkers had been sponsored by friends, family members and colleagues.

Based on the support and interest received I think it fair to say we’ll be running it again next year.”

John Bradin did particularly well raising in excess of £400, thanks to being sponsored by his colleagues at Glover Priest solicitors. John’s dog ‘Dougie’ went on to win the competition for ‘the best-dressed pooch’.

The Birmingham Dogs’ Home is based at Catherine de Barnes in Solihull. It takes in and cares for stray and unwanted dogs from the West Midlands area and finds new homes where possible.

The charity provides education to schools and other community groups in responsible dog ownership, whilst fundraising to ensure the on-going provision of service.

More information about the canine charity can be found on their website.

Event organiser Mark Wilkinson commented: “This was Wylde Green Rotary’s inaugural InDOGpendence Day event. Based on the support and interest received I think it fair to say we’ll be running it again next year.” 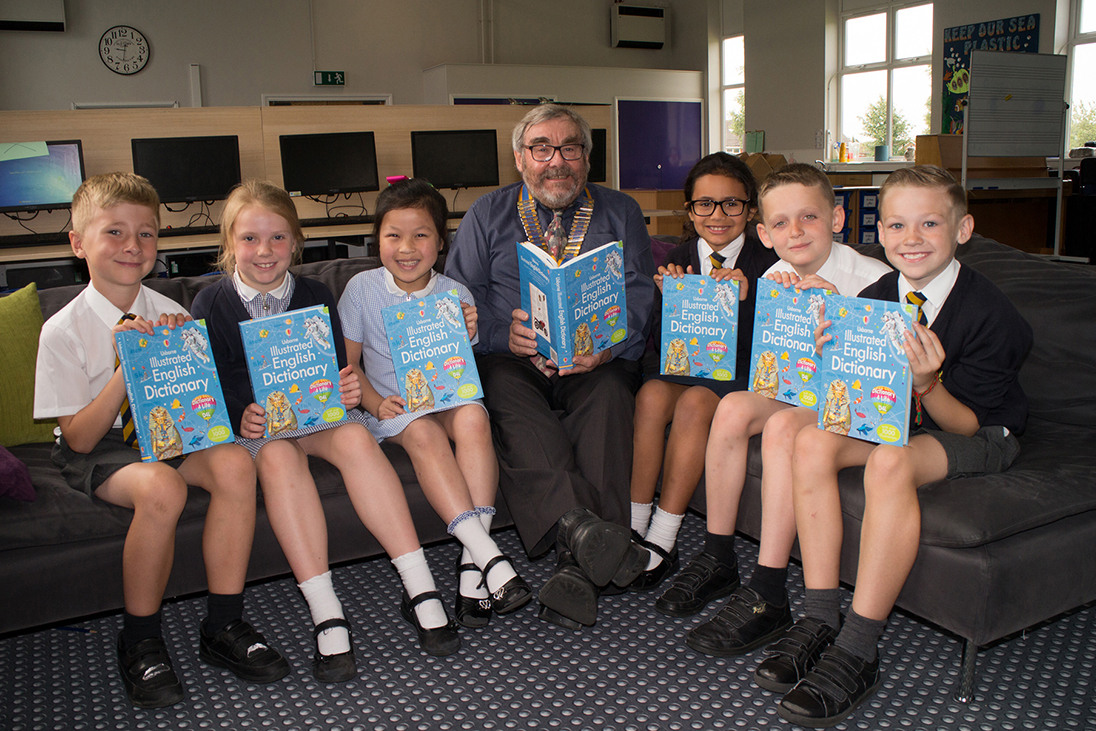 Dick Elston, President, Rotary Club of Wylde Green is pictured with pupils at Walmley Junior School who had just received their dictionaries. as part of the Dictionaries for Life project. (9 June 2019)

Meanwhile, for the 12th year running, Wylde Green Rotary has been supporting the national literacy programme with their Dictionaries For Life project. This year they have funded the project in partnership with the Aviva Community Fund.

The project reflects the priorities of the Rotary International movement nationally by gifting dictionaries to pupils in local schools.

This year the club has donated 250 dictionaries to pupils at Penns, Walmley, Wylde Green and Yenton primary schools in the Sutton Coldfield area of Birmingham.

The books are an invaluable support for the children, increasing their vocabulary and self-confidence.”

In expressing how pleased Year 3 pupils were to receive the books, Natalie Harris, Deputy Head Teacher at Walmley Junior School commented: “Every year the Wylde Green Rotary Club does something special for our pupils when they donate dictionaries.

“The books are an invaluable support for the children, increasing their vocabulary and self-confidence. The dictionaries also promote a love of learning.

“We must also thank the Aviva Community Fund for their financial support with this project.”

The Rotary club’s Youth Chairman, Arthur Law, added: “It’s really good to know that the dictionaries will be used to help the pupils with their lessons at school.

“We want to support young people as we know they will be our leaders of the future.”

Joining your local Rotary clubs gives you the platform to make a difference through volunteering.