Smokey the cat is the main character in a new book written and illustrated by Rotarians from Hampshire to raise money for young carers.

Rotarians Diana Brooks and Allen Cobbold have teamed up to create a children’s book which they hope will help fund days out for young carers.

“A Cat Called Smokey” was inspired by Diana’s youngest granddaughter, Juno, who was aged just six-years-old.

“Juno sent me a small parcel marked ‘fragile’,” explained Diana, who is a member of Winchester Rotary.

“I took gently, from the tissue-laden box, a small model and held in my palm what I thought to be a cat, made lovingly by small, young hands. Fortunately, Juno’s mother confirmed my thoughts!

“This was no ordinary cat. It was black, with a long, upright tail, bright yellow ‘stickie out’ eyes and only three legs, all in a straight row.

“Unfortunately, the middle leg was shorter than the other two, creating a problem when the poor creature tried to stand up. It fell down quite a lot. I realised that I had a disabled cat on my hands – and hereby hangs the story.” 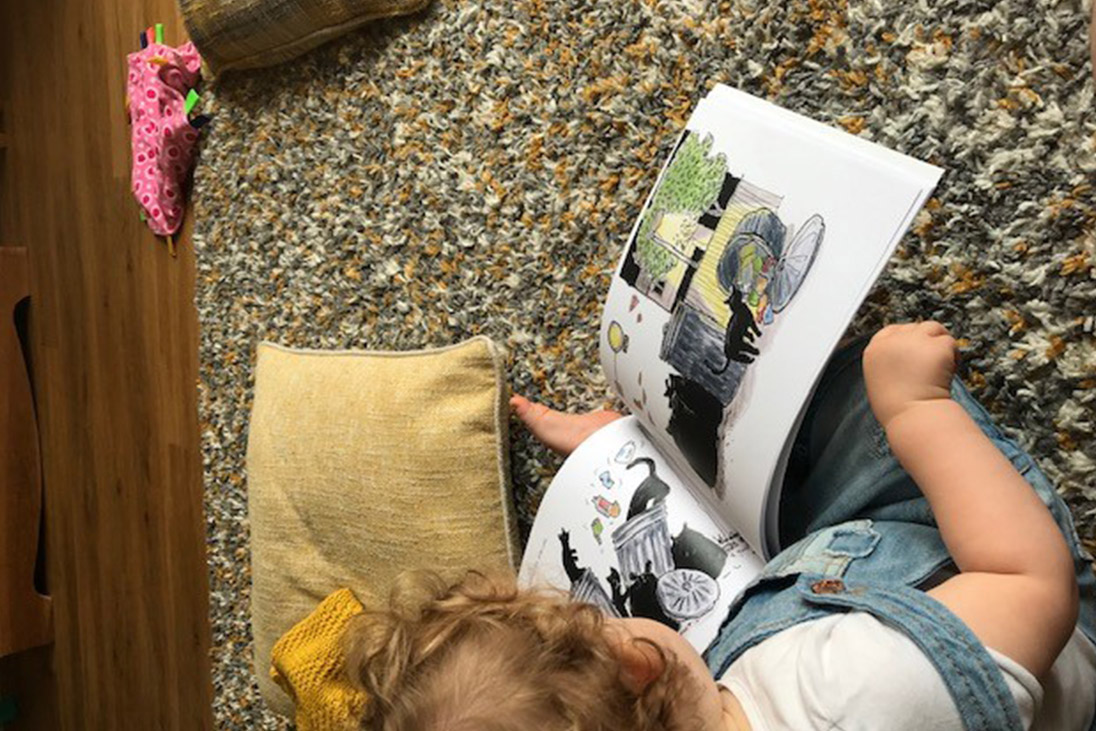 The story’s two main characters are called Smokey and Tortilla, and the book has been illustrated by fellow Rotarian, Allen Cobbold, who works under the name of Allen Edwards. He moved to Winchester from Kingston Rotary.

“It turned out that we had each bought a house on the new Kevin McCloud estate in Kings Worthy,” added Diana. “We live about two minutes away from each other.

“Allen is a graduate of Hornsby College of Art. He showed me some of his work and I asked him if he would be willing to do the artwork for my book.

“He agreed and we had a lot of fun choosing what he would draw – no computer-generated images, all the illustrations are hand-drawn.”

The book, which took six months to pull together, is now on sale and early reaction from readers has been encouraging. “Many parents have said to me that they have enjoyed reading it to their children,” explained Diana.

“Some children will read it for themselves and others will be read to, either on their own or as a group. I always read my work many times and, if it does not flow easily, I know I must make changes.

“Also, there is a moral in the story which I think children and parents will appreciate.”

What most of us when we were young took for granted; our freedom, time to make friendships, schooling, further education – these are lost or limited for many young carers.”

Money raised from the sale of the book will go to the young carers to take them out for the day.

Diana added: “I watched a short video about the young carers, an amazing group of young people, and at once I wanted to help Mike raise funds for these selfless, courageous and often forgotten group.

“What most of us when we were young took for granted; our freedom, time to make friendships, schooling, further education – these are lost or limited for many young carers.

“Some are taking care of one or more parents, siblings or a relative.

“The money we raise will go toward a really enjoyable, fun day out.”

The cost of each book is £7, without postage. A tenner would cover costs and make a good contribution to the charity.

Joining your local Rotary clubs gives you the platform to make a difference through volunteering.