In this round-up we see clubs supporting special causes, colourful pumpkins and teaching young people how to be safe with fireworks while they get competitive.

Rotary of Sovereign Harbour, South England have been busy selling pumpkins in aid of Eastbourne care for the carers and Eastbourne RNLI; local lifeboats.

The club members have been present at the Sovereign Harbour Waterfront during the day, from October 25th until October 29th.

Painted pumpkins, as well as plain ones, were sold in aid of the two charities. Painted designs included Dory from Nemo, Iced pumpkins, and BB8 from Star Wars.

The colourful pumpkins and dedication of Rotarians caused a real stir. The team were busy with all members of the community, big and small, helping the cause.

The Rotary Club of St. Ives put Cambridgeshire’s minds to the test with a county-wide quiz,  44 pubs and clubs entered raising over £2,600.

Teams competed for the top prize; the top team trophy.

On the night, The Three Horseshoes at Houghton came out on top with 191 points out of 195. The win included a £250 prize that was to be split between their chosen charities.

The event had a staggering 600 people taking part this year as members of the teams.

£950 of the raised total has been gifted directly to the eleven teams chosen by charities, the remaining amount was given to the Rotary clubs charity account to be donated to various causes throughout the year.

Speaking to The Hunts Post, a Rotary spokesperson said: “Both the pub industry and the charitable sector have been hit hard by the epidemic, so it was particularly pleasing to have such a great response from the pubs, clubs and individuals that participated. 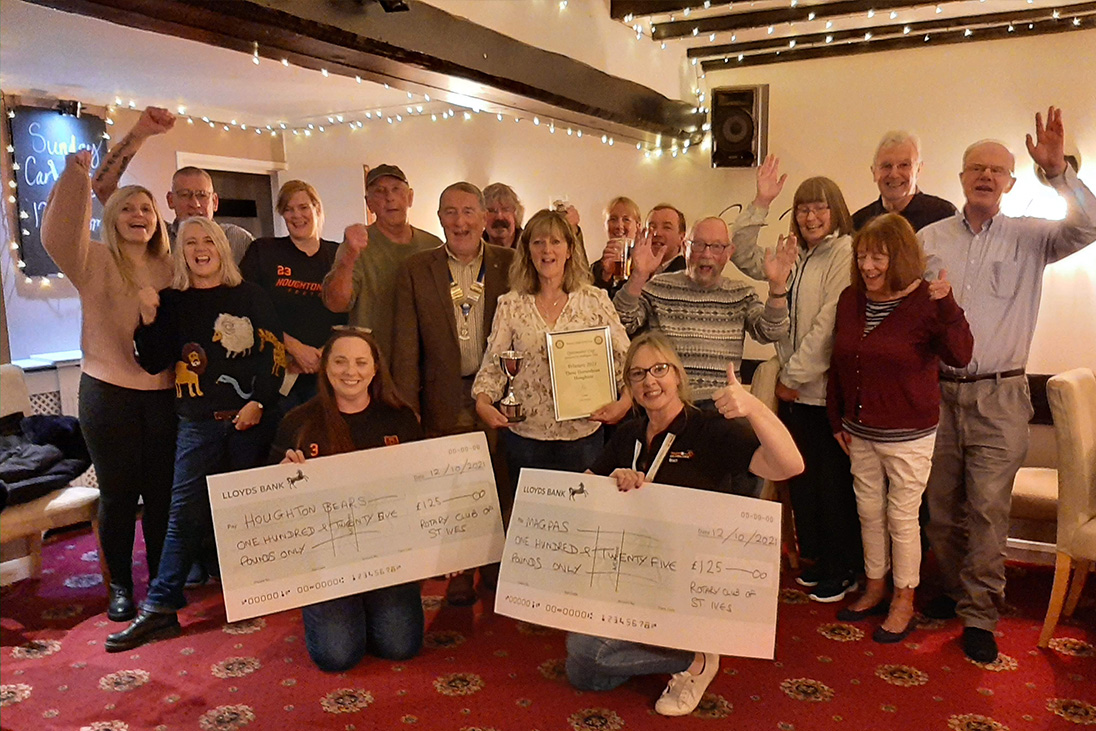 The Three Horseshoes- Winners of the Pub Quiz

In a history-making move for the club, The Rotary Club of Wetherby Wharfedale’s current and future president will support the same charitable cause in Martin House Children’s Hospice.

Over the next two years, the club will be hosting various fundraising events to raise money for the hospice that takes care of over 420 babies with life-limiting conditions, starting with their Sweepstakes 2021 event due to be held at Collingham Village Hall on Friday, November 12.

“Never before have we supported the same charity in back-to-back years and this announcement just goes to show how inspired we’ve all been by the care and support provided by the hospice during the pandemic.”

As Bonfire Night draws closer, The Rotary Club of Bath held its long-running fire safety poster competition and, despite the COVID-19 pandemic, received entries from over 2,500 primary school children.

The competition has been held by the club, along with the Bath Building Society, for over 40 years and this year’s entrants did not disappoint.

Five children were selected as winners and were congratulated at a special ceremony hosted by the Mayor of Bath, Councillor June Player.

Speaking to the Bath Echo, Bath Rotary President Simon Spalding said: “When you compare the figures for fireworks accidents per head of Bath and Bristol, it is interesting that Bath’s figures are lower.

“Decades of engaging children with a firework safety message, in a fun and creative way, must be at least part of the reason.”

For more information, check out their social media.

Many thanks to sponsors @BathBuildingSoc and congratulations to the winners for their excellent Fireworks Safety posters. https://t.co/C4a3OLFMMw

York Vikings Rotary has been providing meals for the homeless throughout the pandemic.

Supporting a local business, Hoping York Street Kitchen, in their work the two entities have been hard at work to feed the local homeless.

When the club first found out about the kitchens work, in 2020, they were immediately touched by the circumstances of the people.

The club provided a donation as part of the ‘Rotary4foodbanks’ scheme to support the cause as well as physical support.

Mick Fox, the club president has stated that the club wants to help the homeless as well as Hoping York Street Kitchen.

Mr Fox said “We are committed to providing support for local charities and worthy causes. We have seen first-hand the commitment and compassion that the Hoping York team shows and were unanimous in our decision to provide financial support again this year.

“We know every penny we give will go straight to providing quality and nourishing meals where and when they are needed.”