To mark World Polio Day 2019, millions of Rotary members, campaigners, vaccinators and supporters shared their enthusiasm to eradicate polio on social media. These are some of the highlights.

Since pioneering the campaign to End Polio Now over 30 years ago, Rotary has reduced polio cases by 99.9% worldwide, but we won’t stop until we reach the end. Keen supporters, volunteers, vaccinators and Rotary members have connected with one another on social media. Here are some of the highlights.

This year, Rotary International changed the global update stream to suit the variety of timezones where Rotary members, volunteers and polio supporters would be tuning in from. Instead of streaming live, the footage was aired from Evanston numerous times so that more people had a chance to connect on #WorldPolioDay.

Thousands tuned in for the 6pm Great Britain and Ireland stream, but you can catch up by watching the video below.

A crucial partner for total polio eradication. The Bill & Melinda Gates Foundation donate 2:1 for every donation made by Rotary towards the total vaccination process.

Dr Jay Wenger (@jay_wenger), Director of the Polio Programme at the @gatesfoundation has used #WorldPolioDay to send a message of gratitude and collaboration to @Rotary members in Great Britain and Ireland, and around the world.https://t.co/eqaXrgi38k#EndPolio

As long as polio exists anywhere, it’s a threat to children everywhere. This is what we’re doing to #EndPolio for good. #VaccinesWork https://t.co/obOjRrGSDL

Good Morning Fellow Twitterers,
Wishing good weather and every success to all who are planting crocus bulbs in aid of #Purple4Polio to help #EndPolio #EndPolioNow for #WorldPolioDay #worldpolioday2019 pic.twitter.com/xT3N4t3zQ8

Buildings all over the world were lit in colours representing Rotary’s campaign to end polio. In Great Britain and Ireland, the main focus was flooding towns in a sea of purple, representing the #Purple4Polio campaign. Purple is the colour of dye used to indicate that a child has safely been vaccinated.

Two Midlands-based Rotary clubs organised the illumination of Library of Birmingham in the city centre. Volunteers gathered at dusk to inform the public about polio, and Rotary’s campaign to eradicate it. 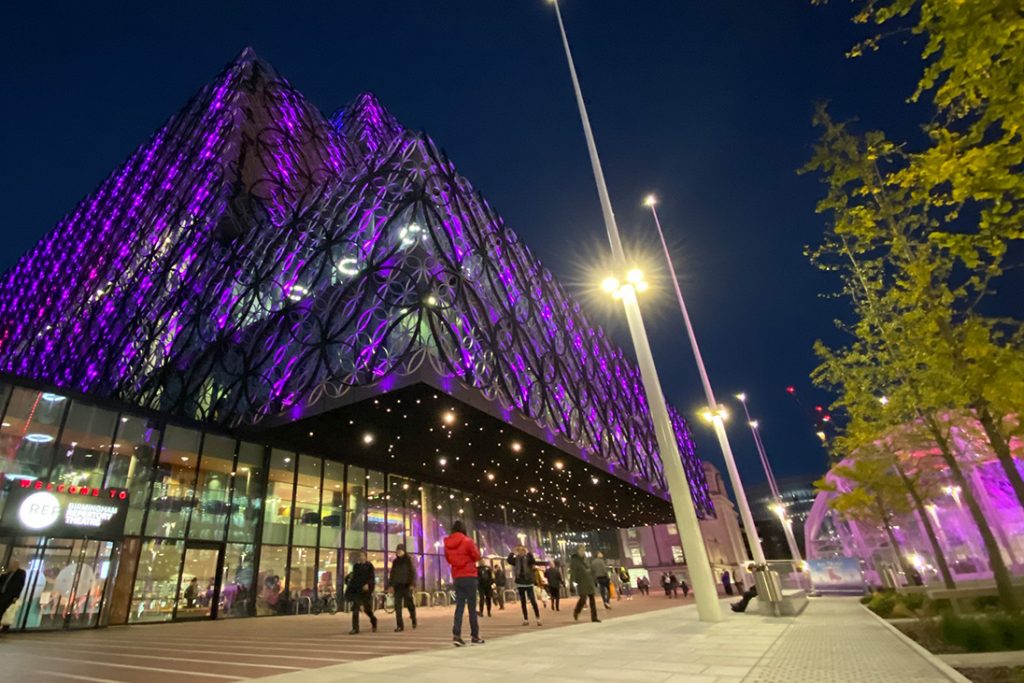 Lytham Rotary members lit nearby windmill in purple light as well as celebrating the first birthday of Passionately Purple Gin. Nearly £7,000 has been raised from the 1,180 bottles purchased over the year. Thanks to the Bill & Melinda Gates Foundation, this figure has been tripled to £21,000. 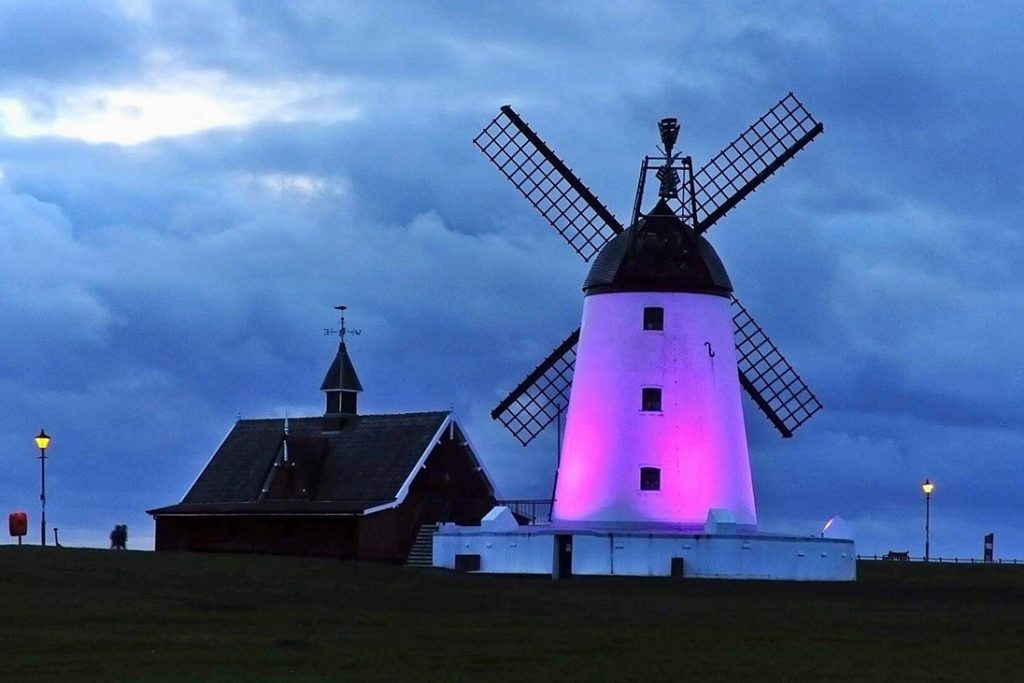 Mersey Gateway Bridge is a toll bridge up north, which was lit in purple last night in time with World Polio Day.

Members in Leicestershire lit various pinpoints of the community in purple to raise awareness of Rotary’s campaign to eradicate polio.

Great to attend the ‘African Night’ themed evening in aid of #WorldPolioDay yesterday in @leedscornex organised by @RotaryLeedsWR.

If you were in #Gravesend last night and wondered why the Clock Tower was illuminated purple it is because the Rotary Club of Gravesend @RotarySE1120 @endpolionow celebrated #WorldPolioDay; a Rotary Programme to eliminate Polio world wide #endpolio pic.twitter.com/ZV5luKpLC7

The 1,240 Challenge is a new initiative for Rotary clubs in Great Britain and Ireland to get involved with. Its name was inspired by the length of the border between the remaining two polio-endemic countries, Pakistan and Afghanistan.

Over in Wales, Rotary members were keen to incorporate the new activity into their World Polio Day activities.

#Cadets attended Cardiff Castle with @Rotary1150 & @DonnalWallbank to launch the 1240 Get Moving to end Polio project. Castle was lit up in project purple and Cadets learned all about the disease. Thank you to all for the invitation. #EndPolioNow pic.twitter.com/bVxxNWecbx

Lighting up for World Polio Day in #Narberth. #Purple4Polio #EndPolioNow #raisingawareness with the @gatesfoundation for the #eradication of polio worldwide. The Launch of 1240 Challenge, Purple Own Clothes Day for Rotakids all for the @EndofPolio pic.twitter.com/5Er9a8HKab

Every year, Rotary clubs across Great Britain and Ireland plant purple crocus corms under the #Purple4Polio initiative, which flower the following spring.

The purple crocus has become a recognised symbol of polio due to its colour matching the pinkie of a child who has received its vaccination against the disease.

This year (approximately) 2,440,000 crocus corms were sold to Rotary members across Great Britain and Ireland.

Despite the rain, Redditch Kingfisher Rotary brought the community together on Sunday 13th October 2019 with a mass crocus corm plant. 12,000 bulbs were planted by 99 volunteers in under an hour.

Students from a local school were invited by Evesham Rotary members to get involved in a crocus corm planting at The Walled Gardens at Croome Court.

A group of students from @thedemontfortschool School and @prince_henrys_high, together with @eveshamrotaryclub, will be returning to The Walled Gardens at Croome on Thursday 24th October 2019 to plant 4000 crocus corms, helping to raise awareness for World Polio Day. . . There will be an opportunity for the public to see all the bulbs in bloom when the Walled Gardens at Croome Court re-open from Easter 2020. . . Purple is the colour of the dye placed on the little finger on the left hand of a child to show they have been immunised against polio, hence the name @purple4polio . . #croomewalledgardens #croome #walledgarden #planting #crocuscorms #simondemontfort #rotaryclub #purple4polio #worldpolioday2019 #worldpolioday #polio #crocusplant #crocuses #volunteers #kitchengarden #gardening #eradicatepolio #springflowers #polioawareness

We’re incredibly thankful for the awareness our Rotary Purple4Polio Ambassadors raise – including on social media!

Ade is a Rotary Purple4Polio Ambassador who contracted polio as a child, which paralysed him from walking.

He contracted polio in his birth country of Nigeria, a country which has passed the landmark goal of three years without a declared case, however, Ade is keen to eradicate polio from the world within his lifetime.

“The last few steps are always the toughest, but once we end it, once it is all over, it will all absolutely be worth it,” Ade commented.

.Please get involved and support #WorldPolioDay this October 24th! Only 2 countries left where polio is endemic. We’re getting closer to making #History and totally eradicating this terrible disease for good. #EndPolio https://t.co/l7GQQkGseC

Anne is a British Paralympic wheelchair racer who shares the passion to eradicate polio. Strike contracted the disease aged two, in home-town Kenya.

There’s one thing that will help humanity make history — and banish the disease forever: !

As the world takes its final steps to eradicate polio, Rotary clubs all over got involved in illuminating famous buildings and involving the community.

The Rotary Club of Grand Turk along with members of the Ministry of Health, the Rotaract Club of Grand Turk and members of the community took to the streets to bring awareness of the disease Polio in honor of World Polio Day. World Polio Day is celebrated on October 24 annually. World Polio Day was established by Rotary International to commemorate the birth of Jonas Salk, who led the first team to develop a vaccine against Polio. Polio is a highly infectious disease that most commonly affects children under the age of five. The virus is spread person to person, typically through contaminated water. It can attack the nervous system and in some instances lead to paralysis. Although there is no cure, there is a safe and effective vaccine – one which Rotary and its partners have used to immunize over 2.5 billion children worldwide. #EndPolioNow #Polio #GlobalHealth #PolioEradication #Rotary #RotaryFoundation #RotaryGT #RotaryLife #WorldPolioDay #October24 #ThisClose #D7020 @rotaractclubgdt