A charitable education project in South Africa has massively reduced costs thanks to an innovative partnership with a supermarket chain in the country.

In 2008, members of Rotary Northampton Becket in the Midlands were visiting Malawi and the Eastern Cape province of South Africa, reviewing a number of charitable projects.

They visited a number of primary and secondary schools, and were stunned at what they saw. Pupils were sitting on floors, there were no desks, no pens, no pencils, no books or paper, no blackboards.

Despite those disadvantages, what came across from the children was a huge appetite for learning.

Back in the UK, Becket Rotary determined that they would help in whatever way they could, and so Classroom Box was born.

Chairman David Sparrow explained: “The idea was that we would source basic educational materials and ship them out to Africa where they would be distributed by local Rotary Clubs.

“We talked with the school heads to find out was needed, raised funds and bought locally in Northampton.

The net effect is that we are now able to assist many more schoolchildren than before.”

The cost of the materials was less than the cost of shipping, but at the time, it was still cheaper than sourcing in Africa.

The first shipment was 70 boxes to schools in the Eastern Cape, with distribution was carried out by members of their partner club, Rotary Arcadia.

The contents were well received. One school wrote to the Rotary club: “You have uplifted the standards of education.”

Another wrote: “Staff and parents appreciate what you have done for us.”

Encouraged by that, Becket Rotary set about raising funds for another shipment, and a further 120 boxes were shipped to South Africa in 2009.

In 2010 the project was extended, and 200 boxes were shipped to Malawi, one of the poorest countries in the World, and distributed to rural schools by Lilongwe Rotary Club.

But since then shipping costs increased dramatically.

Ian Hill, a trustee of Classroom Box explained: “It was apparent that too much of the money being raised was being spent on freight-age.

“I had lived in South Africa for many years, and had a number of contacts there, so I was asked to see if we could source materials cheaper.

“After exploring a number of avenues, I was able to persuade Shoprite Holdings Ltd, the number one Supermarket group in South Africa, to assist.

“Shoprite very generously sell materials to us at cost price, and, in addition to that, they very generously transport them to Malawi and to the Eastern Cape free of charge, as part of their regular deliveries.

“The net effect is that we are now able to assist many more schoolchildren than before.”

He said that the number of pupils assisted was now over 100,000.

Whilst the cost of a box will vary depending on exchange rates, on average, a box will cost £20, a far cry from the £60 when transport was from the UK.

Trustee Reverend Alan Panton explained that said one massive advantage the charity enjoys is that by working with partner Rotary clubs in Africa, every penny raised goes towards buying goods and materials, with no deductions for salaries or expenses.

He said “We always keep a constant review of the contents to ensure they match current needs.

“We have dropped some of the higher price items to increase the volume of paper and pencils we can supply. We have also added items such as dictionaries, atlases and wall posters from Rotary’s Learning for Life programme.”

For the future, he said that they were looking for greater involvement from other Rotary clubs or charities as box sponsors. 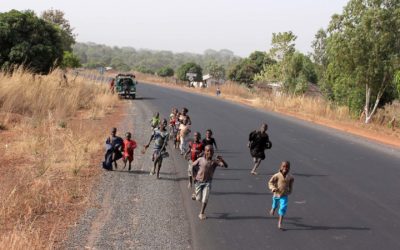 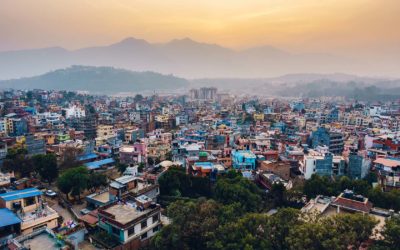 The April 2015 Nepal earthquake killed nearly 9,000 people and injured nearly 22,000. Five years on, the effects are still resonating particularly on children’s education in the more remote and regional communities which were so badly damaged.