From golf to running and cycling, the Rotary clubs down in Folkestone have been raising money through a variety of different sports events.

Over the last month down in Kent, Folkestone Rotary Club and Folkestone Channel Rotary have been engaging with their local community through a selection of different sport events.

The first of these was the 6th edition of the club’s charity golf day where 17 teams participated and raised £1,500.

On a sunny day at the Sene Valley Golf Club, the teams competed in an effort to raise money for the club’s School Uniform Project.

The winning team from the 2022 charity golf day was captained by Bob Mabberley.

The club has been working with local schools and discovered that there are many families struggling to provide their children with school uniforms as well as PE kits, shoes and coats.

Folkestone Rotary is now working with Family Liaison Officers to identify those in the area who could be supported by the money raised from the event.

Later on in the month, the club successfully held the 17th Folkestone Rotary Half Marathon which saw over 30 running club teams participating along with the popular children’s race .

Over 400 individual entrants lined up on the famous Folkestone Leas promenade to take part in the half marathon which included plenty of newcomers from as far afield as Brentford. The event also saw a variety of different age groups participating, with some as young as 17 and even one 75-year-old participant.

The event would not have been able take place without the over 70 marshals and assistants who helped run the event including Hythe, Channel, Deal & Folkestone Rotary Clubs, Nice Work, Folkestone Running Club and many local support volunteers such as the Police Cadets.

Folkestone Rotary President, Ray Johnson, commented: “The race encourages participation, assist charities, attracts visitors to our district, and promote good health and wellbeing. In addition, a good outcome is to increase the profile of sport.

“It was so nice to see so many runners and spectators chilling in such nice weather. Thanks to you all that have assisted the event once again.” 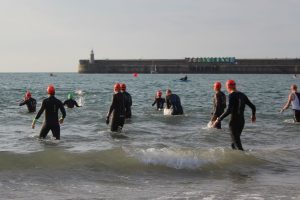 Participants setting off at the Folkestone Channel Rotary Triathlon from Sunny Sands beach.

The main event saw participants first embark on a 1500 meter swim from Sunny Sands beach followed by a 40km cycle ride through the Kent countryside and finally a 10km run along the Folkestone seafront. There was also a ‘sprint’ version where participants could do the triathlon at half the distances mentioned and this year saw the first time a Mini Triathlon was available for those who wanted to try a triathlon for the first time.

The event required substantial help nearly a hundred volunteer marshals, including a team of Kayaks from the Folkestone Rowing Club, and the efforts were clearly worth it as entrants gave incredibly positive feedback at the end of the event.

British Triathlon always have a representative at the event and their assessment report gave either Good or Excellent on all measures. One comment that stood out said: “Top marks for the sheer number of marshals and their enthusiasm, all who did a great job, which resulted in all the competitors completing their distances safely and without issues.”

The event raised an incredible £11,000, meaning that Folkestone Channel Rotary have raised over £50,000 in the last year to help those in need and hardship in the Folkestone area. 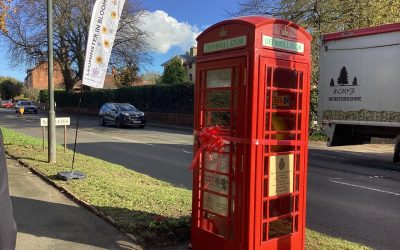