Out of disaster comes hope

Out of disaster comes hope

From the devastation of a horrific explosion in Beirut a year ago, Rotarians from across Great Britain & Ireland have helped fund the rebuilding of part of a hospital destroyed by the blast.

A small explosion, black smoke, fireworks and then the absolute terror of being caught in arguably the largest non-nuclear explosions in history.

It was August 4th, 2020 when 2,750 tonnes of ammonium nitrate stored in Hangar 12 of Beirut Port in Lebanon exploded with the force of a 3.5 magnitude earthquake. 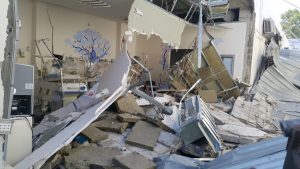 Over 200 people died, more than 6,000 people were injured when buildings and ceilings collapsed, lethal shards of glass became daggers, windows shattered and doors were blown off their hinges.

Ten firefighters burnt to death – three from one family, and 300,000 people were displaced from their homes. Damage is estimated at up to £10.6 billion.

The disaster prompted worldwide aid, including from the Rotary family. Within days, Putney Rotary from London had set up a donations page and were in contact with Habib Saba, President of Beirut Cosmopolitan Rotary.

The focal point of Rotary efforts was Karantina Public Hospital, the only public hospital in Beirut, which lay 900 metres from the epicentre of the port explosion and was severely damaged. The plan was to fund a new Mother and Child wing of the hospital. 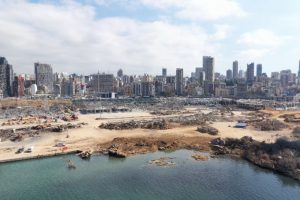 At the time, Beirut Cosmopolitan Rotary was liaising with RC Whitby Sunrise from Canada, who would become the Global Grant international sponsor, along with other clubs and districts globally. As President of Putney Rotary, our club became the cornerstone of the UK/Beirut fundraising campaign, talking to Rotarians across the UK about the project.

Putney Rotary established an avenue to donate funds, to amalgamate donations from collaborating clubs and districts, and minimise transfer fees. The target was to raise $140,000 (£99,000) from Great Britain and Ireland. The cogs of the Rotary network were turning in these isles, and across the world, as a sense of unity and collaborative spirit began to build momentum.

After the blast of August 4th, we were devastated and without any hope concerning the future of our children in Lebanon.”

Fundraising was wide and varied, including a classic car drive from John O’Groats to Land’s End organised by Hedge End Rotary from Hampshire, a Lebanese picnic and a street collection, as clubs and districts donated considerable money towards rebuilding Karantina Hospital, notably Districts 1040 (Yorkshire and North Lincolnshire) and 1130 (London), along with the Rotary clubs of London, Purley and Putney.

By St Valentine’s weekend this year, thanks to participating clubs and districts in Great Britain and Ireland, and around the world, Beirut Cosmopolitan’s initial target of approximately $400,000 was reached. The Global Grant application was locked on St Valentine’s Day. 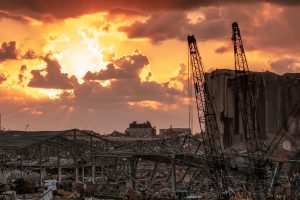 Dramatic Landscape of Ruins After Beirut Explosion. Beautiful Orange Sunset over the Rubble after a Terrible Disaster Blast in Lebanon.

A month later, The Rotary Foundation has approved the $391,000 Global Grant for Beirut’s Karantina Public Hospital.

The paediatric ward which was destroyed in the explosion has been rebuilt with the help of the Swiss Government. This will act as an interim ward until the final location for the paediatric ward in the new wing of the hospital is completed this month.

The Global Grant for medical equipment for this project was planned to be installed in time for the anniversary of the blast. Once the new paediatric ward is up and running, an interim ward will be converted into the only Governmental dialysis centre for children, in addition to being a day hospital for children with cancer in Lebanon.

Dr Robert Sacy, founder of the NGO Assameh, thanked clubs writing: “After the blast of August 4th, we were devastated and without any hope concerning the future of our children in Lebanon.

“Thanks to the international friendship, solidarity and support we were able to commence rebuilding the hospital and on 4 August 2021, exactly one year after the Beirut Port Explosion, the Mother and Child wing of the hospital will be launched.” 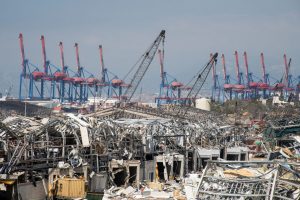 Speaking to clubs in Rotary GB&I, Habib Saba said: “Despite the dire circumstances in Lebanon – with a political, economic and financial meltdown, capital control, a severe devaluation of the Lebanese pound, spiralling inflation, more than half the population living below the poverty line, and to add insult to injury the August 4th Beirut Port Explosion which shook the nation – the silver lining has been the outpouring of support and comfort from around the world and specifically the global Rotary family.

“With the benefit of technology and, in particular Zoom, we have entered each other’s homes and hearts, breaking down barriers and misperceptions and drawing ever closer to each other all in the midst of a rampant Covid pandemic, and all the while with grace, humour and good spirit.

“It is indeed a testament to the values, power and unity of the Rotary family worldwide.” 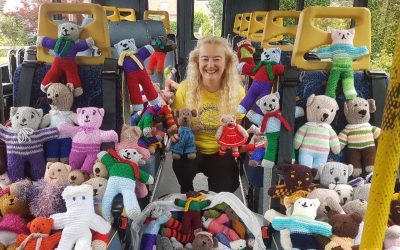