Rotary has a number of celebrity ambassadors supporting Purple4Polio, many of whom know the trauma of the disease well.

We are extremely fortunate to have a number of celebrity Purple4Polio Ambassadors supporting our campaign and Rotary’s efforts to rid the world of polio, and so many of them know about the impact the disease can have all too well.

Paralympian and broadcaster Ade, has pledged to support Rotary “all the way” as we continue our efforts to rid the world of this life threatening and crippling disease. Ade has been on our screens throughout the last few years after presenting Channel 4’s coverage of the Paralympic Games in Rio and joining Pudsey Bear on by hosting BBC Children in Need. Ade contracted polio in his birth country of Nigeria, a country which has had a recent setback and is on the polio endemic country list again alongside Afghanistan and Pakistan.

Speaking to Rotary magazine Ade commented: “Rotary always does a lot of good work on polio you are one of the leading charities on polio if not the leading charity.” Referring to the recent cases in Nigeria, Ade added “All the agencies must have a blueprint on how to tackle the Nigeria issue. The last mile is always the toughest.”

Polio is a cause close to film Producer Jonathan Cavendish’s heart. His father, Robin, contracted polio in Kenya in the 1950s, just before he was born. Robin, with the strength and support of his wife Diana, Jonathan’s mother, refused to let polio stop him from living life to the full.Their inspiring story was brought to life in the film Breathe, which Jonathan produced and jokingly has dubbed “probably the most expensive home movie ever made”.

On taking up the role, Jonathan commented: “I am pleased to be able to help publicise the great work done by Rotary and the Purple4Polio campaign. The world must remain vigilant in ensuring that this horrifying disease is finally and totally eradicated.”

Read the extended interview with Jonathan in Rotary magazine.

Robin founded the charity CS Disabled Holidays (formerly The Cavendish Spencer Trust), the union of two charities, Refresh and the Robin Cavendish Memorial Fund. These two charities shared similar aims in helping to provide holidays and respite breaks for people with severe disability due to neurological or neuromuscular disorders. Jonathan is a proud Trustee.

In 2009 Konnie, a keen supporter of Rotary went to India, along some of our own Rotarians, to make a public awareness and schools’ educational film about the Rotary End Polio Now campaign. 67 million children under the age of five were vaccinated against polio in just two days. Konnie Huq is best known for presenting Blue Peter for ten years until 2007. Since then she has interviewed leading stars of music and film as well as former prime ministers, Tony Blair and Gordon Brown. Music is her passion and she feels lucky to have had the opportunity to present Top of the Pops for BBC1 and The Tube for Channel 4 Radio.

Her versatile presenting style enables her to lend her experience to a wide range of topics, from covering New York and London fashion weeks for ITV to presenting major sporting and fashion programmes.

Author, television presenter and polio survivor Julia contracted polio as a toddler and spent five months quarantined in hospital before she was discharged on Christmas Eve 1957. Despite having her left leg in a calliper, Julia’s parents were keen to ensure she would be able to walk unaided so took her to weekly physiotherapy and swimming sessions and, at the age of three, she began ballet classes. At school her creative flair came to the fore and although she had severely weakened muscles from the waist down on her left side, caused by contracting the virus, she did not let this prevent her from taking part in a number of drama and dance festivals, before travelling the country and the world as a professional dancer.

Julia has gone on to be a successful author, publishing her memoirs One Hundred Lengths of the Pool in 2011 as well as the Liberty Sands trilogy of novels. Julia has also been a regular on Britain’s television screens and was part of the launch of QVC in 1993 where she still works today.

Born in Kenya, Anne contracted polio when she was just two and a half years old, but like so many inspiring survivors of the virus, she did not let it hold her back. After obtaining a Bachelor of Education degree in her native Kenya she moved to Britain in 2000 before taking up wheelchair racing in 2002.

A testament to her talent and determination, just two years later Anne became the first wheelchair racer from Sub-Sahara Africa to compete at the Paralympics when she represented Kenya in the T53 400m, 800m and 1500m races at the Athens Games.

We were delighted to announce Alan Titchmarsh as an ambassador as part of our World Polio Day celebrations.As one of the nation’s best loved gardeners, after starring on programmes such as Gardener’s World and Ground Force, Alan was particularly interested in one element of the campaign: “I am delighted to be able to support the Purple4Polio campaign developed by Rotary International in Great Britain and Ireland.”

“The campaign, which members of Rotary clubs across the UK will plant in excess of seven million crocus corms during October and November that will bloom in late February and early March, is very innovative and clearly shows that members of the Rotary organisation bring colour into people’s lives through all its activities.”

Tarrant, best known as the host of game show Who Wants to Be a Millionaire? was also excited to get on board with Rotary’s latest initiative: “I am delighted to support Rotary International in Great Britain and Ireland in their 100th year of fundraising through the Rotary Foundation.”

“This campaign, which begins in October with a vast colour expanse in late February/early March, I am hopeful will focus people’s attention on polio, which is a debilitating disease and which Rotary across the world has been fighting to eradicate for the past 30 years. With so few new cases, it clearly is very important that the fight goes on.”

“I wish you all the very best and look forward to seeing the ‘blooming crocuses’ in both my local area and across the country.” 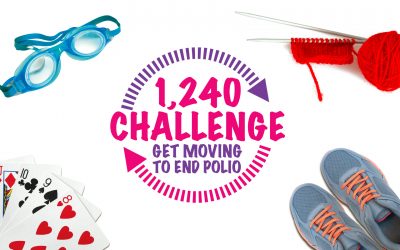 Get Moving to End Polio
This Purple4Polio sponsored activity is inspired by the length of the border between the remaining two polio-endemic countries. 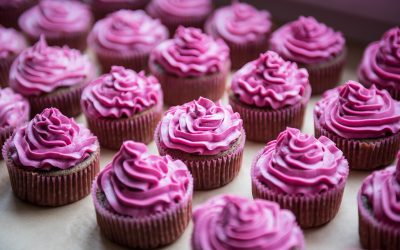 Fill Your Plate for Polio
You're invited to get involved in Rotary's meal with a difference. 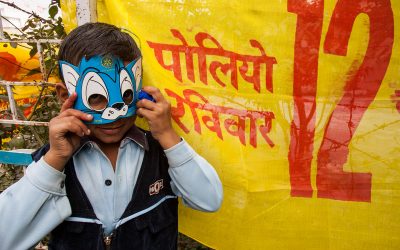