The Marine Conservation Society (MCS) is the UK’s leading charity for the protection of our seas, shores and wildlife. Working in conjunction with the MCS, North Wales Rotarians were involved in a major beach clean.

The weather was kind for volunteers from Llandudno Rotary when they took part in a beach clean.

The North Wales resort is a haven for tourists each year, drawn by the town’s Victorian and Edwardian elegance and splendour.

Fifty volunteers, including six from the Llandudno Rotary, took part in a beach clean, led by Patricia Stone.

She reported that in just one hour, a co-ordinator from the MCS weighted 61kgs of rubbish, packed into 31 big council bags, which had been picked up from the North Shore – Llandudno’s principal beach. 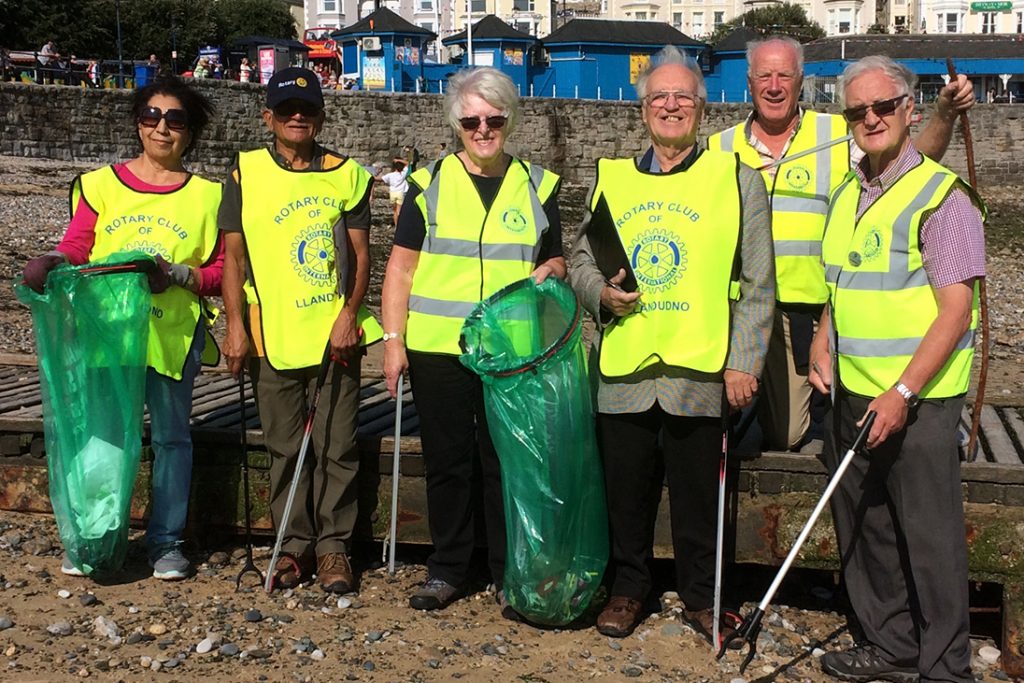 Rotary members and friends gathered for the beach clean

With a long Victorian pier and a wide promenade, and set in the shadow of the Great Orme headland, the volunteers worked hard to make one of Britain’s favourite beaches cleaner.

Patricia Stone said: “Several volunteers said that ours was one of the cleanest beaches that they had worked on, but there were still a great amount of cigarette stubs lying under where the seats are, as well as wet wipes.

“Thanks to the people on this site who came to help with registration and handing out the litter pickers, high visibility jackets and surveys.”

The Rotary Club of Llandudno, and its sister club, Llandudno Gogarth, have 22 members, plus honorary and affiliated members.”

Volunteers are planning to hold regular beach cleans in the town on the fourth Tuesday of every month, meeting beside the Lilley Hotel at the West Shore at 11am. There is also a monthly collection of beach waste at the West Shore.

Equipment is provided, but volunteers are advised to dress sensibly, especially with footwear.

The Rotary Club of Llandudno, and its sister club, Llandudno Gogarth, have 22 members, plus honorary and affiliated members. Llandudno Rotary was founded in 1927, the Gogarth club in 2018.

Together, we lead change in our own communities and around the world.