The app has been designed for Android and Apple users and is available in English and Gaelic.

It has been targeted towards for local people, as well as tourists, and will guide the user around 32 of the most historic sites in the city of Inverness.

When opened, the app will guide the user to the first site, Inverness Castle, and on arrival will relate the story of the Castle.

A local app developer was identified and the project costed before fund-raising was undertaken.”

If the user is hearing impaired then there is an option to read the story, as it appears on the screen, instead of listening to it.

On completion of the history of the site, the user is then guided to the next site, where the story of it is told before being guided on to the following site.

This process is repeated through all 32 sites of the walk.

Each site story is designed to highlight the history of the building and what part it plays in the heritage of the city, including those buildings which were funded with money raised through the slave trade in Guiana, which the Highlands had a strong connection with. 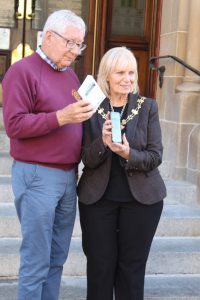 The app has been targeted towards for local people as well as tourists.

The app took about eight months to develop. First of all, the sites were identified and then a suitable route round the sites was drawn up.

This was followed by the writing of the history of each site and then the translation of each story into Gaelic. Then the audio, in English and Gaelic was undertaken using a male and female voice, in each language.

This funding included money for the printing of a booklet about the Historic Walk which can be used as a memento of the experience, or just as a stand-alone book for reading.

The app took about eight months to develop. First of all, the sites were identified and then a suitable route round the sites was drawn up.”

In order to overcome future printing costs, the booklet is self-funding through sales and advertising and so can be replaced in the future at no cost to the Rotary club. The booklet highlights the four Inverness Rotary clubs and provides links to their Facebook and website pages.

The launch received good coverage in the local media and was an excellent opportunity to promote Rotary in action.