Harrogate Rotary in North Yorkshire celebrated its centenary last year, but saw its plans to mark the occasion thwarted by Covid.

However, the club did manage to persuade Harrogate Borough Council to dedicate a flower bed in the town’s Valley Gardens, which was officially dedicated in the presence of the Mayor, Trevor Chapman, and District Governor, Stephen Ellis, at the start of the Rotary year last month. 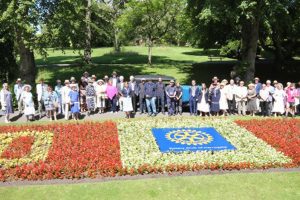 The club has always paid a great deal of attention to the environment, having planted many thousands of trees, crocuses and daffodils in the area.

Outgoing President Alistair Ratcliffe has worked tirelessly to ensure that the centenary bed does credit to the achievements of the club particularly in what was one of the most challenging years for every club president.

The event was hosted by incoming President John Fordyce accompanied by club members dressed in 1920 attire, alongside a 1920 Rolls Royce kindly lent especially for the occasion.

The event was hosted by incoming President John Fordyce accompanied by club members and their wives dressed in 1920 attire, alongside a 1920 Rolls Royce kindly lent especially for the occasion. 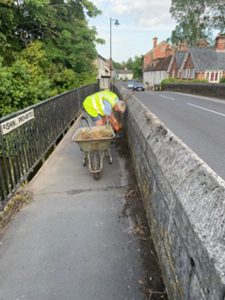 Members of Fordingbridge Rotary tidying up the town

Members of Fordingbridge Rotary on the Hampshire/Dorset border were becoming concerned at the untidy and unkempt look that greets visitors to the town on the edge of the New Forest.

So the club took matters into their own hands with a tidy up of the town, starting with the bridge, the High Street and Salisbury Street on two Thursday evenings.

The initiative prompted a flurry of supportive social media messages, and positive comments from passers-by, one of whom presented the team with a box of chocolates!

The Cricket Society Trust and Stamford Burghley Rotary in Lincolnshire sponsored a cricketing day out for students of Park House School Thorney.

This was our first event out of school since Covid. Cricket is a team game which has enabled us all to bond together.”

Park House is a specialist therapeutic school, and the youngsters, along with teachers and key workers, took part in a cricket festival with the co-operation of Uffington Park Cricket Club. 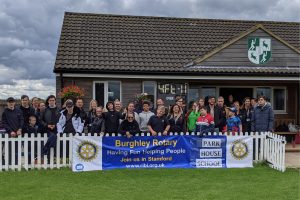 Adam Sampson, a key worker at the school, observed: “This was our first event out of school since Covid. Cricket is a team game which has enabled us all to bond together.”

Steve Alan from Stamford Burghley Rotary added: “To put on such a wonderful fun game, with so much enjoyment, makes all the hard work worthwhile.”

July and the new Rotary year marked Presidential handovers at a number of clubs. In Surrey, the district of Mole Valley has welcomed four new Rotary Presidents.

Together with a combined membership of over 100 Rotarians from across the Mole Valley area, Jonathan Bickerdike (Ashtead Rotary), Andrew Smith (Bookham & Horsley Rotary), Elaine Edgar (Dorking Rotary) and Pieter van Brakel (Leatherhead Rotary) are eager to get back to their numerous community and fundraising activities as soon as the current coronavirus restrictions permit. 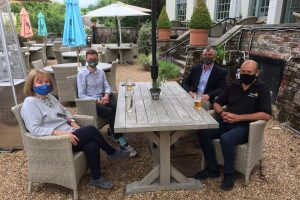 In a normal year, the four clubs, between them, would raise on average almost £100,000 each year, the majority of which is used to support a wide range of local, national and international charities and other voluntary organisations.

Charities already chosen for support over the coming 12 months include the Queen Elizabeth Foundation, Princess Alice Hospice and Surrey Young Carers, together with a number of other charities who have been particularly impacted by the recent pandemic.

As well as raising money themselves, many Mole Valley Rotary projects involve the four clubs and their members organising events, which enable other local charities and organisations to raise awareness of, and funds for, their own activities.

These range from the ever popular Ashtead Rotary Village Day, set to return in 2022 after an enforced two-year break, to a number of sponsored events, including a 10k run across Headley Heath, a cycling challenge through the Surrey Hills, a ‘Rotawalk’ 4-mile walk around Holmwood Common and a ‘swimathon at Dorking Sports Centre, all enabling participants to raise funds for their own preferred charities.