Running the extra mile for a good cause in Folkestone

Running the extra mile for a good cause in Folkestone

Over 360 runners braved the Folkestone Rotary Half Marathon in support of various local and international charities.

As perfect weather lit up the famous Folkestone Leas promenade, participants were lined up for the 16th edition of the Folkestone Rotary Half Marathon.

After the popular children’s race, participants as young as 17 and as old as 82 could be seen running across the gorgeous coastline.

It is a fantastic achievement for the runners to complete the course either as an elite runner or a new participant.”

In the end, James Turner of the Brighton and Hove Athletics Club and Amy Simpson of the Dover Road Runners Club seized victory in the individual male and female categories and Folkestone locals had reason to celebrate as the Folkestone Running Club won both male and female team categories.

James and Amy both won £100 each but everyone who took part in the marathon got a medal as a reward for their determination to raise money for a good cause. 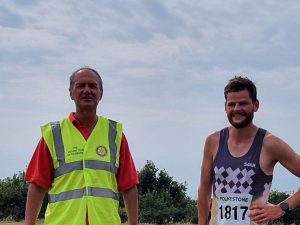 Everyone attending the event was in high spirits and participants had the help of over 80 marshals during the event. These marshals and assistants included Hythe, Channel, Deal & Folkestone Rotary Clubs, Nice Work, Folkestone Running Club and many local support volunteers including the Police Cadets.

Club President Kate McNeice commented: “It is a fantastic achievement for the runners to complete the course either as an elite runner or a new participant to a half marathon’s 13.1 miles, no mean feat.

“The objectives of the race are to encourage participation, assist charities, visit our district, and promote good health, as well as increase the profile of sport and I am particularly delighted that there was such a good turnout during these challenging times. 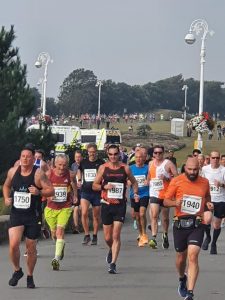 Over 360 runners covered approximately 4,420 miles between them over the course of the half marathon.

“Thanks to you all that have made the event such a success once again. This year we support The Folkestone Rotary Clubs giving where we support many local charities which will assist them greatly.”

Folkestone Rotary organised this event to raise money for local and international charities which are achieved mostly by the participants seeking individual sponsorship.

This year many generous sponsors who made the event possible included The Roger De Haan Charitable Trust, McDonald’s and Folkestone & Hythe District Council.

Ray Johnson, a keen runner and Public Relations Officer for the club, said of the event: “Once again, we have received tremendous feedback from the runners congratulating us for such a great event, by way of organisation, encouragement from marshals and most importantly holding the event safely.”