Gareth Cheesman from Rotary Llantwit Major in South Wales has enjoyed close ties with the Philippines since visiting the country as a Group Study Exchange team leader in 2012. When a devastating typhoon decimated the south-east Asian country a year later, Gareth was at the forefront of a Rotary project to help fishermen who had lost their boats in the storm. Here he tells the story.

Imagine trying to survive typhoon winds hitting 150mph. Because that was the plight which faced millions of Filipinos whose homes stood in the way of the Super Typhoon Haiyan.

Known locally as Typhoon Yolanda, this vicious storm killed at least 6,300 people, destroying a million homes and affecting 11 million people. This tropical cyclone was the strongest ever recorded.

Rotary’s forte is responding swiftly to these devastating natural disasters, and clubs across the globe joined forces in 2013 after Haiyan had wreaked its havoc.

“The Rotary project is most beneficial to my family.  We’ve waited for long to recover our means of livelihood. Typhoon Yolanda took away everything nearly six years ago.  It’s only now that we are able to go fishing daily again because of the Rotary project.  Now I have a source to buy our basic needs, particularly our staple food, rice, and to give my grandchild a school allowance.”

Fisherman Eddie Demavivas, married, with two children and one grandchild

For Rotarians in South Wales, they share a close affinity with the Philippines through a reciprocal Group Study Exchange in the region of Western Visayas, which bore the brunt of Haiyan.

Clubs within South Wales, along with Inner Wheel and Rotaract, managed to raise around $100,000 once District and Rotary Foundation multipliers were taken into account.

And working closely with Rotarians in the Philippines, they identified a small community which had lost much of its livelihood when fishing boats were destroyed in the typhoon.

Santa Rita is about two hours’ drive from Panay island’s capital city, Iloilo. It is a community of around 300 households, many of whose homes were damaged.

“The Anilao Fishing Project of Rotary has given hope to us, as we try to be back on our feet again after the super typhoon. Now we are assured that we will have our basic family maintenance needs – rice, coffee, sugar, soap, cooking oil, etc. We can also buy the school supplies of our children and grandchildren. We are very thankful to Rotary.”

Melinda Calzado, married, with five children and two grandchildren living with them

Most families were engaged in small-scale fishing close to the shore, providing food and some cash from sales of surplus catch which was sold in a nearby community market. Super Typhoon Haiyan had put paid to that.

So the Rotarians decided to fund fishing boats, motors and sets of nets to around 50 families – about 17% of the community. Their plans also included reviving the co-operative, which would own the boats, and make sufficient profit to repair or replace boats and equipment. This could possibly increase the number of vessels, and also provide some financial bursaries for children to attend school.

Rotary Iloilo became the project host and, using local contacts, partnered with the University of San Agustin which was instrumental in providing business expertise and training for the project.

“The Rotary project is a big help to us.  If we can go out to sea, our catch brings food to our tables, and gives us money to buy our household needs. Through the trainings we undertook, we have learned how to make our livelihood sustainable as a community so that we don’t only work for today, but for the coming years. The Rotary project has empowered us to secure the future of our children and even of our grandchildren. Thank you Rotary.”

Fisherman’s wife Erma Salderon, who is also a Barangay councillor

Both the Municipal Government of Anilao and the Philippines’ Bureau of Fisheries and Aquatic Resources assisted and advised throughout.

And so, last November, the project’s dreams came to fruition, when the 55 fishing boats were blessed by a local chaplain, and a few weeks later, there was an official handover of the boats to the Santa Rita Fisherfolks’ Association, featuring Rotarians from both the Philippines and South Wales. 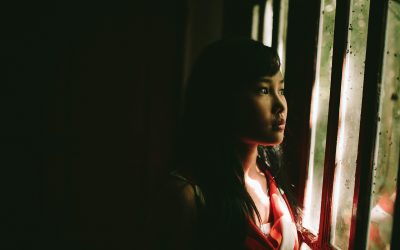