John and Chris Philip initiated a project in Tanzania providing schools with the knowledge and resources so breakfast could kick start the day, three times a week. With the help of local teachers, their dream is proving a reality.

Two Newbury Rotarians have returned from Tanzania having promised seven primary schools that pupils will receive breakfast at school three times a week.

The schools are on the Lake Victoria island of Ukerewe, accessible only by a three-and-a-half-hour ferry journey from the mainland town of Mwanza.

The island’s 350,000 population are subsistence farmers and fishermen who live on the edge of poverty. Most schoolchildren walk long distances to school on an empty stomach, lucky to get something to eat when they get home after school.

Three years ago, with the help of local farmers, John and Chris Philip initiated a Rotary project to establish environmental clubs in three schools, each with membership of 30 students.

The project’s general aim was to inspire and empower children to be engaged in preserving and protecting their environment, as well as benefitting from it as future farmers.

Following training, the pupils were given farming tools, watering cans, fertilisers, pesticides and a variety of seeds including maize, sorghum, egg plants, Chinese cabbage and Amaranthus.

With their teachers, they worked outside school time to transform many unused sections of the school compounds into thriving farms.

The first harvest was used to provide food for the entire school. The second harvest was used for the same with some produce sold to generate funds to buy pencils, rubber, paper and toilet soap – it also helped them to buy bags of sugar.

Each school also managed to establish a tree nursery – the total trees planted exceeded 35,000, which included many fruit trees.

Training was later extended to teachers and parents. They were trained on agroforestry practices, use of green and farm yard manure, planting of cover crops, crop rotation, and use of liquid manure and mulching.

John and Chris have visited the schools before, but on this occasion were invited to share breakfast at one of the schools. Porridge was prepared on open wood fire under a tree by the pupils and at break time they queued up with 1,400 pupils receiving a mug of porridge.

John said: “This was the best breakfast ever for me. To share a mug of porridge with those children, who but for Rotary’s commitment, would have had nothing to eat. It was a humbling experience.”

Their plans are to reach out to four more schools – making seven in total. The total cost for two years until it becomes sustainable is £16,830. 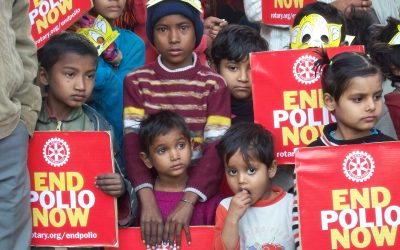