Mark Esho was disabled with polio from the neck down aged just five-years-old and told he would never walk again. Although he partially recovered, he had to battle against an abusive father, plus discrimination as a black and disabled person. His autobiography, ‘I Can, I Will’, has already received rave reviews.

Picture the scene. It’s midnight, and nine-year-old Mark Esho is woken by his father and driven to the forest. The frightened youngster was carried along a darkened track, with the sound of wild animal noises filling the darkness of the night.

When they reached a hut with a thatched roof, Mark came face-to-face for the first time with a witch doctor.

“This strange-looking man scared me just from the sight of him, with odd markings on his face and weird clothing adorned with beads, bones and feathers.

“He was like a half-human, half-creature,” recalled Mark, who had been taken by his family from the UK to Nigeria, to start mainstream school and where they believed old medicine could cure his polio.

Mark did not want to be there and told his father, who threatened him with a slap.

“The witch doctor practised some rituals and sacrifices, which involved slaughtering a chicken and a goat in front of me.

“I’ll never forget the beheaded chicken being held over my head with its blood dripping down on me.

“Then other strange things were rubbed into my head. I was forced to drink foul-smelling concoctions which made me heave.

“The worst part, which left me traumatised, were the tribal cuts. The witch doctor took a sharp blade and sliced into my skin at the tops of my knees.

“It was agonising as he slashed into my flesh many times, blood dripping everywhere.

Being disabled presents many changes, so does being black. Combine both and it’s a pretty toxic mix of double discrimination.”

“My limbs were not numbed first, just cut into savagely. Then a horrible and stinking paste was rubbed into the cuts. The pain was acute.

“As he rubbed the paste into the gashes I nearly went through the roof of the hut. The torture seemed to last for ages.”

It is simply unbelievable, and is one of the stand-out passages from Mark’s book, ‘I Can, I Will’ (Rethink Press), which was published in September and shot straight to the top of the Amazon best-seller list. 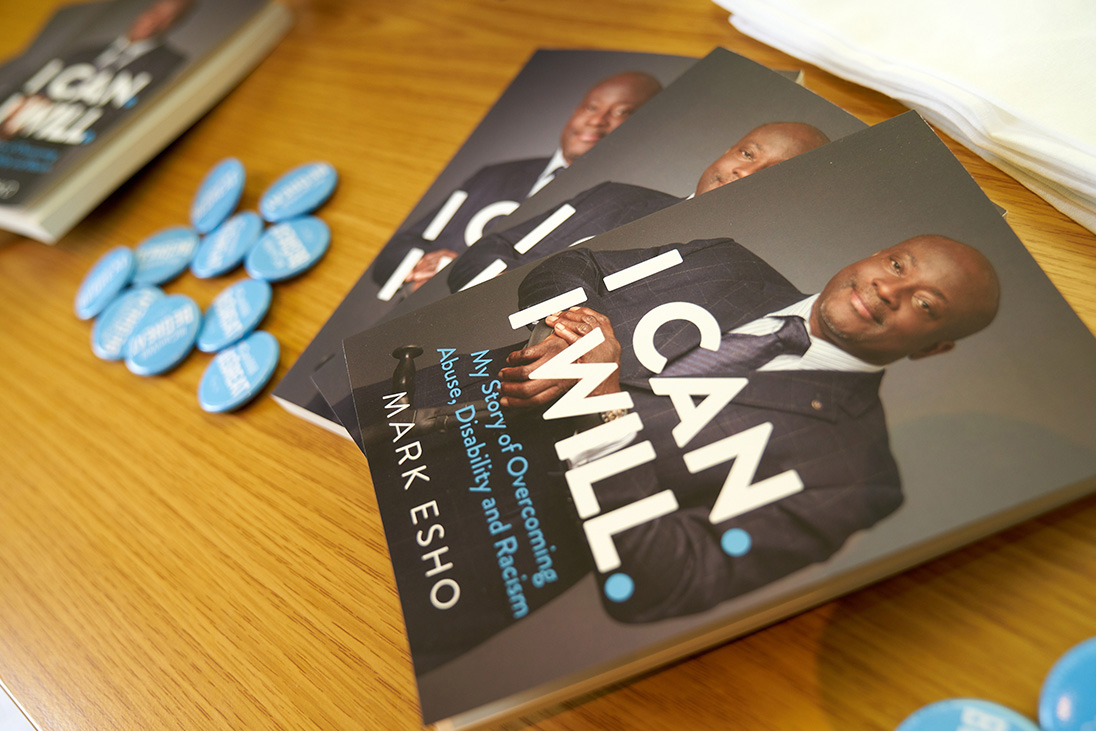 At the book launch at Rotary London headquarters near Great Portland Street, ironically near to where he first met his wife almost 30 years ago, Mark reflected on the cruelty which was inflicted.

“In my dad’s mind, he thought polio was a curse,” he said. “He must have thought he was doing the right thing, but all he was doing was traumatising me.”

The book, which took 18 months to write, is an extraordinary story of how Mark contracted polio from the age of five, was told he had a 10% chance of living and how he would never walk again.

Mark recalls the moment vividly in 1967 when he woke up in the middle of the night, walked to the toilet and returned to bed – not realising that would be the last time he would walk.

“When I got back into bed I had this fit. It’s something you never forget,” he said. “I was shaking all over and then I blacked out. I woke up in the morning in an isolation ward at the hospital and I couldn’t feel a thing.

“I was very scared, frightened and I remember crying ‘why me?’”

At the time, Mark was living with foster parents in Leicester. He had not been immunised.

Although he partially recovered, the battle had only just begun. Mark also had to battle an abusive father, bullying at school, as well as discrimination as a black and disabled person. Not only did he survive, but Mark thrived.

My father was going to abandon me when I realised I was paralysed.”

His father died a couple of years ago. Mark admitted that when that happened, he didn’t feel a thing. “I forgave him, but I never liked him. He was just cruel; not just to myself, but to my siblings.

“Looking back, maybe that was his way of coping, ignoring my disability and treating me as if I was normal.

“It was a sense of shame. My father was going to abandon me when he realised I was paralysed. He told my mum, but she said no. In Africa, being disabled is regarded with a sense of shame, which is why disabled people are treated this way.”

The book is an extraordinary story which wraps up polio, discrimination, adversity, racism, abandonment and child abuse into one absorbing tale.

In a blog, Mark once wrote: “Being disabled presents many changes, so does being black. Combine both and it’s a pretty toxic mix of double discrimination.”

It’s a statement he stands by today. “Things are a lot better than they used to be, but we live in a very visual society when those first impressions are important,” he added.

However, life is good for Mark Esho, a successful businessman who is enjoying what he does, and who has been pleasantly surprised by the positive reaction of the book.

Asked whether he feels cheated by polio, Mark replied: “Sometimes. You can’t not. When you look at some people’s lives with the way they are, you wonder why did I have to go through these struggles to get where I am when others have breezed through?

“I’m definitely in a good place right now. I want to retire early so I can do charity work.”

There are no future books planned, but Mark said that if ever anyone sold the film rights, he’d love Denzel Washington to play his part!

The book can be purchased from Amazon for £12.99 via iWillOrderNow.com