Give someone a limb – you give them a life

Give someone a limb – you give them a life

The gift of mobility is the gift of life. Rotary Jaipur Limb has been able to make that difference in India and across the world for more than 35 years.

It was Margaret’s first visit to India when she caught sight of this attractive young woman, in her late teens, with dark locks tied back in a bun. 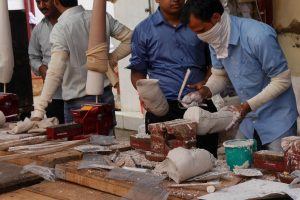 She was lying on a bed, unable to walk, with two helpers measuring and fitting her for callipers to give strength to her legs, made useless by polio. This young woman, with a whole life in front of her, had never walked before.

Later that day, Margaret saw the same two helpers, the young woman between them, her arms around their shoulders, walking towards her, with the aid of her callipers, for the first time in her life.

“I remember seeing her smile and the joy on her face,” recalled Margaret. “I will never forget that moment. It was the joy that, at last, she was going to be like other people.”

This was happening in Bangalore, through the selfless service of local Rotarians.  But the technology was from  the remarkable limb-making workshops of Bhagwan Mahaveer Viklang Sahayata Samiti (BMVSS) at the Sawai Man Singh Hospital in Jaipur, in the Indian state of Rajasthan.

For it is here that the gift of life has been given to thousands of limbless men and women through BMVSS – and, through the efforts of Rotary Jaipur Limb, at other locations throughout India and Africa.

The World Health Organization estimates there are 30 million people who require prosthetic limbs, braces or other mobility devices, yet less than 20% have them.

Margaret, who is a member of Bishop’s Stortford Rotary Club in Hertfordshire, has been the charity’s secretary since 2005, following the death of her husband John, who had previously held the role.

It was Peter Betteridge, from Godalming Rotary in Surrey, who visited the Jaipur workshops in 1984 with wife Jessamine and was astonished to see so many limbless people being treated.

Many had travelled vast distances by all means of transport to be given artificial limbs. No-one was ever turned away, and there was already huge support for the centre from Jaipur Rotarians and the Inner Wheel. 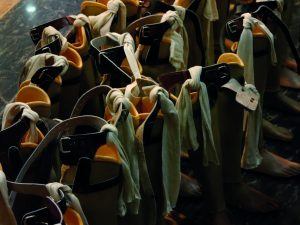 Prosthetic limbs ready to be fitted in Jaipur

Back in the UK Peter, who died in 1993, set up the Rotary Jaipur Limb Project. Not only would it support the work in Jaipur – more so in the early days – but that has expanded by the establishment of permanent limb centres, and temporary limb camps throughout India, and in many countries in Africa and, following the earthquake in 2010, in Haiti.

“It is very moving when you see the work which goes on,” explained Margaret. “It sounds primitive, but this solves their problems. Give someone a limb, you give them a life.

“In the UK, disability is highly valued. Most people in a wheelchair or who can’t walk very well still manage to live a pretty full life – and, generally, we have good accessibility too.

“In some of these countries, and certainly in India, if you can’t look after your family or play your part in the community, it is regarded as dishonourable.

“By giving someone a limb, they are able to play a full part in life, they can lead their family and their dignity is restored.

“I saw this man who had never had treatment for his twisted limbs after polio.  He had to join the queue and was crawling on his hands and knees. People were sitting at desks and he was on the ground and there is no dignity in that. To give someone that ability to stand is amazing.”

“I remember seeing her smile and the joy on her face,” recalled Margaret. “I will never forget that moment.”

Lack of an arm or a leg can be tough anywhere, but in poorer parts of the world, it is especially tough. Some are born with congenital conditions, others may be casualties of accidents, disease or infection.

The World Health Organization estimates there are 30 million people who require prosthetic limbs, braces or other mobility devices, yet less than 20% have them.

The Jaipur Limb was developed at the Mahaveer Hospital, a clever combination of wood and various densities of rubber, vulcanised into a realistic-looking brown foot. The below-knee prosthesis is built from durable, polyethylene pipes. 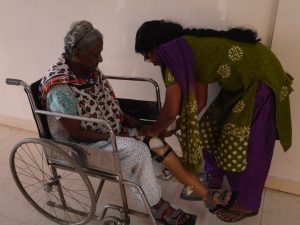 These limbs are hard-wearing lasting for up to four years if worn with a shoe.

In the western world, the cost of replacing a limb would reach thousands of pounds. The Jaipur technology means that limbs can be made and fitted for as little as £50, yet able to cope with rugged environments and cultural needs.

“In India, the recipients have got to fit in with their culture, be able to sit cross-legged, or walk through water or a paddy field,” added Margaret.

Rotary Jaipur Limb has facilitated temporary limb camps all over India to reach out to those who cannot reach a permanent centre.  The biggest is in Bangalore every January for 10 days, supported by Bangalore Peenya Rotary.

There are also permanent centres using the Jaipur technology which have been established in Delhi, Mysore, and parts of Kerala, for example.

One of the latest developments is the use of 3D printed technology to produce limbs. Measurements can be taken remotely. These are inputted into a computer, and, using a 3D printer, limbs can be produced and dispatched back to the point of origin.  This is a much more cost-effective way of ensuring more people are helped.

By giving someone a limb, they are able to play a full part in life, they can lead their family and their dignity is restored.”

It’s not only in India where the project is reaping results. FrenchWest Africa has been the focus of a number of permanent centres, and a new project is being established in Ethiopia.

And it is in Ethiopia where Jaipur Limb is using the latest technology to help it cope with COVID-19.

Whenever the charity opens a new workshop or limb centre, the technicians who will make the limbs are trained.

In the early days in India, technicians from the Jaipur Limb Centre would travel to each new location, to pass on their knowledge to a new set of trainees. However, the pandemic has made travel difficult, if not impossible.

At the Gondar Hospital in Ethiopia, manager Roger White, came up with a brilliant solution to the problem. Iristick produce industrial smart glasses, which are not just spectacles, but they are connected to an Android phone. 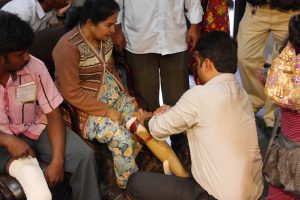 The Jaipur Limb was developed at the Mahaveer Hospital

By using these special glasses, trainers can now demonstrate what the trainees need to learn, without having to travel to their location, while they watch on a TV or laptop.

With their use, there is a 60% cost-saving over face-to-face training.

Initially, the smart glasses are being used to train new technicians at the Gondar Centre, but life will have changed forever after COVID.

Margaret explained: “We are now holding meetings using Zoom or similar software which would have meant considerable travel costs. The money we are saving can be put to better use in giving new limbs and lives to amputees, by distance training.

“The possibilities are endless.

“We are beginning to run limb camps and centres in remote areas where measurements are taken and sent by email to the city where 3D printers print out limbs that will be a perfect fit. They are then posted back to the point of origin.

“Iristick will add another effective cost-saving and efficiency enhancing area to our capabilities, all through technology that a generation ago could not have been dreamt of.”

It is so rewarding to see how you give them back their dignity.”

By the time of their 25th anniversary in 2009, Rotary Jaipur Limb reckoned they had produced a quarter of a million limbs. Factor in a further decade, and the impact is immense.

As charities fight for support, the challenge for Rotary Jaipur Limb is to continue the work they are doing and, to achieve this, more funds are needed.

They are looking for more ambassadors, speakers and marketing experts plus more clubs to take financial ownership of a project for the charity or to ‘adopt a workshop’ to ensure its sustainability.  There are a number of projects that cannot proceed because of lack of funds.

Asked why she continues the work first started by her husband, Margaret admits that the visits to India focuses her attention.

“I did it in the first place because I was asked to,” she said. “But, having been there, it is so rewarding to see how you give them back their dignity.

“You give them their independence, their mobility, their normality, and you give them a new life again. It is just very rewarding, and you can do this for just £50.”

Find out more at www.rotaryjaipurlimb.org.uk 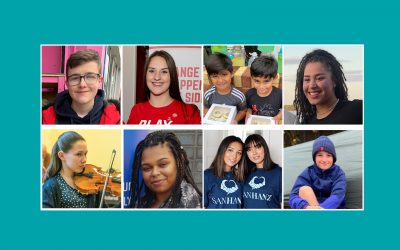 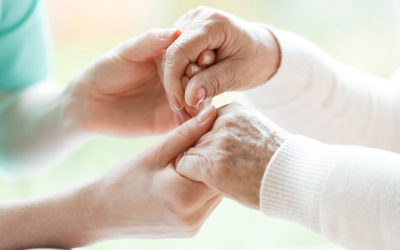