It is now three years since the last documented case of the wild polio virus in Nigeria, which is likely to be declared polio-free next year. However, with Pakistan and Afghanistan still reporting cases of the crippling disease, Rotary leaders have warned that the world must now finish the job.

The battle against polio has reached a historic milestone with Nigeria standing on the brink of becoming the final African nation to be rid of the disease.

The West African country, which has been ravaged by civil war, passed the landmark goal of three years without a declared case last week.

Rotary International has been at the forefront of global efforts to eradicate polio as part of the Global Polio Eradication Initiative, whose prime movers also include the World Health Organization (WHO), UNICEF, the Centers for Disease Control and Prevention and the Bill & Melinda Gates Foundation.

This short thread is on point 👇

We cannot let up on efforts to #EndPolio.The final push is the most important.

Thank you to @Rotary and all our partners working to ensure no child suffers from polio ever again. https://t.co/WSC72nWhgr

Dr Tunji Funsho, Chairman of Nigeria’s Polio Committee for Rotary International, said the liberation of areas from Boko Haram had been key to ensuring no new cases of polio surfaced.

He said: “The challenge was in the northeast, particularly in Borno State, but in the last three years we have been able to access more than 90 per cent of children that we were not able to access in 2016.”

It will be several months before Nigeria can officially be labelled polio-free.

Certification that Nigeria and the whole of the African region is polio-free is expected to be issued in mid-2020.

“We are confident that soon we will be trumpeting the certification that countries have, once and for all, kicked polio out of Africa,” said Dr Matshidiso Moeti, WHO’s Regional Director for Africa.

Once Nigeria has been declared polio-free, Pakistan and Afghanistan will remain the final two outposts in the world where polio is endemic.

Rotary must utilise its connections to ensure we keep our promise, that we advocate and fundraise, so every child is part of world history and will remember the day when collectively Rotary, our partners and all the world finally celebrates that ‘Our World is Polio Free’.”

Michael McGovern, Rotary International’s International PolioPlus Chair, praised the hard work and dedication of Rotarians in Nigeria and around the world for reaching this landmark.

He said: “We can take pride in this progress, but it is not time to celebrate quite yet.

“We still have work to do and we must continue making it a priority to reach every child in Nigeria – and other polio-threatened countries – with the polio vaccine, and build strong levels of immunity to fully protect the entire population against polio.

“After the African region is certified wild poliovirus-free later next year, five out of the six WHO regions in the world will be considered polio-free.

“As the first organisation to dream of – and promise to deliver – a polio-free world, Rotary is committed to fulfilling our promise.

“Our progress in Nigeria is a big step toward that goal, but we need to maintain momentum so that Pakistan and Afghanistan see the same level of progress.

“It’s crucial that Rotarians continue to support polio eradication as we overcome the final hurdles in the fight to end the disease forever.” 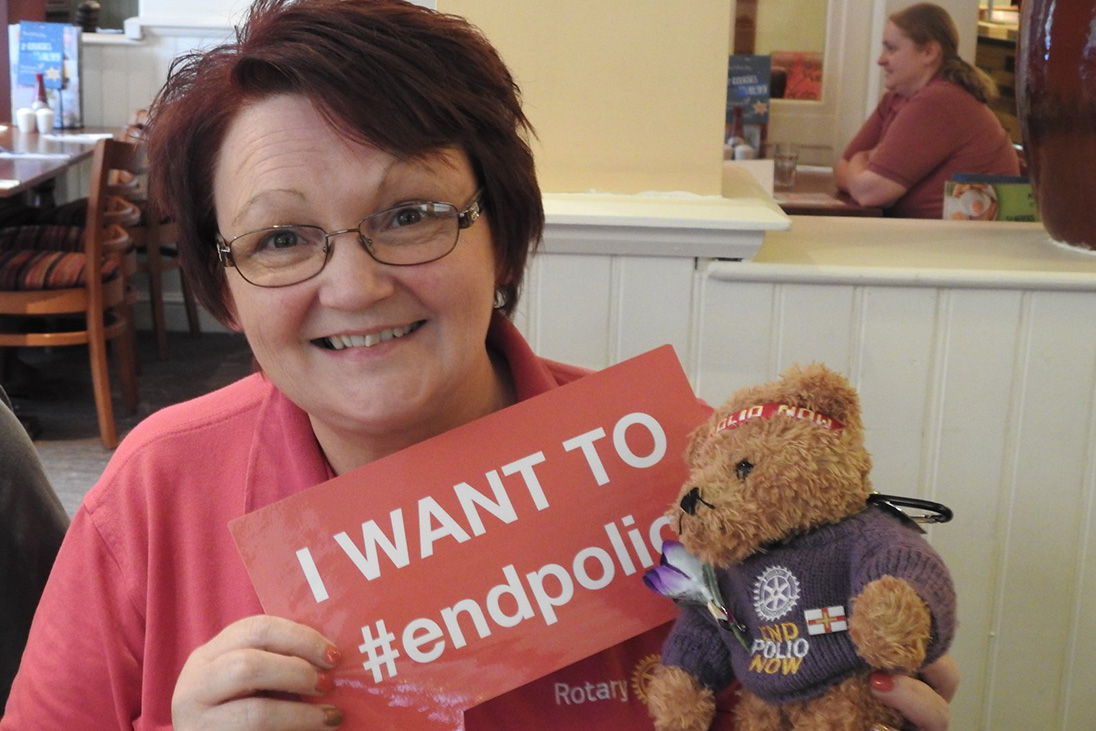 Rotary in Great Britain & Ireland President, Donna Wallbank, admitted her first reaction on the news from Nigeria was a joy that the world was now a step closer to becoming polio-free.

“I then offered a silent prayer ‘Please God, let’s finish it” hoping that this news will inspire the doubting Thomases to join us in completing our promise to the children of the world that we would eradicate polio,” she said.

Donna said she also spared a thought for the vaccinators who risked their lives in breaking cultural barriers to persuade religious leaders to allow them to give children the life-saving vaccine.

“So many people who believed, whether they have a faith or not, have made this happen,” added Donna. “People and organisations working together to reach this memorable and historic day.

“When I heard the news from Nigeria, my thoughts turned to those who have made the greater sacrifice in truly living what they believe.

“They believe giving every child the vaccine would make their country free from the crippling disease, particularly in the areas where Boko Haram have made it so difficult for them to keep that personal belief.

“Giving the life-saving polio vaccine to children is above any political or deliberately added terrorist fear. I have the greatest respect for those volunteering and working in some of the most difficult circumstances in Nigeria.

“In fact, I am in awe of their determination to keep their promises, as Rotary itself gave.”

After 3 years without a case of wild poliovirus in Nigeria, @dr_funsho, Nigeria National PolioPlus Chairman @Rotary, is confident the World Health Organization (WHO) AFRO region could be certified wild polio-free as early as 2020: https://t.co/ByH9dI5GsB

Donna from Brynmawr Rotary in Wales said it was important that the world does not take its eye off the ball with polio.

She explained: “We should not celebrate too soon, as we have much to do to ensure the world is free from a disease that once created fear in communities across all continents.

“Rotary must utilise its connections to ensure we keep our promise, that we advocate and fundraise, so every child is part of world history and will remember the day when collectively Rotary, our partners and all the world finally celebrates that ‘Our World is Polio Free’.

“Together we are stronger and together we will keep our promise to have a world free of polio.”

It is wonderful to see countries that have historically proven to have such a stronghold on this disease are capable of eradication – India, of course, was another major milestone in this regard and Nigeria reinforces the possible.

Jannine Birtwistle from Guernsey Rotary is Rotary GBI’s End Polio Now champion. She shared her admiration for the vaccinators in Nigeria who had made the breakthrough.

“What a milestone – to reach the 3rd anniversary of the onset of the last wild poliovirus case in Nigeria,” she said.

“It has taken so many people from so many organisations over so many years to reach that point.

“Only together can we end polio and I have huge admiration and respect for those working on the ground in some very difficult circumstances in Nigeria, particularly in the areas where the Boko Haram have made it so problematic and dangerous to administer the life-saving polio vaccine to children.”

Jannine pointed out how there are up to 60 countries in the world where the Global Polio Eradication Initiative needs to continue with over 400 million children needing to be immunised, in most cases multiple times, each year.

She added: “The only way to end polio is together and Rotary’s commitment is to continue to raise a minimum of $50 million per year to attract the $100 million per year in matching by the Bill and Melinda Gates Foundation.

“This is a vital part of the global fundraising effort for the $3.27 billion still needed for the 2019-2023 End Game Strategy.

“Our new Get Moving to End Polio-sponsored activity, being introduced this Rotary year (running from World Polio Day on October 24th to May 3rd, 2020, on the final day of Volunteer Expo in Birmingham), will help focus our thoughts on Afghanistan and Pakistan.

“This sponsored activity will feature the number 1240 in whatever way your imagination allows because that is the length of the Afghanistan-Pakistan border that the WHO and Global Polio Eradication Initiative use in their work.”

Polio will be beaten – now is not the moment to relax, it is our time to power out over the finish line.”

Latest Global Polio Eradication Initiative (GPEI) figures show that there have been a total of 65 cases of wild polio worldwide so far in 2019 – 53 in Pakistan and 12 in Afghanistan.

The GPEI, which is backed by the WHO, Rotary International and others, began its push to wipe out polio in 1988 when the disease was endemic in 125 countries and was paralysing almost 1,000 children a day globally. Since then, there have been at least a 99% reduction in cases.

She said: “It is wonderful to see countries that have historically proven to have such a stronghold on this disease are capable of eradication – India, of course, was another major milestone in this regard and Nigeria reinforces the possible.

“However, we have to push hard on our efforts for Pakistan and Afghanistan and with the continued support and action by Rotary members around the world.

“Polio will be beaten – now is not the moment to relax, it is our time to power out over the finish line.”

The countdown to history