Currently, 85 million doses of the Covid vaccine have been given in the United Kingdom since January, with 58.1% of the population fully vaccinated.

Volunteers and staff at a Covid vaccination centre will be able to continue to enjoy a reviving cuppa, thanks to Darlington Rotary in County Durham.

When Rotary found out that the Darlington Arena Vaccination centre had run out of funds to provide tea, coffee and biscuits they came to the rescue. 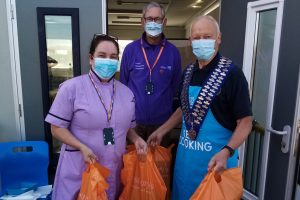 Several members of Darlington Rotary volunteer at the centre and a chance conversation with NHS Matron Deborah Harris, who runs the operation, lead to a call out to President, Peter Phillips, who approved an emergency donation of £100 to replenish the refreshments.

Peter said: “They have been doing such an amazing job. It seemed wrong that there were no funds to give the hard-working staff and volunteers a tea or coffee break.”

Ms Harris said: “It’s such a lovely gesture and we’re very grateful to Rotary for such a thoughtful gift.”

Late last year Knutsford Rotary in Cheshire offered to assist the Knutsford Medical Partnership with their vaccine rollout at the Knutsford Community Hospital having realised that the location and layout of the hospital was a recipe for gridlock and frustration. 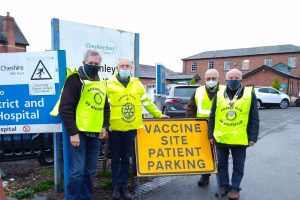 Several of our members are trained in traffic management, a fund-raising service they usually sell to local event organisers, so the Knutsford Rotarians used this experience to steward people turning up for their vaccination.

It turned out to be the largest community service project in the club’s 82-year history.

There is no doubt that this massive ongoing challenge involving over 200 volunteers from the town has been the most influential project ever undertaken by Knutsford Rotary Club.”

Organisers Alan Ingram and Tony Booth calculated that since January and up to the end of May, Rotarians had volunteered 1,200 hours supporting 25,000 vaccinations over 45 days for seven hours a day. That number has clearly increased over the past two months.

“There is no doubt that this massive ongoing challenge involving over 200 volunteers from the town has been the most influential project ever undertaken by Knutsford Rotary Club,” said Alan and Tony.

Six Rotary clubs in North Hampshire joined forces to help with the vaccination of patients in the NHS North Hampshire Clinical Commissioning Group which stretches from Hartley Wintney to Overton and from Alton to Tadley.

A mass vaccination centre was rapidly set up by the NHS team at the Hampshire Court Hotel in Chineham near Basingstoke.

They swiftly agreed to supply and manage marshals to organise the car parking and the patients in the outside waiting area before entering the centre where the clinical staff took over.

Rotary’s efforts were well received with messages of support for their work with the vaccination programme.

The six clubs continued their support for six months finishing on July 1st. 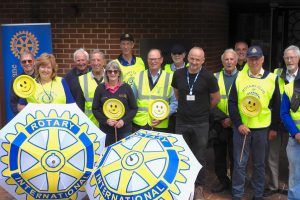 Group of Rotarian from all six Clubs at the end of their six months of their volunteering at the Chineham vaccination centre in Basingstoke.

The vaccination centre’s performance was one of the top five in the country and they were thanked by the Minister of Health for their achievement.

The vaccination centre was not the only commitment for Basingstoke Deane Rotary during the dark days of the pandemic.

They have been supplying Spotlight, a local children’s charity, with drivers to deliver food parcels to the needy.

They have done this for 25 weeks, volunteering for 400 hours and delivering around 2,000 food parcels.

The Hampshire club have helped two charities buy replacement commercial vehicles with help of District Grants and raised £30,000 as their half share of the cost of a cardiac ablation machine for our local NHS hospital. 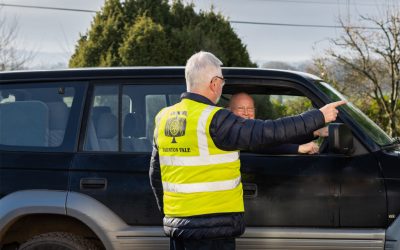 What inspires people of different ages, of different personal situations and backgrounds, of different skill sets and experiences, to volunteer during a time of crisis? Julie O’Donnell asks members of one of Great Britain and Ireland’s Rotary districts, District 1200 which covers all of Somerset (plus parts of Wiltshire and Dorset), to reflect on their pathways to volunteering at coronavirus vaccination clinics. 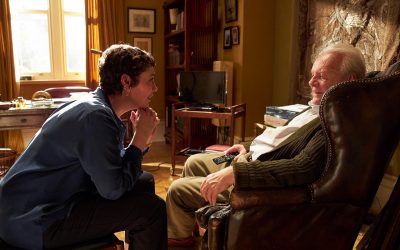