Causes for celebration and cases of kindness

Causes for celebration and cases of kindness

In this round-up we discuss recent achievements and announcements that exemplify one of Rotary’s core objectives: creating lasting change within our communities and beyond.

Despite the impact of COVID-19, Earlscliffe Interact Club arose in 2020 from a joint initiative between Head Teacher Joss Williams and Channel Rotary’s then President Malcolm Stewart.

Interact Clubs are formed under the abacking of Rotary International and bring together young people aged 12-18 in nearly 11,000 clubs in 109 countries worldwide to develop leadership skills and support their local communities through charitable work.

“It is wonderful to have some concrete examples of Service Above Self to talk about in assemblies and conversations with pupils. I look forward to the continued success of this wonderful venture.”

The new club, led by President Iulia Lambrino, have recently been providing Christmas gifts for disadvantaged children in Folkestone and donated £1,000 to Demelza House Children’s Hospice.

Head Teacher Williams said: “We are delighted that our Interact Club has started so strongly and very proud of our links with Channel Rotary.

“It is wonderful to have some concrete examples of Service Above Self to talk about in assemblies and conversations with pupils. I look forward to the continued success of this wonderful venture.” 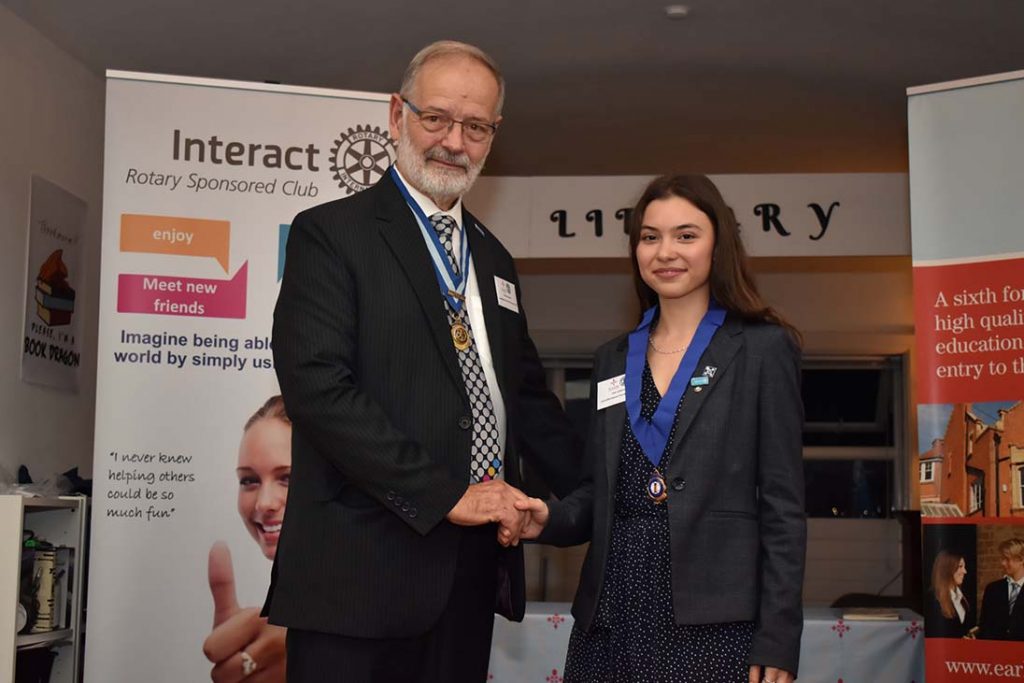 Presentation of the Interact Chain of Office by Rotary Immediate Past District Governor Brian Dunne.

John Powell was a Rotarian for 30 years, the majority of that time with the Wylde Green Rotary Club where he was one of their founding members and then later with the Sutton Coldfield Vesey Club.

John had been awarded a Paul Harris Fellowship in recognition of his service and commitment to Rotary over so many years – his golf days and fashion shows raising considerable funds for Rotary causes.

When John sadly passed away, his family suggested instead of funeral flowers, family members and friends might wish to donate funds to Rotary charities and the Sutton Coldfield Prostate Support Group was their preferred recipient.

Nick Thurston, President of the Wylde Green Rotarians commented: ‘Wylde Green Rotarians were pleased to join our colleagues from Sutton Coldfield Vesey Rotary Club in remembering John Powell, by jointing donating to the local Prostate Support Group. We hope the funds will help Good Hope Hospital in their fight against prostate cancer.’

Earlier this year, we reported on Passionately Purple Gin – a recent venture by Salford with Swinton Rotary with the aim of raising funds for the End Polio Now campaign.

This month, the Amersham Rotary Club put a bottle of Passionately Purple Gin up for auction at their annual Golf Classic Day and it managed to raise an astounding £270.

Normally the bottle would have gone into a raffle but Rotarian Richard McKeen argued that having it in the auction would allow the opportunity to explain all the great work Rotary does for polio elimination. 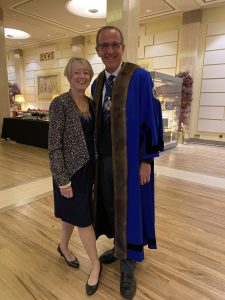 It goes to show just how passionate Rotarians everywhere are about reaching the finish line in our fight against polio.

Finally, Rotarian Roger Harper MBE of Bristol Breakfast Rotary Club has been elected and installed as The Prime Warden of the Worshipful Company of Basketmakers.

The Worshipful Company of Basketmakers was established in 1569 and has a membership of 250 men and women actively supporting the basketmaking trade.

It is hoped that a contingent of members from Bristol Breakfast Rotary Club will be attending one of the Basketmakers’ livery dinners in 2022 to support Roger.

On his election, Roger said: “It is a great honour for me to be appointed to this high profile role within the City of London. I hope to able to give the Worshipful Company a very visible presence by attending many civic and livery events.”