Omagh historian, author and retired GP, Dr Haldane Mitchell, died in 2016. But the former Rotarian left a legacy which lives on.

Back in 1990, Dr Mitchell compiled his first edition of ‘Images of Omagh and District’ with the support of Omagh Rotary, of which he was a dedicated member and past president.

The books traced the history of the Northern Ireland town, including one volume in 2003 which chronicled the troubles in Omagh, with the experiences of those who witnessed the 1998 bombing.

Over the years, more than £50,000 has been raised through book sales which have been distributed by the Rotary club to various local charities.”

Other issues looked at the hospital and other aspects of Omagh.

No-one then would have imagined that Dr Mitchell would go on to produce 22 editions – on an annual basis – before sadly passing away. 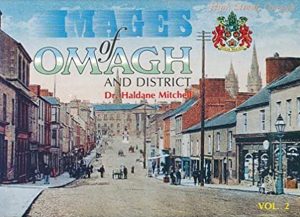 Volume 2 of Images of Omagh and District by Dr. Haldane Mitchell

But Dr Mitchell left a legacy with so much of the history of Omagh and District captured in the pages of those popular books – many of which made their way across the world to sons and daughters of the area who had moved abroad.

Many happy memories will, I am sure, be recalled by old and young as they flip through the book and recognise Omagh characters and places.”

Over the years, more than £50,000 has been raised through book sales which have been distributed by the Rotary club to various local charities.

In the last year alone the final dispersal of around £20,000 has gone to various worthy causes, including food banks, Care for Cancer, NSPCC, St Vincent de Paul and Camphill Community at Clanabogan, as charities struggled to raise money during the COVID-19 pandemic. 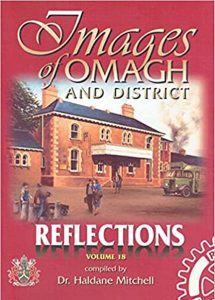 The front cover of Volume 18, Images of Omagh and District by Dr. Haldane Mitchell

At the club’s annual meeting, held by Zoom, tributes were paid to the immense contribution of Dr Mitchell and his wife, Margaret, who helped proofread each and every book produced.

In the foreword to the first ‘Images of Omagh’ book the then president of the Rotary club, Dominic Pinto, said the club decided to support the publication because it contained a unique collection of photographs depicting the recent history of Omagh and its people.

He wrote: “Dr Haldane Mitchell is to be congratulated for his extensive research and for bringing together examples that illustrate life as it was in the town.

“Many happy memories will, I am sure, be recalled by old and young as they flip through the book and recognise Omagh characters and places.”

So many more memories were revived in the publications that followed over the years.

In the final edition of ‘Images of Omagh’, Mr Pinto again produced the foreword and concluded with the words: “The Rotary club salutes you (Dr Mitchell) for the wonderful memories you have left us of our beloved Omagh.”