Across the isles, everyone has been distressed upon witnessing the ongoing conflict in Ukraine.

In response to the deepening humanitarian crisis, Rotarians all around the country have stepped up their volunteering efforts to help those who have been affected by the conflict.

One of the many examples of this extraordinary service came from Wiltshire where the Rotarians of Devizes Rotary came together with the town council to collect for victims of the war.

People were donating and then going to the cash machine to get more money out and donating that as well.”

They collected an incredible £3,800 over the course of the day – at one point collecting at a rate of £600 an hour!

Speaking to the Gazete & Herald, Devizes Rotary VP Paula Winchcombe, expressed her happiness at the success of the collections: “We had only been set up a few minutes and we had £200 in the collecting tin and that giving didn’t stop all day.

“The people of Devizes are always very generous when we hold collections, but this really was something else. People were donating and then going to the cash machine to get more money out and donating that as well.”

In a similarly successful effort, the Rotarians of Burnham-On-Sea Rotary banded together at one of their local garden centres to collect over £2,000 for those affected by the war. 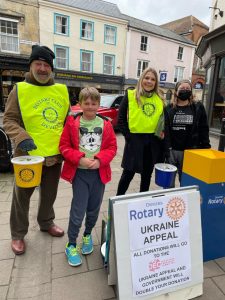 Rotarians volunteering as part of Devizes Rotary’s Ukraine appeal that raised over £3,800 by the end of the day.

Burnham-On-Sea Rotary President Chris Ashton told Burnham-On-Sea.com: “We have all been shocked at the horrendous scenes coming out of Ukraine this week and wanted to help.”

“The money collected will help the Rotary Foundation buy medical supplies on the ground in Ukraine and the bordering areas.”

It isn’t just money collecting that Rotarians have been getting up to as displayed by Canvey Rotary who transformed a shop in a South Essex shopping centre into a ‘Ukraine Appeal Centre’.

With permission to take control of what was previously empty space in the shopping centre, thanks to the Rotary club the space will now be available for residents to drop off supplies that will be delivered to Ukrainian refugees in Poland.

As quoted in the Southend Echo, Canvey Rotary President Anne Earl said: “We are very grateful to the Castlepoint Council for allowing us to use the unit at the Knightswick Centre on Canvey.

“Rotary not only help their local communities but are a worldwide organisation and step up whenever they have the opportunity to help.

“We have an amazing community who always support what Rotary do and this project is no exception with people already coming through our door with their donations.”

The response was huge, we really didn’t expect that and I feel like it brought the community together.”

On the topic of donating supplies, members of the Isle of Thanet Sunrise Rotary Club stepped up along with several other volunteers to help with a massive Ukraine aid collection at Quex Barn in Birchington, where thousands of donations were made.

The collection was organised by the barn’s owner Ian Mather as well as Susan Johnson, Anna Sabatowska and Edyta Jobczynska – an employee of Quex Barn who was inspired by the collection efforts being made in her native Poland.

Speaking to The Isle of Thanet News, Edyta said: “I had a lot of conversations with our customers at the barn and felt like everyone wanted to do something to help but didn’t know how to approach it.

“I asked Ian if we could make the barn a collection point and he’s said absolutely, as he wanted to speak to me and ask whether there is anything he could to to help.

“The response was huge, we really didn’t expect that and I feel like it brought the community together.”

Here are some more highlights from across social media of clubs across the isles helping to collect funds and supplies for those affected by the conflict:

A BIG thank you to everyone who has helped so far with our Ukraine appeal. Last weekend we took to the warehouse in Bridgwater
50 duvets
7 sleeping bags
11 blankets
28 boxes of nappies
27 boxes of food and toiletries. pic.twitter.com/sGowtOZPG1

A post shared by Rotary Club of Chard (@chard_rotaryclub)

We had the opportunity to support Llanelli Rotary club today with their collection for Ukraine. The generosity of people was amazing. Thank you. Well done Rotary Llanelli pic.twitter.com/4KMq3RNwy7

9 am Friday Morning and Hexham Rotary Ukraine collection is underway .The people of Tynedale have been so generous we are doing it again tomorrow pic.twitter.com/BMrTg9AXuy

Amazing generosity from people in @wt_Porthcawl to Porthcawl @Rotary collecting money going to ⁦@Rotary⁩ branches in towns across ⁦@Ukraine⁩ to spend on local support needs. pic.twitter.com/TCR0H6ZS9k

If you wish to make a donation to help support those affected by the conflict in Ukraine, The Rotary Foundation (TRF) has confirmed that all funds received in its Disaster Response Fund by 30 April 2022 will qualify for use in support of the Ukrainian relief efforts.

Within the first week of this fund being open over £52,000 has been donated which is an absolutely outstanding figure that can only get higher.

Donations can be made online here or through completion of our donation forms here.

You can find more information about Rotary’s response to the war in Ukraine and other fundraising resources by visiting our website.