Rotary honour for business at the forefront of Covid fight

Rotary honour for business at the forefront of Covid fight

A company in North East England, which has been at the forefront of the fight against COVID-19, has been recognised by Rotary International.

A Rotary national Certificate of Appreciation has been presented by Rotary North East District Governor, Barbara Broadbelt, to FUJIFILM Diosynth Biotechnologies (FDB) in recognition of the company’s development, manufacture and distribution of millions of doses of the Novavax vaccine. 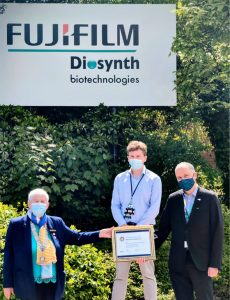 Barbara met with Paul Found, Chief Operating Officer and Matthew Binks, Graduate Process Engineer, at the site to hand over the award.

Barbara, who was born in Billingham and lived and worked there for much of her life, said: “On hearing about FDB’s involvement in this fantastic development we felt they were an ideal recipient of our international certificate of thanks.”

She added that there was a correlation between the development of COVID-19 vaccines with Rotary International’s pledge for a polio free world, which was made in 1985.

“There were then 125 polio endemic countries but in the past few years, only two countries have reported cases of polio caused by the wild poliovirus.

“But, as with the COVID-19 virus, no child anywhere is safe until every child has been fully vaccinated. I see a similarity in our efforts to eradicate polio and Fujifilm’s work related to overcoming and managing COVID-19 worldwide.”

Paul Found said: “We were delighted to receive this award from Rotary and appreciate the recognition of the work we have been doing to continue the fight against COVID-19.”

There’s a last chance to take part in a virtual dog show which has been organised by the Rotary e-Club of Innovation.

The closing date for the ‘Pooches on Parade’ competition is July 18th. The cost is £3 or more per photo entry, which is in support of Medical Detection Dogs and Rotary charities.

The best in show will receive a personalised portrait of their dog. For more details, visit their website.

The club has been driven by Iulia Lambrino a student from Romania who, as the club’s first President, has enthusiastically driven its formation and charitable work with the encouragement of her parents who are both Rotarians in Romania. 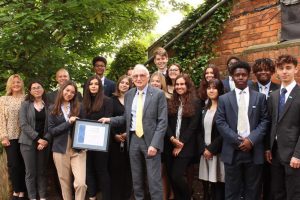 Iulia has been supported by her leadership team at the college for a club, which has 22 students drawn from eight different countries.

Their recent charitable activities include providing Christmas gifts for disadvantaged children in Folkestone and donating £1,000 to the Demelza House Children’s Hospice.

Interact clubs are sponsored by Rotary clubs to enable young people aged 12 to 18-years-old to work together to tackle issues in their community. These include hands-on service projects and charitable fund-raising.

The end of the Rotary year in June has meant Presidents have handed over the baton to their successors. Among them is Tony Cook, who was Dover Rotary’s 98th President.

Club member, Peter Sherred, described Tony as a motivational President, who enjoyed an extraordinarily successful year in leading the club through the incredibly challenging times.

With traditional ways of fund-raising restricted, Tony came up with the idea of producing a Christmas video of club members singing ‘Jingle Bells’ to lift people’s spirits. This proved to be a good fundraising exercise over social media raising money for vouchers for the café at the Outreach Centre, which caters for the homeless. 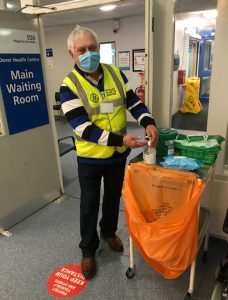 Leading from the front Tony was a volunteer, with many of club members, at Dover Health Centre for the vaccination clinics.

During the year and under his leadership the Dover club raised money to save the Dover Film Festival which had been badly hit by the lockdown.

Tony organised the club’s litter pick contribution to the Keep Britain Tidy Campaign in June when considerable amounts of litter and other rubbish were removed from parts of the port town involving Rotarians from Dover and South Foreland Rotary clubs.

In addition, Tony’s ambition to help the Dover Outreach Centre at Victory House in Snargate Street has seen the club raising money for the renewal of the boilers in the premises.

And in his final week as President, Tony was at the forefront of an exercise by club members to adopt a circular flower bed at Granville Gardens from Dover District Council to plant hundreds of flowering plants in the circular seafront feature which had originally been the location of a fountain. 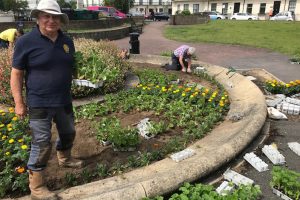 Dover District Council provided the site and plants, but Tony was, with his helpers, reduced to his knees as he led the planting exercise – all for the benefit of Dover.

Peter Sherred said: “Tony was a former Rotarian of the Sandwich Club and has twice been made a Paul Harris Fellow for his outstanding service ethic.

“He has been Dover Club’s 98th President and will be a hard act to follow.

“Dover should be profoundly grateful for his leadership of the town’s Rotary club and for the example he has set during a particularly difficult year in his service activities and the club’s fund-raising by his focus on positivism rather than negativism during long periods of enforced restrictions.” 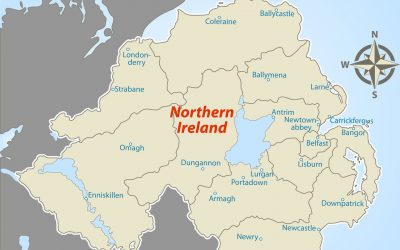 Omagh historian, author and retired GP, Dr Haldane Mitchell, died in 2016. But the former Rotarian left a legacy which lives on. 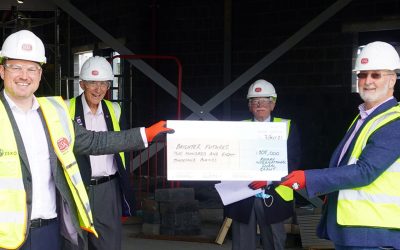 Rotary clubs across Swindon have joined forces in supporting a fund-raising campaign to establish a radiotherapy unit in Wiltshire. 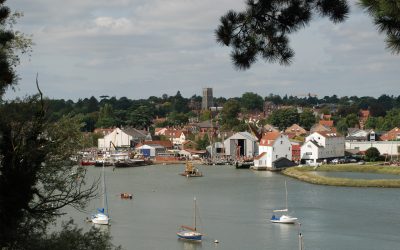 Heritage Open Days is a European heritage festival to raise appreciation for Europe’s rich and diverse cultural assets and their need for care and protection.

Each year there is a national theme, and for the September event it is going to be ‘edible England’.