Rotary wrap up in Lancashire

Rotary wrap up in Lancashire

A new Rotary satellite group has been part of a Lancashire-wide partnership to help the homeless in the county.

No matter what the weather the good folk of Lancashire should be warmer this winter thanks to Rotary and the thousands of people who have answered the call to #warmaheart and #wrapuplancs this autumn.

The Fylde coast of Lancashire is perhaps a unique place. Lytham in the south is regarded as one of the most exclusive places in the county and Blackpool is recognised as having some of the most deprived communities in the country.

WrapUpLancashire, spearheaded by the partnership of Great Harwood & Rishton and Accrington Rotarians Pam Holgate, Ann-Marie Etherington, along with Malcolm and Jacquie Baldwin, has provided Rotary Lytham’s new satellite group — TotallyRotaryFY8 — with an ideal project to get its teeth into.

The project has helped to raise the profile of the group, the club and Rotary but, above all, provided the residents of Lytham St Annes with an opportunity to help the few under-privileged families in their own towns, as well as their many homeless and those in need in Blackpool.

The scheme has been taken on by several clubs in the Cumbria and Lancashire District, as well as in Rotary District 1285.

For a contribution from Rotary Lytham, the central organisation provided advice and information, linking Facebook pages, collection boxes and sacks.

Club lead for TRFY8 since its inception in the Spring has been its only woman member, Joy Chatters.

Ironically the new group is made up entirely of women, led by Chair Deborah Wilkinson, whose enthusiasm for the WrapUp project was fired by her own experience working with one of Blackpool’s homeless projects, Amazing Graze.

After meeting with Pam and Ann-Marie, the Lytham group set about launching the WrapUp entirely through Social Media, with one mention in the local press.

Thanks to Lytham Skip Hire, who offered a large suitable collection centre above their offices, the team, with great assistance from friends, has been able to sort and distribute around 1,000 coats together with jumpers, hat, scarves and gloves.

They have gone out not only to those who sleep rough every night in the area and underprivileged families, but also the local women’s refuge, local Syrian refugee families, charities helping young offenders and in fact anyone in need of good warm clothing.

“It’s been a real privilege to be able to help with WrapUp,” says Deborah.

“The support has been amazing and we must thank the guys at Lytham Skip Hire and also all the local stores, clubs, and surgeries who have had boxes, not forgetting the friends who have been helping for the past few weeks.”

Another day of sorting done. These bags have been taken to Maundy Relief in Accrington this morning ready to make life a little more comfortable for lots of people. #giveacoat #warmaheart #wrapuplancs #rotarypeopleofaction pic.twitter.com/11HEu5PeIX

Deborah is now looking forward to leading the group in their future plans, which will include mapping out defibrillators in the town and helping with Rotary Lytham’s major project Rise against Hunger in May.

There could be more bag packs for Lytham’s under-privileged families, which was the first of the group’s projects back in the summer.

Find out more about Wrap Up Lancashire by visiting their website. 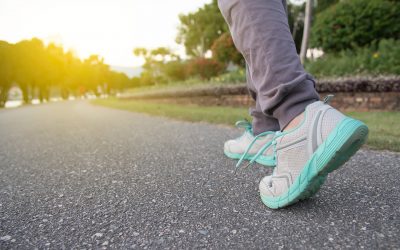 Treekly, an exciting environmental app has been receiving plenty of traction among Rotarians. 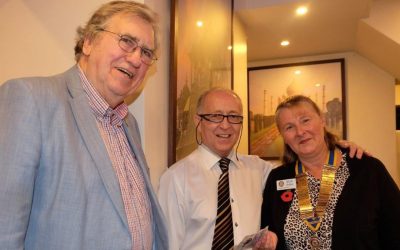 Rotary clubs have been busy celebrating and fundraising in the last weeks as well as supporting refugee’s children and providing them with an opportunity to enjoy themselves during a special ‘Fun Day’. 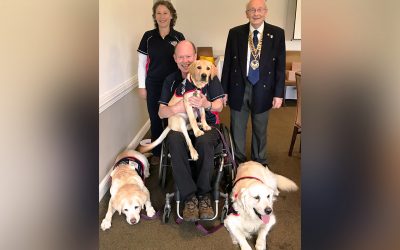 Hounds for Heroes a charity providing dogs for armed and emergency services veterans has been selected by President of Fareham Rotary as his presidential year charity.