One of Great Britain’s most promising tennis stars, Abbie Breakwell, has accepted the role of becoming a Rotary GB&I Ambassador.

Abbie Breakwell has experienced a meteoric rise since she started her sporting journey, having only taken up wheelchair tennis in 2016 and now finding herself ranked 34th in the women’s world rankings.

Abbie has competed in and won various tournaments all over the world, including whilst battling through the COVID-19 pandemic and starting her degree at Loughborough University in Exercise and Sports Therapy.

However, preceding even her journey in wheelchair tennis was her journey with Rotary, joining Long Eaton Interact Club back in 2014 when she started at The Long Eaton School.

In her exclusive interview with Rotary Great Britain & Ireland, Abbie recalls: “My sister was actually the President of the Interact club in my school. My sister started in 2010 and, even though I didn’t officially start until 2014, I was already helping at all the events – sponsored swim, charity fundraising, End Polio Now – and I was helping her throughout those first four years so when I came to the school I could finally join the club.”

Evidently Abbie has always been passionate about charity work from a young age and has only increased the time she lends to volunteering as her profile has risen.

During the height of the pandemic, Abbie held a lockdown inclusive seated workout that was viewed hundreds of times and local schools used it at the breakfast clubs to help energise the children before the school work. She was also recently ranked the 10th most influential disabled person in the UK on the Shaw Trust Power100 list.

Despite her increasingly busy schedule of both training and studying, Abbie has always found time to give back to Rotary, taking part in the Rotary Empowering Girls seminar as recently as February 2022.

Now, Abbie is ready to take the next step in her journey to promote empowerment and inclusivity by becoming a Rotary GB&I Ambassador. 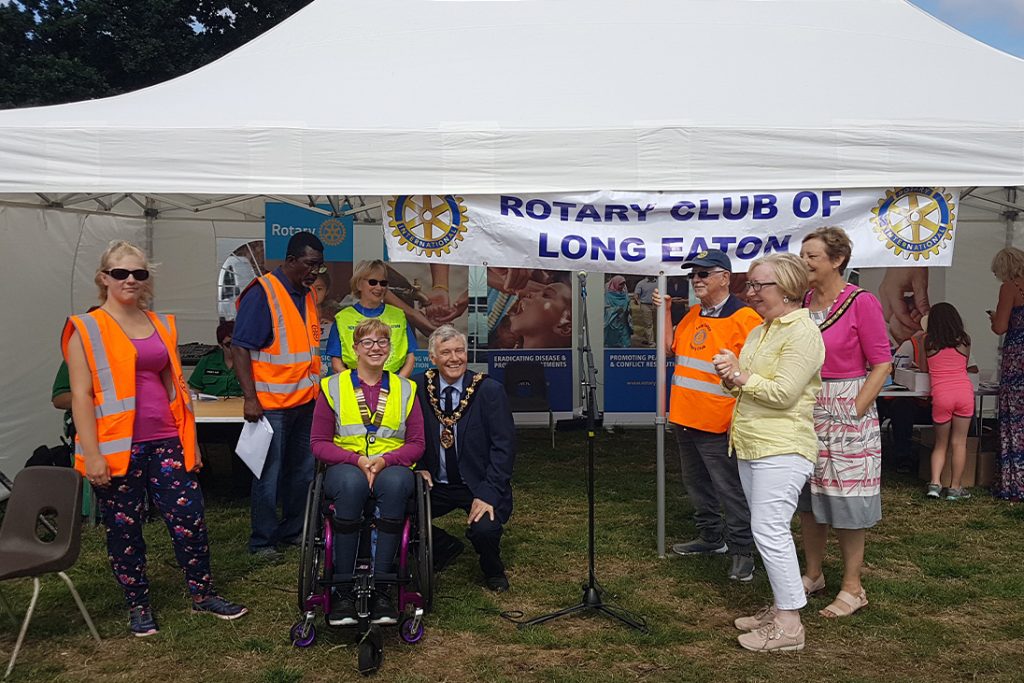 On her reasons for accepting the role, Abbie states: “Being a Rotary ambassador is an amazing feeling as it gives me the opportunity to share my thoughts and my ideas and to give people more opportunities to do activities within our local communities as well as inspiring them to think outside the box.”

As more opportunities come to Abbie as a disabled athlete, she is keen to use her new role to give other people the chance to take those opportunities as well.

Speaking on her future plans as Rotary GB&I Ambassador, she reveals: “One of the things I’m trying to help set up to get disability sports more disabled to people is to allow wheelchair tennis to be at the universities like here [Loughborough] and to be able to give people the opportunity to play.

In the immediate future, Abbie will be competing at The Eastbourne International before taking on the role of baton bearer for the 2022 Commonwealth Games. Hopes of qualifying for both Wimbledon and the 2024 Paralympic Games are also very much on the table for Abbie and her coaches.

However, despite the heavy workload, Abbie will always have a determination to excel not just in her sporting career and studies but also with Rotary where she can empower others to reach their full potential.

She explains: “I think a lot of the determination comes from my family – we’re all very competitive and we are all very determined and driven.

“The people around me always inspire me to be more determined, to be resilient and I think that’s definitely one of the things that makes me who I am.”