In a major milestone in the battle to eradicate polio, it has been announced that two of the three strains of the disease have now been eliminated worldwide.

WPV3 is only the third infectious human disease-causing pathogen to be eradicated in history, following smallpox and wild poliovirus type 2.

This achievement means that two of the three wild polio strains have now been wiped out, an important marker of progress against the disease.

The announcement comes on the heels of recent news that Nigeria has gone three years without a case of wild poliovirus, which means that the entire African region could be certified wild poliovirus-free in 2020.

“Even as we’re addressing major challenges in Pakistan and Afghanistan, we continue to make historic progress that shows us that eradication is possible.

“Today is World Polio Day—a time to reflect on our efforts, how far we’ve come, and the work that still needs to be done to fulfil our promise of a polio-free world.

“It’s important that we remain optimistic and harness the momentum of this good news as we tackle the remaining challenges in the global effort to end polio.”

So far in 2019, there have been 88 cases of polio reported in the two remaining countries where the disease is prevalent; Pakistan (72 cases) and Afghanistan (16).

It’s important that we remain optimistic and harness the momentum of this good news.”

As the number of causes suggest, the eradication programme is facing challenges in these countries.

In Afghanistan, the Taliban have banned health workers from entering communities to vaccinate children. Meanwhile across the border in Pakistan, one health worker and two police guards were killed back in April, demonstrating the dangers being faced.

This is in addition to the spread of misinformation about the safety of the polio vaccine from anti-vaccination campaigners, with rumours circulating that doses of the vaccine had causes children to faint and vomit.

In order to sustain this progress, around 2 billion doses of the vaccine still have to be given to more than 400 million children in up to 60 countries every single year.

This is in addition to the routine immunisations that happen elsewhere around the world, including in the UK and Ireland.

The eradication of wild poliovirus type 3 is a critical step in Rotary’s fight to eradicate polio.”

Without full funding, political commitment and volunteer-led social action, there is a real threat that polio could return, putting children worldwide at risk.

Since 1985, Rotay has contributed more than US$2 billion to ending polio, and has committed to raising US$50 million each year, with that funding matched 2-to-1 by The Bill and Melinda Gates Foundation. 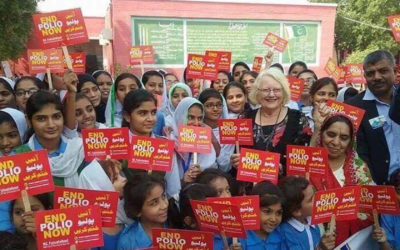