Shrewsbury Severn Rotary has been busy supporting the Ukraine crisis as well as setting up their ‘Don’t waste your food at home’ campaign, partnered with the Shrewsbury Food Hub.

Shrewsbury Rotarians have unanimously agreed to donate £2,000 to support the Ukraine refugee crisis ‘as urgently as possible.

The Ukraine donation will be made through the Rotary Foundation of the United Kingdom Disaster Response Fund. This allows for the addition of 25% gift aid on eligible donations meaning that a £1 donation becomes £1.25.

Club President John Yeomans commented on his club’s perseverance in providing endless support to all impacted by the war in Ukraine.

He said: “We stand with the people of Ukraine and members are unanimous in supporting the ongoing humanitarian crisis as urgently as possible.

“Anyone locally who wishes to turn their passion and ideas into lasting effect is also welcomed to join us.”

The club is also appealing to Rotarians as well as local communities to reduce their food waste. With the current climate change crisis, food waste is the third-largest determinant of the increase in greenhouse gasses.

We stand with the people of Ukraine and members are unanimous in supporting the ongoing humanitarian crisis as urgently as possible.”

Kate Hudson, who is the trustee of Shrewsbury Food Hub, attended a club meeting and spoke about what the hub does and the impact it has had on reducing food waste in the area.

She said “The Shrewsbury Food Hub had saved over 172 tonnes of food going to landfill last year.

“Instead, the food has been distributed to over fifty community groups including schools, The Ark, Women’s Refuge and lots of other charities for those in need.”

Kate was initially visiting the club to receive a cheque for £2,500 from the 2021 Rotary Tree of Light. She described this as being extremely important because at Christmas the food hub collected more food than at any other time.

She was joined at the meeting by two other beneficiaries of the Tree of Light, Andrew Young of the Harlescott Grange Community Hub charity based in Kynaston Road, Harlescott, and Sarah Carline of Severndale Specialist Academy Futures.

Kate explained that the next step for the hub was to stop food waste through an education programme, which she hopes will gain plenty of support.

During the presentation, a group of Shrewsbury Rotarians have been invited by Kate, in the name of the food hub, to a forthcoming open day to personally see how they operate.

Both the Harlescott centre and Severndale Futures also received cheques for £2,500 and each of the three presentations was made by Shrewsbury Severn Rotary Club president John Yeomans.”

Andrew Young from the Harlescott community hub explained that the donation they received will be used to get the centre fully refurbished and operational. As well as sustaining its upkeep and running costs, providing a safe space for the local community groups.

Sarah Carline also explained that Severndale Futures Academy which works with young people, some of whom have severe learning difficulties and disabilities helps the young individuals go into paid employment and independent living.

The academy will be using the donation to build up new enterprise activities to try to support employment opportunities that have been severely cut during the pandemic.

Both the Harlescott centre and Severndale Futures also received cheques for £2,500 and each of the three presentations was made by Shrewsbury Severn Rotary Club president John Yeomans.

To find out more about Shrewsbury Severn Rotary and its projects contact the club here. 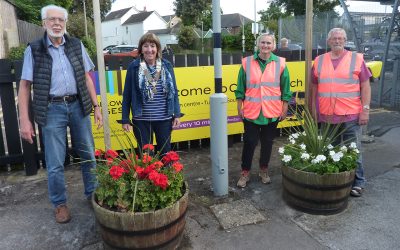 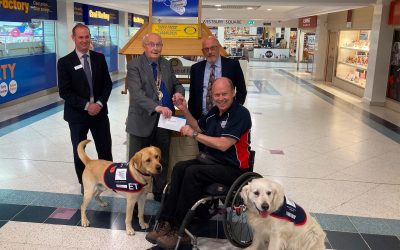 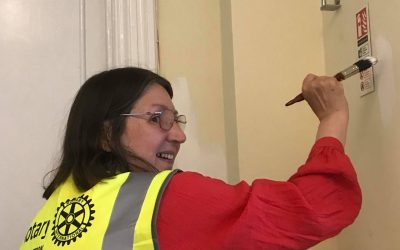 Through some simple gardening and decorating, a Rotary club in the South of England has totally transformed two important community spaces.